New Delhi: Thiruvananthapuram remained at the top of the Annual Survey of India’s City-Systems (ASICS), which highlighted inadequacies in urban governance that could affect public service delivery and quality of life.

Pune came second in the 2016 survey, rising two spots from the last edition. Bhubaneswar was the biggest gainer, rising eight notches to the 10th spot in the survey, thanks to reforms such as instituting of municipal cares. Bengaluru dropped four places to rank 16. 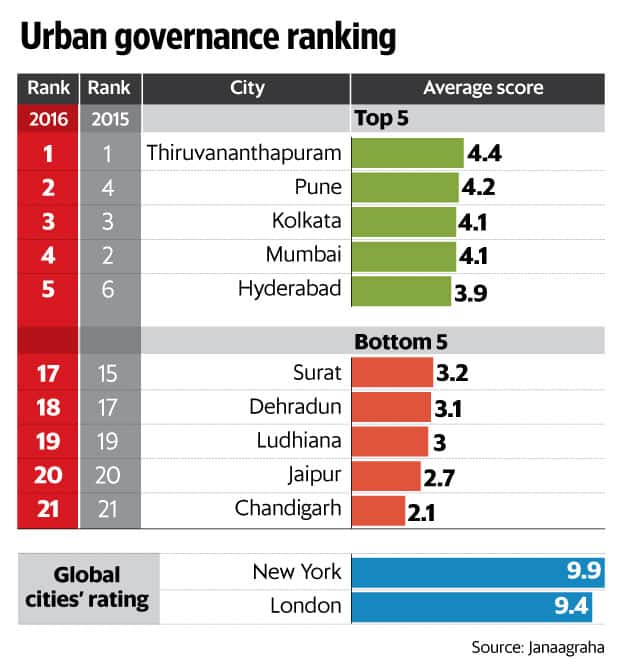 The survey conducted by Janaagraha Centre for Citizenship and Democracy, a non-profit organization, looks at 83 governance patterns to rank 21 cities across 18 states.

“Notwithstanding these changes in scores, India’s cities have continued to score low over the last four editions of ASICS," Janaagraha said in a statement. “This indicates that progress on fixing city-systems has been slow. This is particularly worrisome, given the pace at which India is urbanizing and the already poor state of public service delivery in urban India."

The survey indicates that cities in India continue to score poorly across their city-systems framework with their average scores of between 2.1 and 4.4 on 10. London and New York score 9.3 and 9.8 on the same parameters.

“There has been no substantive change in India’s cities over the past four years. This is frightening because it also means that there is no change in the quality of lives of people. This survey is a health diagnostic for cities which can help city leaders fix root causes," said Srikanth Viswanathan, CEO of Janaagraha.

“Symptoms and short-term fixes are important but (it is) time to focus on medium- and long-term changes for our cities," he added.

The major parameters include urban planning and design, urban capacities and resources, empowered and legitimate political representation, and transparency, accountability and participation.

Chandigarh ranked the lowest among 21 cities for the third year in a row. Except Hyderabad and Pune, no city in India conducts citizen satisfaction surveys. Thiruvananthapuram is the only city to have an ombudsman for issues related to public service delivery.

The survey said Jaipur was able to improve its score due to the passage of the Rajasthan Urban Land (Certification of Titles) Bill for better land utilization.

The survey said strong urban governance was linked to service delivery. It said Indian cities are not financially sustainable and do not generate enough revenue to cover even staff salaries.

“There is a need for an overhaul in the way we plan our cities. We do not have a real governance structure in place. Local bodies are unable to even pay salaries. Local bodies need to be empowered to improve the overall governance of cities," said Debolina Kundu, associate professor at the National Institute of Urban Affairs.