Current account deficit was $22.3 bn in the three months to Sep, compared with $18.9 bn year-ago quarter

New Delhi: India’s current account deficit widened to a record 5.4% of gross domestic product (GDP) in the second quarter of the current fiscal year from 4.2% in the year-ago period, signalling the country’s increasing vulnerability to external shocks.

The rise in the current account deficit to $22.3 billion from $16.4 billion was mainly on account of a widening trade deficit and a slowdown in inward remittances from overseas Indians, Reserve Bank of India data show.

The trade deficit in the September quarter expanded to $48.3 billion from $44.5 billion in the year earlier as exports declined faster than imports. Merchandise exports contracted 12.2% to $69.8 billion from $79.6 billion. Merchandise imports fell 4.8% to $118.2 billion from $124.1 billion.

“The initial estimate of the current account deficit is substantially higher than our expectations. To a limited extent, the performance of exports is expected to display an improvement in y-o-y terms in H2FY13, benefiting from a favourable base effect as well as the measures announced recently by the government," said Aditi Nayar, senior economist at the rating company ICRA Ltd. “Nevertheless, the magnitude of capital inflows in the remainder of the year will crucially impact the ability to finance the current account deficit."

Inward remittances grew marginally to $7.72 billion from $7.18 billion in the year-ago period.

Separate data released by the government showed that India’s external debt stood at $365.3 billion at September end, an increase of 5.8% over the level at the end of March.

The rise in external debt is largely due to higher non-resident Indian (NRI) deposits, short-term debt and commercial borrowings, the finance ministry said in a statement. 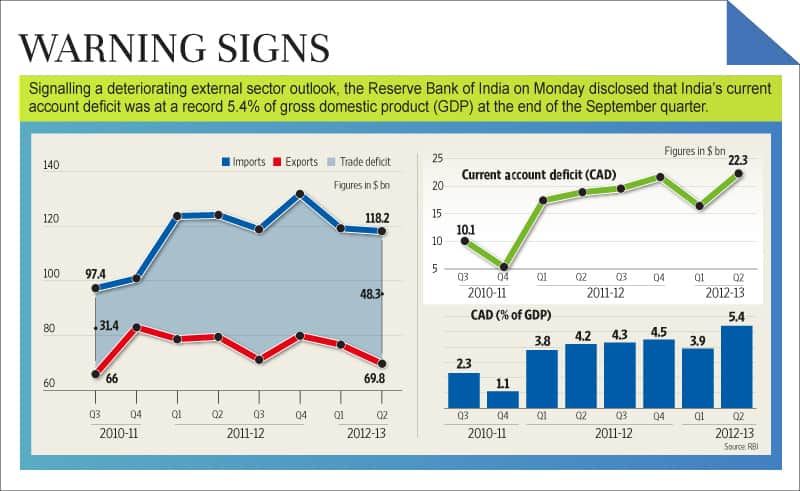 While the share of short-term debt was 23.1%, the remaining was long-term debt.