Vasundhara Raje has not only squandered the mandate but, to my mind, has betrayed it because no other party since independence had got that kind of mandate, says Sachin Pilot

New Delhi: Tackling rural distress will be the first priority of the Congress if it is voted to power in the Rajasthan assembly polls, expected to be held later this year, Sachin Pilot, the party’s state chief said in an interview with Mint.

Pilot also spoke on the preparedness of his party for the upcoming polls, the issues in the elections, booth level management and rivalries within the state unit. Edited excerpts:

What are the big issues in the upcoming elections?

The Rajasthan government got a huge mandate in the previous assembly elections. Vasundhara Raje has not only squandered the mandate but, to my mind, has betrayed it because no other party since independence had got that kind of mandate.

For the first time in Rajasthan’s history, 150 farmers have committed suicide. It is a desert state. We have had droughts for about 80% of time since Independence. But never have people actually taken the step of committing suicide. This horrific cycle of farmer suicide has been going on unabated.

She had announced jobs for 15 lakh people in Rajasthan—it is a manifesto documented by the BJP (Bharatiya Janata Party). More than 620 promises were made 4.5 years ago in the yatra that she did. The majority of them remain unfulfilled. More than the farm distress and unemployment plaguing the state, it is the corruption that is so deep-rooted now at every level.

The overall situation is very, very alarming and I am of the view that when polls are called, we will get overwhelming blessings of the people and we will be able to serve them for the next five years.

You spoke about special status package. Will it be an election issue if the Congress comes to power?

There were claims that Rajasthan has been brought out of the “Bimaru" categories of states. But NITI Aayog has completely discounted that argument...what has happened now is that Rajasthan does require special attention. It is a border state. We are a drought-prone state. We are a state facing a huge agrarian crisis; certainly much more needs to be done.

The Congress faced one of its worst defeats in Rajasthan in 2013. You took over soon after that. What is the mood of the party cadre right now?

Truth be told, we were reduced to 21 seats out of 200. There are 34 reserved constituencies but we failed to win even a single seat. We lost so badly and the party had asked me to go at such a time to become president of the state unit. I have to admit it is a very challenging and daunting task.

I decided that I am not going to wait for the election year, I am not going for anti-incumbency to build because we must work and campaign on a positive agenda. Psychologically I was in campaign mode from 2014 onwards...I started visiting different areas. It’s a large state, and I have visited every single constituency at least twice. 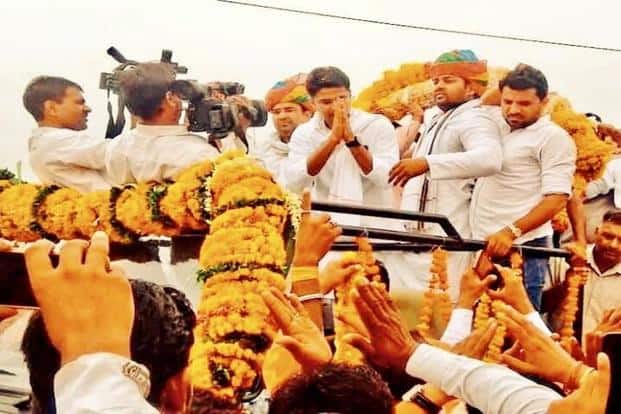 How will the candidate selection be done?

We have focused now on the grassroots because campaigning in the last two months is not as fruitful as building the booth-level workers and network. We have started the ‘Mera Booth, Mera Gaurav’ campaign and we have finished 160 constituencies out of 200. We have identified up to 20 people in every booth.

There is a project called Project Shakti, under which we are enlisting people through their election ID cards. There are around 49,500 booths in Rajasthan. We need a strong team in every booth. If we win the booth, we will win the constituency.

We are very open for candidate selection—winnability should be the biggest criteria and I think younger people, educated people, people with commitment to the party and to the state should be given a chance to contest the elections. But we will have a good mix of experience and youth.

Will the Congress be making an announcement on farm loan waiver in its campaign?

This government has announced some sort of farm loan waiver. The implementation is very faulty. We will do everything under our power. The first step that the Congress would take after forming the government is to make sure that the farming community gets relief. It’s about changing the ecosystem, whether it is fertiliser supply, cold storages, supply chains or mandis.

The condition of the farmers has only become worse. Our topmost priority will be to stabilise agrarian distress, to give a lending hand of support and help to the farmers and action should be taken in the first year of government. There is no point doing things in the last year because it is only about piecemeal efforts.

We want to take long-term steps—irrigation, procurement, supply chains, fertilizer, seeds, technology—and give farmers credit. This will be our first priority— to elevate the farmers from the current stress they are facing.

What are some of the key social formulations which the Congress will focus on in this election?

The downtrodden communities, financially weaker sections, Dalits and tribals form a large chunk of Rajasthan’s population. Unfortunately, it’s not just about policies of the government and slogans—on the ground there are brutalities against Dalits.

A fear psychosis is being created...there are caste clashes, communal issues are coming out, it is being done to shift the focus from the real issues.

What are your views on alliances with smaller parties in Rajasthan?

For the last four-and-a-half years, we have worked together on various issues...But specifically for seat-sharing and electoral alliances, so far there has been no such discussion. The Congress party is strong enough in every constituency to defeat the BJP, that is what our assessment is. But we have always been ready to fight the BJP, take on the BJP with like-minded forces and political parties.

Will the Congress announce a chief ministerial candidate in this election?

I have been a lucky president to get the support of all leaders of the state and it has not been a one person show, but it has been a team effort and that is the reason why the Congress party is on the threshold of defeating the BJP.

What are your views on allegations of differences between Congress leaders in the state unit?

I have worked with all of them as president for last five years, I have known them since I was very,very young. The real tension that we have seen is apparently between (BJP president) Amit Shah and Vasundhara Raje.

There has not been a single gesture, statement or incident, nothing (in the Congress) of that sort has ever come out that will give you the feeling that there is any kind of tension...We will fight the election as a team. We have to bring the Congress back to power, that is the single most important agenda for everybody.