New Delhi: In 2010, subject to government approvals, Indian farmers will seed their fields with transgenic brinjals—brinjals with a genetic variant that, courtesy Monsanty-Mahyco Ltd and a clutch of agricultural universities, protect them from insects. But 14 years ago, Polumetla Ananda Kumar successfully planted the first Indian transgenic brinjals in a field in west Delhi.

Then he promptly burnt the entire crop to the ground.

Kumar, head of the National Plant Biotechnology Centre at the Indian Agricultural Research Institute (IARI), carries no connection with Monsanto’s development of the so-called Bt Brinjal. In fact, when he returned to India after a fellowship stint in Germany in the early 1990s, he was “clueless" about Bt and transgenic technology. “My expertise was in nitrogen enzymes. But my boss said I’d get grants only if I worked on genetic engineering," he says.

This heated emphasis on genetics came from the Indian government. After the Green Revolution in the 1960s, the yields of rice, wheat, chick pea and vegetables had begun to decline, and groundwater had become laden with pesticide runoff. Genetics could, it was felt, tilt the balance back towards productivity and health.

Accordingly, Kumar immersed himself in transgenics, which allows scientists to winkle out a piece of DNA from a common bacterium called Bacillus thurungiensis (Bt), modify it, and inject it into a plant. This induces the plant to release a toxin that kills lepidopteran pests such as the fruit-and-shoot borer, scourge of the brinjal. 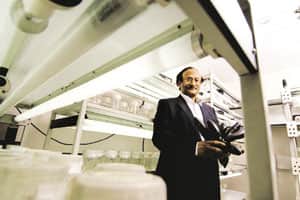 The choice of the brinjal as a candidate for transgenic testing wasn’t arbitrary. Though technologists ultimately aim to improve rice and wheat, their complex genomes makes it harder to integrate foreign genes. “It was much easier to handle vegetables," Kumar says. “If you discount the potato, the brinjal is the most widely consumed vegetable, and it sustains earnings for many small farmers. That’s why it won over cauliflower and cabbage."

But the early years weren’t promising. The Bt bacterium has roughly 150 different genes that work against specific insects.

Genes have to be suitably modified so that the plant accepts them. “We didn’t know that then," says Kumar. “So we had to get this gene—cry1Ab—from the Plantech Research Institute in Japan."

In 1996, Kumar’s team planted test brinjals in an IARI field, without formal approval from the department of biotechnology. “We had the approvals, but there was some miscommunication between us and the department, and we didn’t get the signed approvals in time," Kumar says. “Also, the brinjal season was drawing to an end. We were in a hurry."

Consequently, word spread that “illegal" trials were under way at IARI. Kumar still keeps, in his office, a heavy blue file full of newspaper clippings, including a 1996 report in The Times of India, on the unapproved trial and several stories about the “dangers" of transgenic crops.

The government ordered Kumar and his scientists to cease testing and burn their crop. “All that put me off Bt brinjal for a couple of years."

When Kumar resumed testing in 1998, all approvals in place, he discovered that the Japanese gene was unsuitable for Indian brinjals. Typically, 50 out of 100 non-Bt brinjals from the field are edible. “With the gene inserted, we could only push it up to 75," he says. “A 50% improvement isn’t good enough."

By 2002, when Bt cotton was already being cultivated commercially, Kumar had found three other genes that could better protect India’s brinjals. “One of them was licensed to Bejo Sheetal, a West Bengal-based seed company, in 2005, and they’re now in advanced trials," he says. “They should be available by 2011 or 2012."

Kumar is unruffled by Monsanto Co.’s imminent version of the transgenic brinjal. “There was never any competition. They're a private company and can do things faster. At the end of it, if we’ve made better genes, it’s the farmers that stand to gain."

This progress aside, the controversy over genetically modified seeds remains as alive as it was in 1996. Even though India’s apex regulatory body gave Monsanto-Mahyco, a biotech seed company, permission to commercially grow Bt brinjal last October, protests from environment activists and some scientists, questioning the safety of such crops, prompted Union environment minister Jairam Ramesh to hold back approval.

To many, this is inexplicable. “There’s nothing inherently wrong with genetic engineering...to improve crop yields," says R.R. Singh, a senior scientist at the department of biotechnology. “Now the questions must shift to a different level—which crops do we tackle next; can we develop drought-resistant varieties, etc."

Nobody could agree more than Kumar. “There’s nothing more natural than transgenics. In fact, it’s nature’s largesse that we have a gene, naturally available, to specifically eliminate these pests without harming even another beetle, let alone humans."