Hong Kong/ Mumbai: With a resounding Uttar Pradesh victory behind him, Prime Minister Narendra Modi turns his attention back to policies this week. One area key to watch for investors: progress on resolving a mountain of bad debt that’s restraining the private economy.

Modi, who swept to power in the general elections in 2014 and this weekend notched a decisive win in Uttar Pradesh and Uttarakhand, has championed reforms for businesses yet overseen an expansion that’s been propelled by the public sector. Key to that shortfall has been a decline in credit exacerbated by the lack of a national plan to clean out non-performing loans.

“Loan growth has been falling and remains anaemic by historical standards as a result of the banks’ asset-quality challenges," said Swee-Ching Lim, a portfolio manager at Western Asset Management in Singapore who’s been analyzing credit markets for almost two decades. “This lack of credit growth will likely continue to be a headwind" for India’s economy, he said. 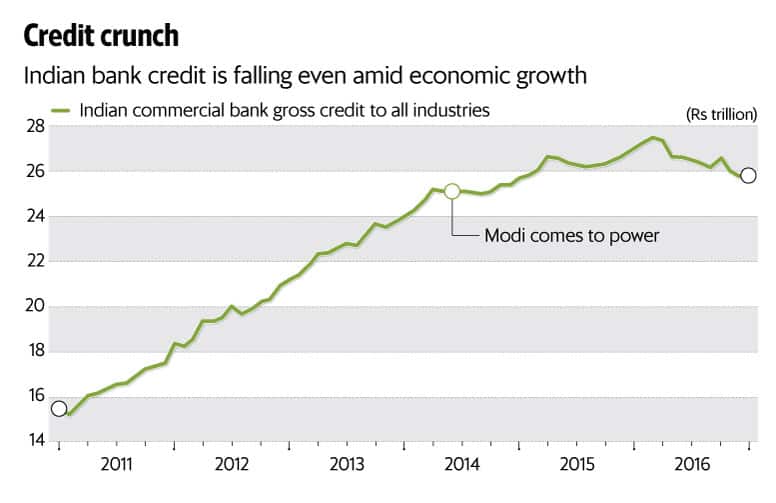 Dealing with the surge in bad loans—which now stand at 16.6% of the total at Indian lenders—will offer critical support for the Modi administration’s claim that it has assumed the mantle from China as the emerging world’s top growth story.

It involves a key test of India’s institutions and whether they can coordinate in the way that China did at a similar stage of development two decades ago.

While China’s one-party system offered it the authority to dictate a solution, India has a panoply of central actors including elected politicians, career central bankers, government officials and state-owned bank executives, along with state interests to accommodate. In China’s case, policy makers set up four state-owned asset management units to take on bad debts, and credit growth resumed within a couple years.

In India, hopes of a bad-debt resolution have stoked financial shares, with the biggest five banks by market value outperforming the benchmark S&P BSE Sensex the past year on hopes of a bad debt resolution. State Bank of India, the second largest, rallied 51%, compared with 19% for the index.

Now that Modi’s party has padded his political capital with a win in the Uttar Pradesh state election, the government is “more likely to tackle the pressing issue of non-performing loans," said Jan Zalewski, a senior Asia analyst at global risk firm Verisk Maplecroft.

Policy makers know a bank clean-up is critical to kick-start investment, but have “not had the political courage yet to push on this front," he wrote.

Years after India’s non-performing loans started to surge, officials are still trying to come up with a solution. Top government advisers, including Arvind Subramanian, has called for a state-run fund manager to deal with soured loans by buying them from banks and working them out through swaps for equity, stake sales or write-offs—much as China’s units did.

A newly appointed Reserve Bank of India deputy governor, Viral Acharya, has also endorsed the idea of a national asset manager to take over unviable assets.

Fitch Ratings Ltd. puts India’s recapitalization burden at $90 billion by 2019, while the government has committed only $10 billion in fiscal resources. 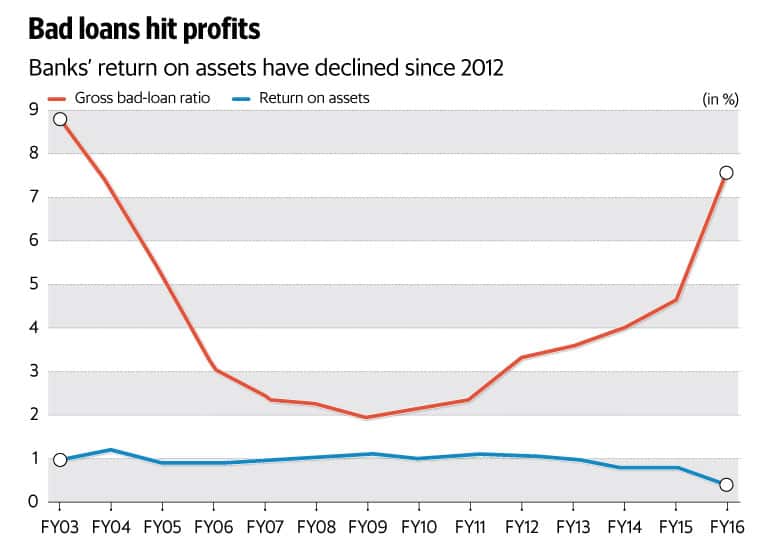 The bad-loan hangover dates from early this decade, when optimism ran high that India could sustain 9% or even 10% economic expansion rates amid a “super cycle" for commodities and emerging markets.

Some of the rash of credit extended for infrastructure and power plants soured as growth slowed and projects got snarled in their execution.

“One key challenge is Indian banks are not ready to take big haircuts on their loans because they haven’t built enough provision for it," said Alka Anbarasu, a senior analyst at the financial institutions group at Moody’s Investors Service in Singapore. “But if India wants to grow, banks will need to fix their balance sheets." Bloomberg