"storyDirectUrl"
OPEN APP
Home >Politics >Policy >UP elections: Why it is a tall order for BJP, BSP to beat the Congress-SP alliance

UP elections: Why it is a tall order for BJP, BSP to beat the Congress-SP alliance

Samajwadi Party and Congress alliance has converted Uttar Pradesh elections into a three-cornered contest, increasing the threshold required to win a majority

For a couple of decades now, elections in Uttar Pradesh (both at the assembly and national levels) have seen four-cornered contests, between the Samajwadi Party (SP), the Congress, the Bharatiya Janata Party (BJP), and the Bahujan Samaj Party (BSP). As we have seen earlier in Election Metrics, a feature of a four-cornered contest is that a party can win a large majority of seats with only a small vote share. 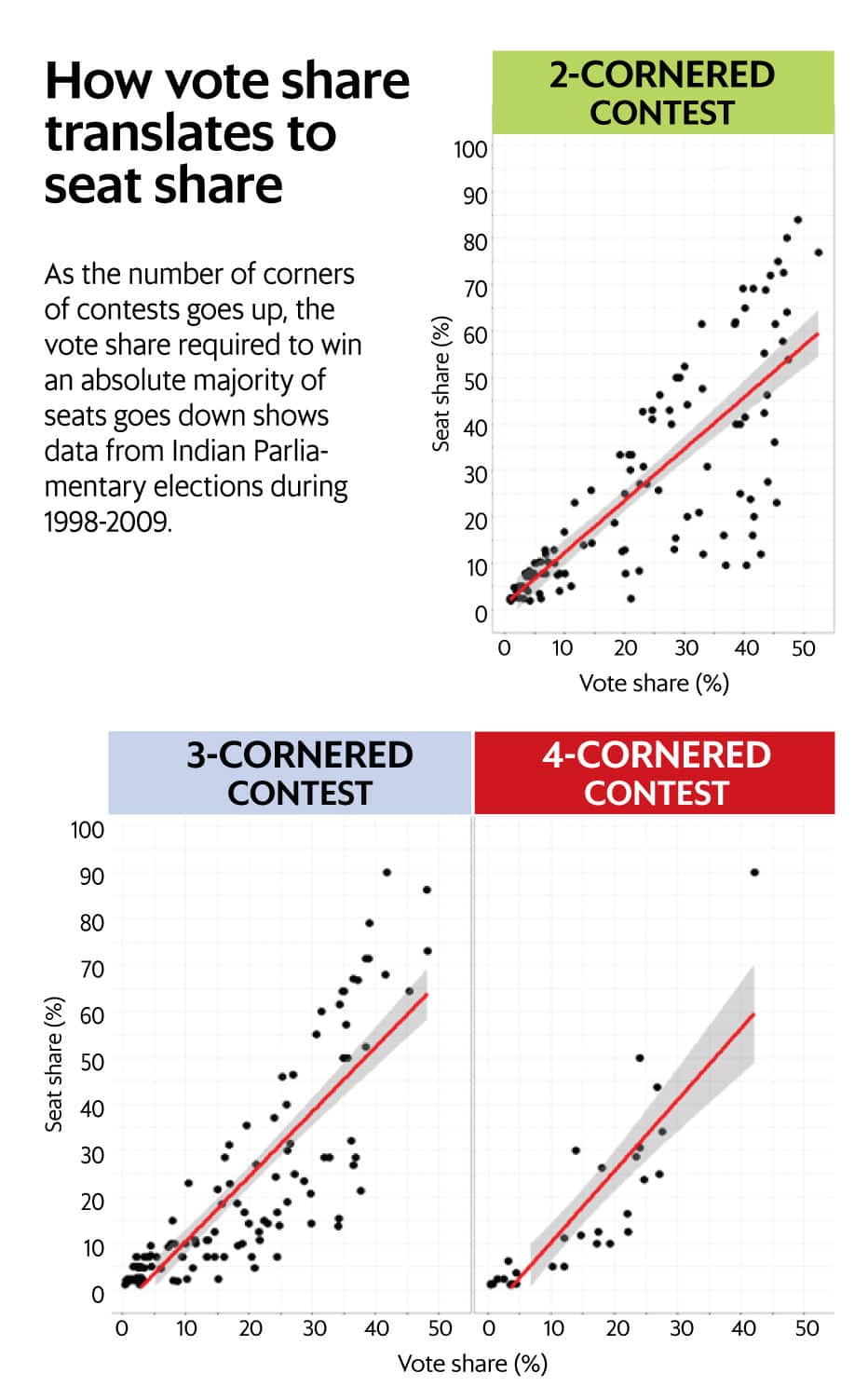 The four-cornered contest has also meant that parties have been able to win absolute majority in the UP assembly with only a small vote share. In the last elections in 2012, the Samajwadi Party got just 29% of the votes, yet ended up with a comfortable 223 out of 403 seats. Five years earlier, the BSP with just over 30% of the votes won 205 seats.

By tying up, the Samajwadi Party and the Congress are converting the election into a three-cornered contest, and this dramatically ups the threshold required to win an absolute majority. Going back to the Election Metrics piece from January 2014, a party will need at least 35% to 40% of the votes to win an absolute majority in a three-cornered contest, making it harder for the BJP and BSP.

From a sheer numbers point of view, if the Samajwadi Party and the Congress had tied up in any of the last three elections, the alliance would have secured a comfortable majority in each of them (including in 2007 when the BSP got a simple majority). In fact, in 2012, if the Samajwadi Party and the Congress had got together, the alliance would have got a whopping three-fourths majority in the House, with 317 seats. That suggests that it will take a significant vote swing away from the alliance in order for it not to get an absolute majority. The extent of this required vote swing is a function of which other party manages to capture these votes.

On the other hand, if the BJP were to be the beneficiary of all the votes moving away from the alliance (probable if we were to go by the 2014 general election results), it would take a 11 percentage point swing for the Congress-Samajwadi Party alliance to fall below the halfway mark (this result is skewed by the BJP’s poor performance in UP assembly elections in the last 15 years). And, in case the votes moving away from the alliance were to be equally divided between the BJP and BSP, the vote shares of the alliance would need to decline by 9 percentage points for it to lose its majority.

In the context of an Indian election, these are all large numbers (7 to 11 percentage points), so it would take considerable effort to beat the alliance.

However, vote shares in UP have historically been quite volatile, and with matters such as the Samajwadi Party family feud, demonetisation, and Prime Minister Modi’s undeniable charisma further contributing to the uncertainty, nothing can be ruled out.