BJP’s own goal in Himachal Pradesh

New Delhi: The results of Himachal Pradesh elections, while true to the conventional pattern, is not so much a victory for the Congress as it is defeat for the ruling Bharatiya Janata Party (BJP).

Political analysts say it was an election for the BJP to lose given that Congress was fighting multiple charges of corruption in 2G spectrum scam, coal scam at Centre and similar graft charges against its chief ministerial candidate Virbhadra Singh. The Congress also had to weather criticism on its decision to back foreign direct investment in multi-brand retail, the fallout of rampant inflation and capping of subsidized gas cylinders.

“Odds against both the parties were so many. So it resulted in a close fight between the candidates of two major parties. The Congress managed to escape with better micro-management at booth level campaigning, otherwise BJP would have won easily," said political analyst N. Bhaskara Rao.

Out of 68 assembly seats, the Congress and the BJP won 36 and 26, respectively. The remaining seats either went to Himachal Lokhit Party (Hilopa), a political formation floated by former BJP state president Maheshwar Singh just eight months prior to the elections, or to smaller political constituents.

The electoral contest was very keen and an analysis of the results show that the margin of victory was very close. Nearly two thirds of the candidates won with a margin of votes less than 5,000. The lowest winning margin was at Kasauli where BJP candidate Rajiv Saizal defeated Congress candidate Vinod Sultanpuri by mere 24 votes. 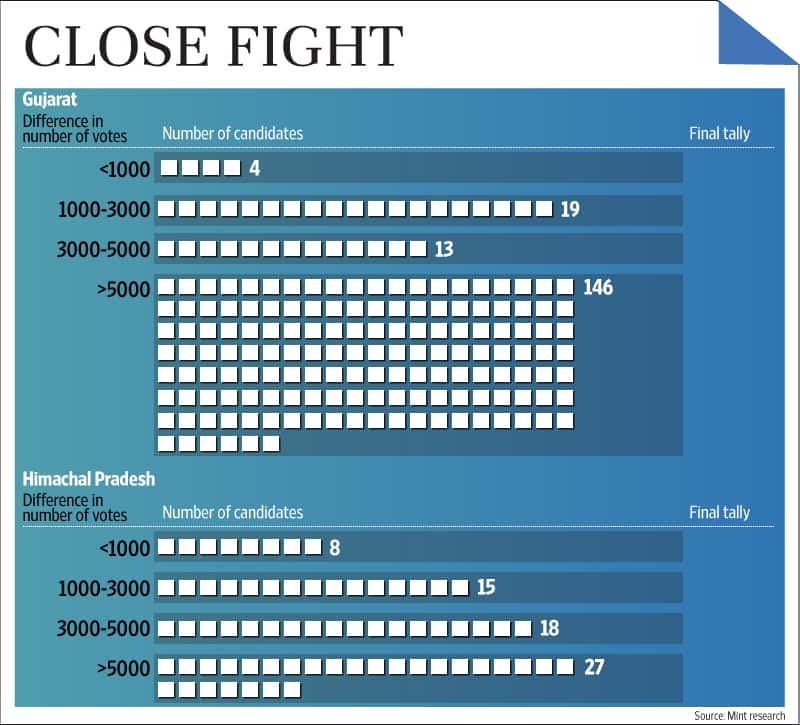 The BJP certainly had an edge over the Congress; an advantage that was offset due to internal bickering over seat distribution between chief minister Prem Kumar Dhumal and other party stalwart Shanta Kumar. The BJP lost votes after Hilopa fielded strong candidates against its own. According to state election commission, 107 rebels from both parties were also in fray and are now seen behind the close contest.

“State elections are still fought on localised issue. Corruption is no longer an issue in the state," Rao added.

BJP leader of opposition Arun Jaitley, while speaking to television news channel NDTV, conceded as much.

“It is a preliminary conclusion," he said, adding: “We lost because of internal factors rather than Congress winning of its own."

A senior party functionary, who spoke on condition of anonymity, said: “We should not have let the formation of Hilopa and let some rebels fight this elections. It was a costly mistake."

The BJP, on the likes of Punjab where its coalition partner Akali Dal for the first time had managed to beat anti-incumbency earlier this year, wanted to repeat its government on the plank of development and by targeting Virbhadra Singh. In 2007 state assembly elections, it had won 41 seats where as Congress won only 23.

After the poll results, Dhumal conceded defeat and said “We will have to find out where we were found to be lacking. We were confident because in the last five years, there was development. Every household in the state had benefited from our schemes. If an ample number of our candidates could not win, we will analyse and assess the reasons," Dhumal said.

Dhumal won from the Hamirpur seat, defeating his nearest Congress rival Narinder Thakur by a margin of over 9,500 votes.