UN monitors pull out of Syria

UN monitors pull out of Syria

Beirut: United Nations military observers left Damascus on Monday after a four-month mission in which they became helpless spectators of Syria’s spiralling conflict, instead of monitoring a ceasefire between President Bashar al-Assad’s forces and rebels.

Seven UN cars were seen leaving a Damascus hotel on Monday morning, carrying some of the last members of a mission which at its height deployed 300 observers across the country.

The unarmed monitors suspended operations in June after coming under fire and most have already left the country, leaving a small ‘liaison office´ in Damascus in case a chance for a political settlement to the bloodshed ever emerges. 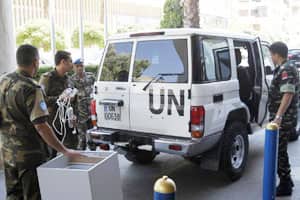 Members of the United Nations observers mission in Syria, who have left their bases in the province of Homs in Central Syria, stand near a U.N. vehicle outside a hotel in Damascus on Monday. Photo: Reuters

The mandate of the monitoring mission, known as UNSMIS, expired on Sunday night after diplomats at the United Nations said conditions for continuing operations had not been met. The last monitors are expected to be out of the country by Friday.

After a brief lull, violence intensified during the monitors’ presence in Syria and at least 9,000 people have been killed since they arrived to oversee a ceasefire declared on 12 April by former UN-Arab League mediator Kofi Annan.

The truce never took hold. At least 18,000 people have now been killed in Syria since the anti-Assad revolt began. At least 170,000 people have fled the country, according to the United Nations, and 2.5 million need aid inside Syria.

Rebels seized control of districts in Damascus and Aleppo last month, as well as several border crossings and swathes of northern territory, before Assad’s forces launched counter-offensives in the country’s two main cities.

On Monday, Assad’s troops backed by tanks tried to retake the Damascus suburb of Mouadamiya from opposition fighters.

According to an initial tally, at least three people had been killed and 20 wounded from tank shelling of the town, a southwestern extension of Damascus on the road to the Israeli-occupied Golan Heights, opposition activists said.

“The offensive began at 6.00 a.m. (0300 GMT). Tanks were dispatched from the al-Mezze airport base and Brigade 555 in Somarieh and have now almost surrounded Mouadamiya," Haya, an activist, said by phone, referring to two nearby military bases.

Syrian troops entered Mouadamiya at the end of last month after a two-day offensive that killed more than 120 people, according to residents and opposition activists.

But then, as in other areas around Damascus, rebels begin to reestablish control after the army pulled out to refocus its efforts elsewhere in and around the capital.

Making his first public appearance after the 18 July bombing which killed four of his top security officials, Assad attended prayers at a Damascus mosque to mark the start of a Muslim holiday on Sunday.

The first day of Eid al-Fitr, marking the end of the fasting month of Ramadan, also gave Assad’s foes a chance to rally and activists reported protests around Syria, including the capital.

Fighting raged on around Syria, killing more than 130 people, an activist group reported.

Assad was filmed at prayer with his prime minister and foreign minister but not with his vice president, Farouq al-Shara, whose reported defection was denied the previous day.

Shaken by the July bomb attack in Damascus and defections - including that of his last prime minister - Assad’s recent appearances on state TV had previously been restricted to footage of him conducting official business. He was shown swearing in the new prime minister a week ago.

With diplomatic efforts to end the war hampered by divisions between world powers and regional rivalries, Syria faces the prospect of a prolonged conflict that threatens to destabilise the Middle East with its sectarian overtones, pitting a mainly Sunni Muslim opposition against Assad’s Alawite minority.

Russia said on Monday evidence had grown that Syrian rebels were “massively supplied with Western-made weapons". The comment by Deputy foreign minister Gennady Gatilov followed others apparently intended to blame Western and Arab countries for the failure to peace efforts such as that led by Annan.

The West has accused Moscow, which sold nearly $1 billion of arms to Damascus in 2011, of giving Assad diplomatic cover by repeatedly vetoing UN Security Council resolutions on Syria.

The United Nations may need to create a “safe zone" within Syria to cope with a swelling exodus of refugees, Turkish foreign minister Ahmet Davutoglu, whose country already hosts nearly 70,000 Syrians, told the Hurriyet newspaper.

“If the number of refugees in Turkey surpasses 100,000, we will run out of space to accommodate them. We should be able to accommodate them in Syria. The United Nations may build camps in a safe zone within Syria’s borders," he was quoted as saying.

The splits in the Security Council pose a major obstacle to the creation of any such UN safe haven.

A no-fly zone and a NATO bombing campaign helped Libyan rebels overthrow Moammar Gadhafi last year. The West has shown little appetite for repeating any Libya-style action in Syria, and Russia and China strongly oppose any such intervention. Reuters