According to data collected by NGO Daksh, time between scheduled hearings can range from 20 to 68 days

A wide variance exists between how a case progresses through various high courts (HCs), according to a study by Bengaluru-based non-governmental organization (NGO) Daksh aimed at understanding how delays take place in the judicial system and how they affect the delivery of justice.

Daksh has collected data from 10 high courts’ daily cause lists—the timetable of cases scheduled to be heard by the court each day—since 1 January, tracking over seven million scheduled hearings.

Daksh co-founder Harish Narasappa said the NGO wanted to work on understanding judicial delays based on data, which has not been done before in India. “We believe that not enough attention has been paid to judicial administration in the country," he said.

“Judicial delays affect all parts of society and not just the performance of the judiciary. Our hope of being a civilised society rests on the judiciary and judicial delays are killing this hope," said Narasappa, who is also partner at law firm Samvad Partners in Bengaluru.

According to the data collected by Daksh, collating all petitions, applications and cases that are listed for hearing before each high court between 1 January and 31 July, the time period between scheduled hearings of the same case can range between 20 and 68 days at different high courts on average.

For instance, the Calcutta high court schedules hearings in cases an average of 25 days after the previous hearing.

By contrast, cases in the Delhi high court can expect to be heard every 61 days on average, while before the various benches of the Karnataka high court, that time period is even greater, at 68 days.

And in the case of civil appeals in the Karnataka high court, there is an average of 88 days between scheduled hearings.

While a shorter period between hearings of cases would intuitively seen like an indicator of the speed of the judicial system, the reality is far more complicated.

Verus Advocates founding partner Krishnayan Sen, who practices litigation nationally and in the Calcutta, Delhi and the Bombay high courts, commented: “If the matters are getting listed in the causelist, that doesn’t necessarily mean that a matter is getting heard."

Narasappa said that a low average number of days between hearings was not in itself a desirable target for high courts to aim for. 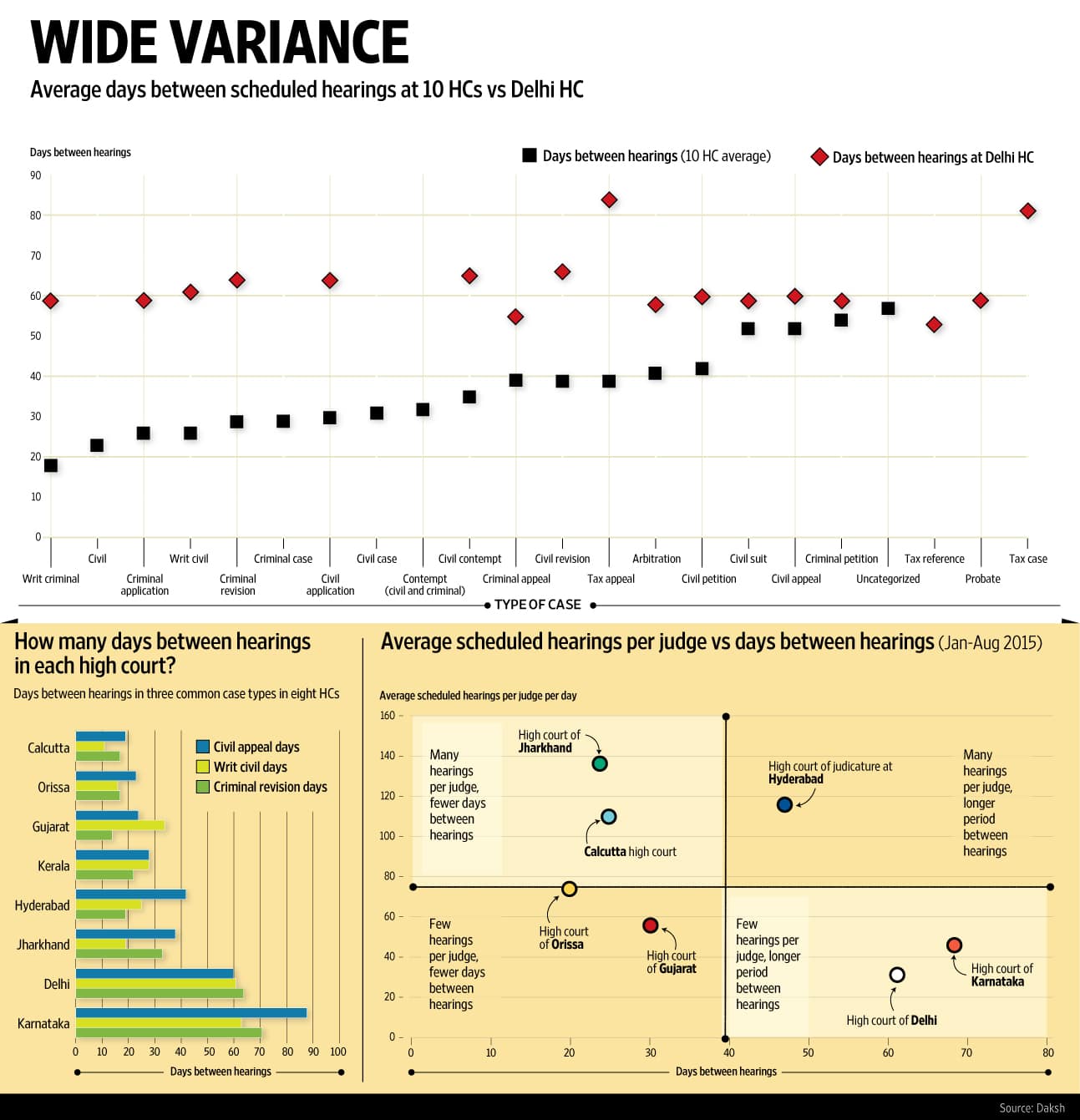 Narasappa added that if a lot of cases are listed for hearing, that also means there is less time per case, which means that “natural justice" does get effected.

Indeed, judges in some courts are facing an almost impossible case load, which has contributed to the number of pending cases at high court level increasing to nearly 4.5 million by the second quarter of 2014, according to data released by the Supreme Court (an increase of more than 22,000 cases against the first quarter of 2014).

At the Calcutta, Kerala and Jharkhand high courts, for instance, the case load per judge is comparatively higher with between 4,000 and 6,000 cases scheduled before them on causelists between January and July 2015, according to Daksh data.

“In my view, it’s not the number of days (between hearings), but what happens on those days that matters. If we look at the day, more number of hearings generally means that there is no sensible basis on which dates are given," said Narasappa. “What is the point of listing 60 matters per day?"

“There is a serious impact on the quality of justice delivered as (it is) really impossible to do justice to all these 60 matters. This also means some matters are listed but never heard, which is a huge waste of time for lawyers and the court."

The two high courts with the fewest scheduled hearings per day—the Delhi and Karnataka high courts, where there were, respectively, only 2,200 and 2,800 cases scheduled before each judge between January and July 2015 on average, according to Daksh data—have the longest average time period between hearings, suggesting that some courts simply allocate too short a time period between hearings.

There is also a major difference in the average number of days between hearings, depending on the type of case dealt with.

The fastest by far are criminal writ petitions, where on average courts give hearing dates less than 20 days away. One reason is that criminal writs can often deal with appeals against a refusal to grant bail, where life and liberty are at stake and courts may be encouraged to move more quickly.

By contrast, civil suits or civil appeals have an average time period of more than 50 days between each hearing.

Despite all courts being overseen by the Supreme Court and operating under similar rules, every high court has its own set of systems.

Bengaluru-based high court advocate Gautamaditya Sridhara explained that in the Karnataka high court, an “algorithmic causelist" prepared by software in the court’s co-called “board branch" is responsible for listing cases on the causelist.

This automatically takes into account the order of filing and the queue of cases before the court. Furthermore, cases older than five years are automatically timetabled at the top of the causelist in Karnataka every day until they are disposed of, in order to get old cases off the books.

There is no real uniformity between high courts and the systems they use to manage their “case flow", suggests one academic who specializes in studying judicial administration, who declined to be named. “Each high court has its own system."

While the Supreme Court issues some directives and uniform rules about how high courts should administer case flow management and how the software should work, each high court commissions its own software, customized for its own circumstances.

The same lack of a standard measure also causes problems in the accuracy of the data that Daksh can collect, since each high court may use slightly different ways of categorizing cases or of listing them.

Daksh co-founder Kishore Mandyam, who is the chief executive officer of PK4 Software Technologies and is responsible for building the technology side of Daksh’s analytics, said: “There is no standardization of the data presented by the various courts, although the systems were all built by the same agency (National Informatics Centre)."

“This is not an issue for an end-user—after all, people deal with cases in one (high court), mostly. But it is an issue for any analysis across the country. And it is also surprising that, having been built by the same company, they’re all built with no relationship among them."

Narasappa said that the data collected was not perfect, but since each high court only provided very basic data on its website, nobody had so far analysed this information or compared different courts’ efficiency.

He said that there was a need for better data and case management if the mountain of pending cases and delivery of justice are to improve.

“The courts are setting themselves up for failure by continuing an age-old method and culture of hearings. There is need to innovate. More judges and fast track courts is not going to help. It is the management and efficiency that needs to change."