Maoists blasted CRPF's mine-protected vehicle using over 50kg of explosives in Chhattisgarh's Sukma, about a year after a dozen jawans were killed in a similar ambush in the district

The attack comes nearly a year after 25 CRPF personnel were killed in a gunbattle with 300 Maoists in the same district.

The CRPF headquarters in New Delhi said that the Maoists were initially repulsed by the CRPF’s Commando Battalion for Resolute Action (CoBRA) at 8am. 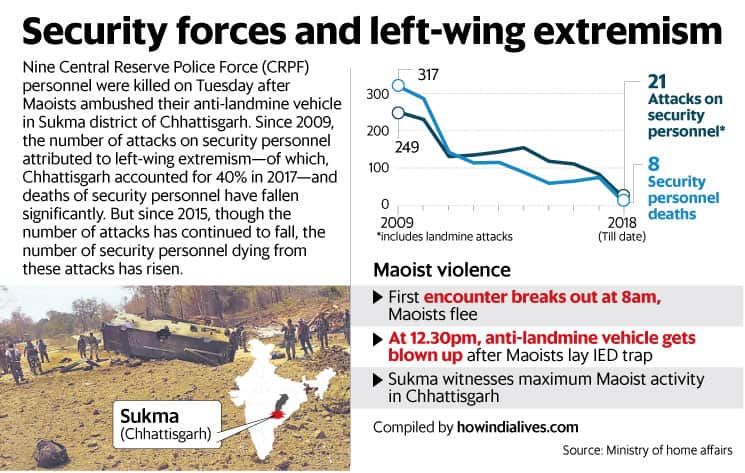 But the militants returned within hours and launched their attack on another CRPF battalion.

“An encounter took place with Naxals at 8am and seeing the response of 208 CoBRA, the Naxals fled away. Again at about 12.30pm, the Naxals targeted another team of 212 battalion of CRPF in between Kistaram and Palodi in Sukma district in which a mine protection vehicle was blown up by triggering an improved explosive device," said a senior CRPF official, requesting anonymity.

Senior intelligence officials said Sukma, which was adjacent to 3,900sq. km of territory with no security presence, would continue to remain the centre of Maoist, or Naxal, activity.

“This entire region is unmanned and it’s the nerve centre of the Naxals. It is miles of jungle territory which even our forces don’t have access to," an intelligence official said on condition of anonymity.

According to intelligence reports reviewed by Mint, Maoists are now expanding their base beyond Chhattisgarh’s Bastar district to the tri-junction of Madhya Pradesh-Maharashtra-Chhattisgarh in order to support their existing strongholds in Sukma and Dantewada districts.