New Delhi: Bangladesh is looking to launch more trade channels with India, increase the number of border markets and open up routes closed since the 1965 India-Pakistan war, to take economic links between the neighbours to the next level, visiting Prime Minister Sheikh Hasina said on Monday.

At a meeting of Indian industry representatives organized by the Confederation of Indian Industry—one of her last engagements before heading home—Hasina called for investments in sectors such as infrastructure, power and energy, transport, manufacturing, food and agricultural processing in Bangladesh.

Hasina was on a four-day visit to India, her first bilateral trip in seven years. On Saturday, India signed two lines of credit worth $5 billion. 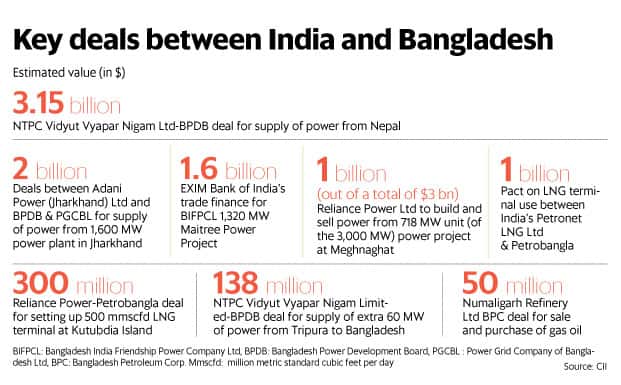 One of the lines of credit, of $ 4.5 billion, is for 17 projects in infrastructure and power, and the other of $500 million is for the purchase of defence hardware—one of the first such lines of credit extended by India to a country in its immediate neighbourhood.

The two countries also signed 13 business-to-business pacts on Monday—mainly in power and energy—valued at almost $9 billion.

“The Indian business community can take full advantage of Bangladesh’s steady economic growth, high demographic dividend, competitive business cost and large consumer base. We have an Indo-Bangla investment agreement in place to protect your investment," she said in her address to Indian industry.

“We are providing attractive packages including 100% repatriation of profit and invested capital. Currently Bangladesh is getting benefits of the Generalised System of Preferences from 38 countries of the world including the European Union, Japan, Australia and Canada. You can also avail of duty-free and quota-free benefits extended to Bangladesh from countries such as China, South Korea, Thailand, Malaysia and Chile. We have a large domestic market of around 140 million people," she added.

Speaking in English and Bengali, Hasina also took the opportunity to slam her political opponents back home who had accused her of “selling off" Bangladeshi interests to India. She described poverty as the common enemy of both countries, calling for a joint fight “to ensure a better life for our people".

The visiting Prime Minister also pointed out that regional and sub-regional cooperation opened up connectivity to expand the market.

The 13 deals worth about $9 billion that the two countries signed include $1.6 billion in trade finance from Exim Bank of India to Bangladesh India Friendship Power Company Limited (BIFPCL) for building a 1,320 megawatt (MW) Maitree Power Project in Rampal, Bangladesh. Under this arrangement, India’s Bharat Heavy Electricals Ltd (Bhel) will get to supply the equipment.

The Bangladesh power ministry and Reliance Power Ltd signed a $1 billion deal covering construction of a 718 MW liquified natural gas (LNG)-based power plant at Meghnaghat, near Dhaka, and sale of power from it. Reliance Power said the company will use equipment procured from internationally reputed original equipment manufacturers previously for its 2,250 MW project at Samalkot in Andhra Pradesh, which will be relocated to Bangladesh in a phased manner.

“Financing of the project is under consideration of Asian Development Bank (ADB) and a consortium of lenders," the company said. The two countries agreed to build this plant during Prime Minister Narendra Modi’s visit to Bangladesh in 2015.