Gurgaon: Tsutomu Omori’s terminal thoughts were executed in meticulous detail. Before the 49-year-old Japanese executive hanged himself with a peach-coloured bathrobe string behind a bamboo grove, 200 steps from his Gurgaon apartment block near Delhi, he left a sheaf of neatly stapled notes by his bedside table.

He scribbled four short messages to his family on the official pad of his company, the local medical systems unit of Tokyo-based Olympus Corp., where he served as managing director of Indian operations. Only the fourth letter was left unpinned, for public viewing—he was sorry for the trouble he had caused, he wrote.

On the morning of 20 February, Omori’s drooping figure was discovered by one of the army of contract gardeners at the gated vanilla-white Icon Apartment complex, dangling from an iron bar on the west side of the boundary wall, near the swimming pool. 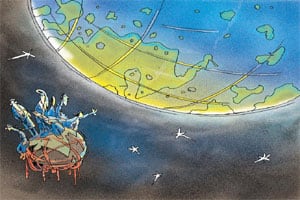 Omori’s was the second such instance of suicide by a white-collar expat executive working in India within three months. In December, Adrian Rowland, a British executive working to set up operations for his company in Chennai, slit his own throat while talking to his long-distance girlfriend on Skype. His suicide was attributed by media to “relationship troubles."

To be sure, these instances aren’t illustrative of a trend; such extreme steps were in both cases perhaps the result of a deeply personal turmoil. But these two episodes have brought into limelight the occupational stresses facing a growing numbers of expat executives who journey to India to cash in on the country’s economic boom.

Dhyan Summers, a psychotherapist who runs Expat Counseling and Coaching Services in New Delhi, says few expat executives come to India emotionally prepared to reconcile the demands of their out-of-country bosses unfamiliar with the “Indian way" of doing business and a local staff who do not necessarily share the same work ethic, leaving them feeling overworked and under-valued.

“They don’t anticipate the degree of isolation—how difficult it can be to bridge that cultural divide. It can be very lonely work," Summers says, adding that many executives pass the night on constant calls to their home offices, which reduces the time they have for themselves and their families. She said these circumstances often affect their personal lives and marriages.

Such challenges of working in a globalized world, where offices run across time zones, may be the universal norm, but appears to be particularly true in India. In international surveys and business reports, India regularly figures prominently as one of the worse places for business, sometimes described as “punishment postings".

In the World Bank’s ease of doing business index, India has been near the bottom of the heap—hovering at 132 out of 183 countries—for four consecutive years. In 2011, Brookfield Global Relocation Services, which tracks global relocation trends by surveying overseas expatriates in senior management positions, named India the second worst country for the “greatest assignment difficulties for international assignees", behind only China.

The problems could range from corruption and bureaucratic red tape to bad infrastructure and services.

A young South Korean, who arrived in India to take up a job at a multinational white goods company in Noida six months ago, rates corruption as the biggest headache. Lounging in a veranda at Gung The Palace, one of New Delhi’s two Korean restaurants on a recent Sunday evening, the 29-year-old accounting executive declined to be identified, but complained of the formidable situations he normally would never have to encounter in his native country.

Within weeks upon arrival, he caught a manager red-handed accepting a bribe from one of the company vendors for increasing the supply order. Last week, a request landed from a local customs officer to make a ‘donation’ to his wife’s school. Then there are the daily frustrations to deal with managers who don’t react to deadlines.

“I wanted the man who accepted black money to leave the company, but everyone said he’s useful, he has good contacts with the government," said the executive. “Patience, only patience and smiles is the only way out in India."

Max Francesconi is an Indian food addict and a culture buff. The Italian businessman sells high-end art mosaics in the country as he criss-crosses between Singapore, Malaysia, Thailand, Indonesia and the Philippines on business. The resident area manager for South East Asia at Sicis, an Italy based company, says that while he has grown to love the country, India has the most challenging work environment among all the countries he visits.

Negotiations, he says, can go on for three to five months here, making it difficult for him to explain to his colleagues back in Italy why it takes so much time to close a deal. “In India, the negotiating phase is never-ending—it’s the longest I’ve ever seen," Francesconi says. “It’s within the culture to hold on, to make you wait. And when you are desperate, they will ask for further discounts."

There are others who find themselves completely at home like Isabelle-Jasmin Roth. After four years of living in Delhi, the managing director at Avantgarde India Pvt. Ltd, the Indian branch of the Munich-based experiential marketing firm, has found a sense of comfort in the chaos of India’s thriving work environment.

But the energetic blonde says that she initially struggled to be taken seriously in a work culture unaccustomed to interfacing with female management. From time to time, she found herself in situations where her male colleagues were mistaken for the boss and occasionally, meetings would take place without anyone really paying particular attention to her, till they found out her significant role in the company.

“Women are perhaps taken less seriously all over the world, but it’s especially true here, even more so if you are not a local,’ she says. “This is not limited to the work place, but also in simple tasks like taking a taxi, where when seated with a male passenger, the driver would look for a confirmation from the male, even if the directions and destination come from a woman."

India’s liberalized economic policies means expatriate executives continue to flock to the country. Amid Gurgaon’s glass-clad high-rises, India’s super symbol of prosperity, multinational companies such as Ericsson, Kyocera Corp., Toshiba Corp. and Panasonic Corp. brandish their presence on billboards along the national highway. In 2010-2011, Gurgaon attracted ₹ 19,635 crore in investment, according to government statistics. An estimated 300 of the Fortune 500 companies are said to have opened offices in Gurgaon.

Yet the city, where speeding BMWs jostle for space with a rush of rickshaws on cramped streets, is hardly a match to superior expat magnet hubs such as Singapore and Dubai, which are eager to court foreign talent by streamlining visa processes, removing obstacles to starting businesses,and building world-class malls, bars and restaurants.

Hovering between modernity and tradition, India still lacks the services and infrastructure, and a night life that many expats have come to rely on to blow off steam after a hard day’s work. “If you want to live a Western style, you still have to hide in the company, in the gym and in five-star hotels," Roth says. While the transition has been smooth for her (she now considers India her permanent home) she knows expats for whom it wasn’t. Embracing local culture and taking set-backs in stride is key to survival, she says.

A 2009 Businessweek survey on “worst punishment posting" ranked Mumbai and Delhi as the fifth and sixth most difficult cities in the world to relocate. The study measured factors such as pollution, disease, political violence and availability of goods and services to measure urban living desirability.

Some believe many of the complaints—climate, crowd, language barrier—tend to be exaggerated and selective in painting an overly dismal picture.

N.S. Rajan, partner, global leader-people and organization, with consulting firm Ernst & Young, says that in today’s globalized environment, it would be counted as a positive experience to be able to get an opportunity to work in and assimilate new cultures.

True, India was viewed as a punishment posting a decade ago, and expat executives got higher packages as compensation to work out of the country. But the world of business has changed since then, and professionals now stand to gain by working in emerging markets.

“All opportunities have trade-offs and, sure, there are attendant problems in working in a foreign culture. But without these experiences you cannot be counted as a global leader. Else, you will remain in your own well," said Rajan.