Another step in China’s project to bring Hong Kong into its bosom is complete and is set to connect the former European outposts of Hong Kong and Macau with the mainland.

The $15 billion, 55-kilometer (34-mile) bridge, which Xinhua says is the world’s longest sea link, will open for traffic at 9 am Wednesday and is tipped to carry some 29,000 cars and trucks daily between Zhuhai on the mainland and Hong Kong, a former British colony. The waters over which the bridge stands now was formerly patrolled by three navies, and the land borders were decades ago guarded by the People’s Liberation Army to mostly keep defectors from leaving.

The project is part of President Xi Jinping’s sweeping plan to knit the so-called Greater Bay Area in southern Guangdong province into a high-tech megalopolis to rival California’s Silicon Valley. It also envisions a better marriage between China’s industrial might and its one-party state and the liberal, capitalist bastions of Hong Kong and Macau, which have their own passports, currencies, trade policies, courts and civil rights. The Greater Bay Area could serve as a new growth engine for the capital markets of Hong Kong, the casinos of Macau, formerly a Portuguese colony, and nearby Shenzhen, the economic powerhouse one of Xi’s predecessors, Deng Xiaoping, built on their doorstep almost four decades ago. The area -- with 67 million residents -- would boast a trillion-dollar economy and eclipse Japan as the world’s fourth-largest exporter, according to HSBC Holdings Plc. The bridge, inaugurated on Tuesday by President Xi Jinping, “would enable Hong Kong and Macau to better leverage the favourable conditions and the unique advantage offered by the mainland" to help engage with the world, Vice Premier Han Zheng said at a function to mark the event in Zhuhai.

The sea bridge is the latest to link Hong Kong directly to the mainland. In September, the city plugged into China’s 15,500-mile high-speed rail network with a futuristic new terminus overlooking the Victoria Harbor. A train to Beijing from Hong Kong now would take nine hours and cost less than half the price of flight ticket. 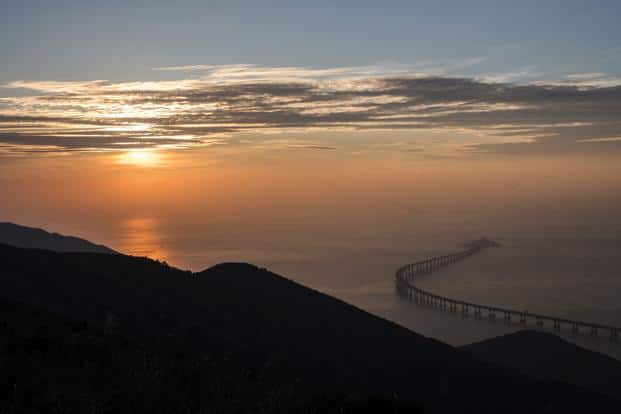 About 400,000 metric tons of steel was used to build the bridge, or enough to build 55 Eiffel Towers, according to the Hong Kong-Zhuhai-Macao Bridge Authority. Bringing the less developed part of Guangdong closer to Hong Kong, the link will help reduce travel time by road to Zhuhai to about 30 minutes, from three hours. The bridge was built on one of the world’s busiest sea routes, where more than 4,000 vessels and 1,800 flights travel back and forth daily, carrying annually more than 20 million people and 1.2 billion tons of goods. The area is also known for strong typhoons each year and rare marine species including Chinese white dolphins.