Karmanye vadhikaraste ma phaleshu kadachana (Focus on the task at hand, don’t let your actions hinge on the outcome).

This quote from the Bhagavad Gita, a poem by Persian poet Mevlana Jalaluddin Rumi and an Irish prayer are what 100 students at Welingkar Institute of Management in Mumbai pondered upon as part of a 10-hour discussion on wisdom. 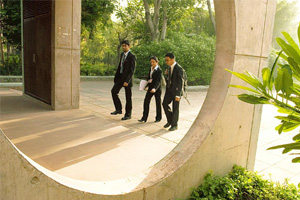 Limited impact: A file photo of Indian Institute of Management, Ahmedabad. One change that schools do see is the realization among students that some sectors, such as finance and investment banking, can be risky. Madhu Kapparath / Mint

The discussion was led by Pradeep Kaipa, faculty member at the Indian School of Business, or ISB, Hyderabad, as an attempt to develop an Indian model of leadership that can be taught and discussed as part of business school curriculum.

Though Kaipa’s research began much before recession hit the world economy, it has gained momentum after the meltdown. “(The recession taught us that) a single-dimensional view of leadership is wrong," says Ajit Rangnekar, dean, ISB, which is supporting Kaipa’s research to map the DNA of an Indian leader.

Although the times have forced foreign business schools such as Harvard Business School to question the relevance of an MBA, such introspection hasn’t been widespread in Indian schools. “Actually not, I don’t think we had an internal soul-searching," says Sourav Mukherji, who teaches at the Indian Institute of Management, Bangalore, or IIM-B, and till recently also supervised campus placements.

Part of the reason for this could be that business schools in India have fared in diametrically different ways in the 2009-10 academic session. While many top-tier government-run business schools added seats to make way for caste-based reservations, tier II and tier III schools have had a tough time filling seats.

“With an acceptance of 1:400, (I) don’t expect a huge internal churning to take place," says Joy Mitra, dean, Faculty of Management Studies, or FMS, Delhi University, which increased student intake from 109 to 140 this year in its core MBA course and will divide the students into two sections for the first time in its history.

The IIMs have similarly increased seats and are building new hostels. At times such as these, any internal quest seems difficult. Also, students say getting into these premier institutes is itself a struggle, and to think beyond it is not possible.

“We have got in. (We will) try to take the maximum we can (from the college)," says Rohan Mahajan, a student of IIM Calcutta, or IIM-C, who will graduate in 2010. IIM-C increased its student strength from 307 to 408 and is housing a few students in dormitories till new hostel rooms are built.

In contrast, tier II schools say admissions this year were tough and they have had to stretch the admission season. This means their entire focus is on filling up seats, leaving little time for introspection.

At Delhi’s Asia-Pacific Institute of Management, admissions to fill up 300 seats stretched to the end of May; they used to close in January or February. The school says a number of factors, including the bad job market, which makes it tough for students to repay bank loans, and a proliferation of business schools, are responsible for stretched admissions. “So, even good institutes are facing problems," says A.K. Shrivastava, the school’s chairman.

Shrivastava says his school, established 15 years ago, chooses students on the basis of their result in the Common Admission Test, or CAT, which also opens the doors for IIMs, and the Management Aptitude Test, or MAT. This year, 20% of students dropped out after gaining admission. He says his competitors are still advertising to fill seats.

One change that schools see is the realization among students that some sectors such as finance and investment banking can be risky. “Sectors which give us returns very fast are also risky sectors," says Mukherji. Schools admit that some changes in curriculum based on the experience of the meltdown are inevitable, but say that structural changes will not take place.

The Financial Times, in a June article, quoted Henry Mintzberg, professor of management studies at McGill University in Canada and Insead in France and Singapore, as arguing that the case study method pioneered by Harvard and taught in most US schools teaches decision making that is inappropriate for younger students, who increasingly make up the population in the US MBA classroom.

Students at IIM Ahmedabad, or IIM-A, defend the case study method of learning management. “Case studies is what makes IIM-A unique. Most of the cases we study are Harvard or IIM-A classics," says Rohan M. Desai, a student of IIM-A and secretary of the cell which interacts with the media. “The case leaves an indelible impression in one’s mind, driving home a concept one can never forget. We have not felt a shift towards reducing the emphasis on case studies."

The premier school, regarded by many as the best for business education in India, talks about some tweaking in the syllabus, such as finance programmes which emphasize risk management and caution in using mathematical models for risk measurement.

But one significant effect of the meltdown will be felt. For perhaps the first time, IIM-A students have the option of attending formal interview sessions as part of an elective on managerial communication offered to students who are about to graduate. Till now, all help to face interviews was informal, though IIM-A has an extensive machinery for job placements.

Some, though, say they cannot fathom why business schools should be burdened with the recessionary weight of the world. “How are the MBAs responsible for this mess? When things go right, too much success is ascribed to this kind of education," says Mukherji, who issued a gag order to his students to prevent them from discussing skyrocketing salaries two years ago.