Delhi L-G does not hold any independent authority in governance and is bound by the aid and advise of the Delhi government, says Supreme Court

New Delhi: The Aam Aadmi Party (AAP)-led Delhi government got a big boost on Wednesday with the Supreme Court ruling that the council of ministers had supremacy over the lieutenant governor (L-G) in governance, except in matters of public order, police and land, which fall under the domain of the L-G’s executive power. 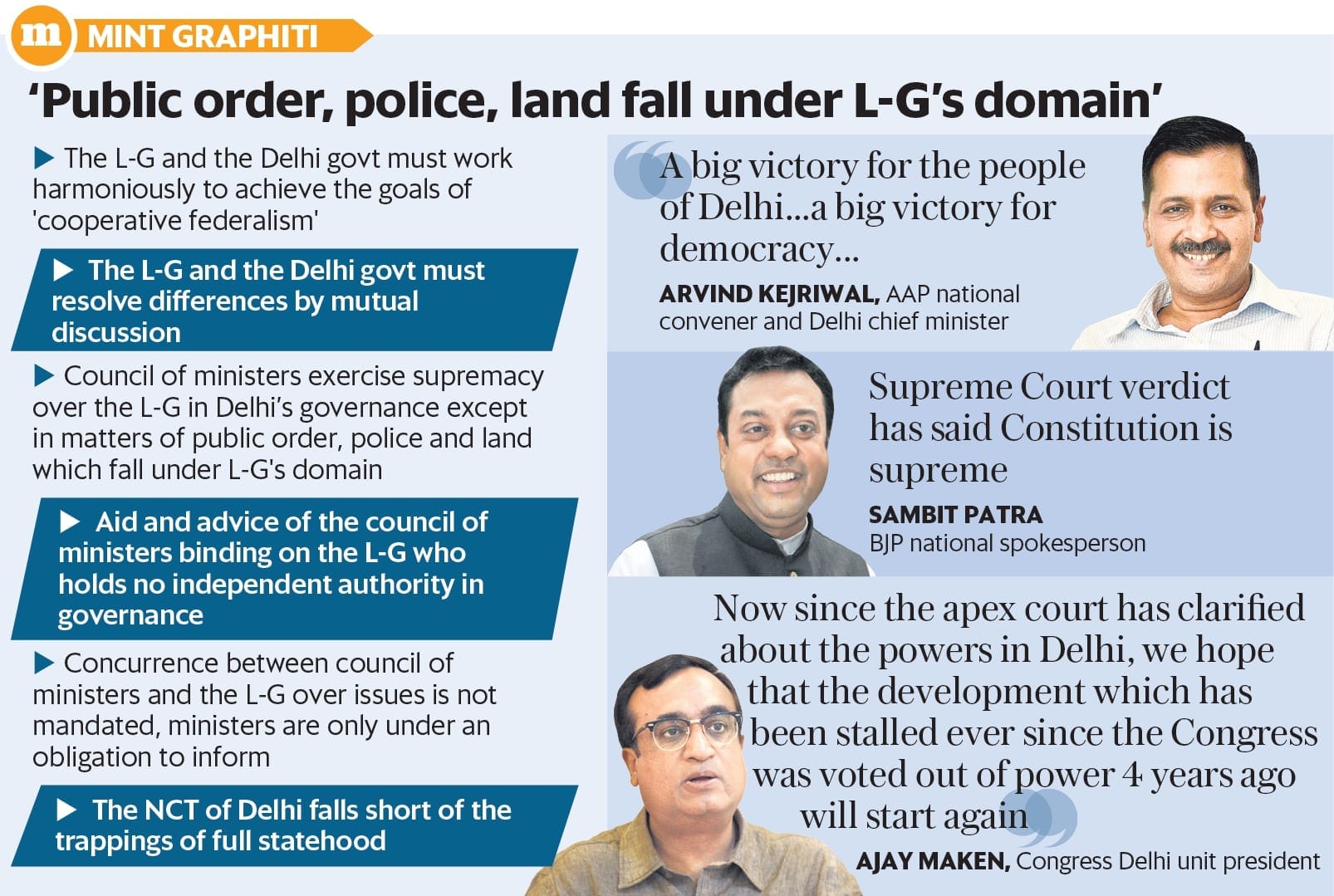 A five-judge bench of the apex court comprising Chief Justice of India Dipak Misra, justices A.K. Sikri, A.M. Khanwilkar, D.Y. Chandrachud and Ashok Bhushan ruled that there was no room for absolutism and anarchy in the Constitution and a balance must be struck to achieve the goals of “cooperative federalism" by working harmoniously.

The verdict, which comes less than a year ahead of the general elections to be held in 2019, is a shot in the arm for AAP, which has been in power in the national capital since 2015. Party leaders have alleged that they have been unable to fulfil their promises because of the interference by the L-G and the central government, adding that no decision could be taken without the approval of the L-G.

“The L-G started to misinterpret the provision and started meddling with the work of the Delhi government. After this order, except three subjects, the order says that the government does not need to take an approval from the L-G on all other subjects," deputy chief minister Manish Sisodia said at a press conference.

The verdict was a victory for the people of Delhi and the government they had elected, he said.

The Delhi government and the L-G have had several run-ins over bureaucratic appointments, security issues and governance.

The Supreme Court emphasized on “constitutional morality" and respect for a democratic government. It held that with matters other than public order, police and land the Delhi L-G did not hold any independent authority in governance and was bound by the aid and advice of the council of ministers who represent the popular will of the people.

The council of ministers are only under an obligation to “inform" the L-G of their decision and “no concurrence is mandated", the court said.

The AAP-led Delhi government wasted no time and held a cabinet meeting on Wednesday in which they decided to speed up work on fulfilling some key promises, including the installation of security cameras across the city.

The government also passed an order on transfer postings where the approving authority for transfers of senior administrative services officers would be the chief minister. In 2015, the Union home ministry had passed a notification to include services as a reserved subject and to make it necessary for the government to consult the L-G on the issue.

The judgement further states that in case of a difference of opinion, an effort should be made by the L-G and the minister(s)to resolve it by mutual discussion. If this process does not yield a satisfactory result, the Delhi L-G may refer the dispute to the President. However, such difference must not be over trivial issues and should not aim at obstructing Delhi governance.

The court also observed that the NCT of Delhi’s position under the Indian Constitution was sui generis, having its own assembly and an administrator in the form of a L-G, but “falls short of the trappings of full statehood".

The curtailed ambit of the legislative and executive power with respect to public order, police and land are consistent with Delhi’s status as a Union territory.