Tax to curb round-tripping of diamonds

Tax to curb round-tripping of diamonds

Mumbai: One industry is happy with a new tax that the government has slapped on it, largely because of its cleansing effect. The imposition of import duty last month on polished diamonds looks set to succeed in stamping out circular trading, the shady financing schemes facilitated by the Indian diamond sector, industry stakeholders said. 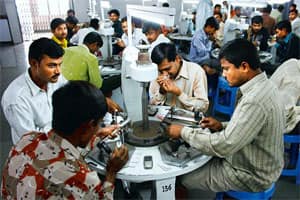 Credibility concerns: Diamond workers at a factory in Gujarat. Circular trading is also used as a conduit in money laundering, said a senior Enforcement Directorate official.

A circular trade occurs when the same parcel of stones is sold over and over and back and forth before entering the retail market, according to Edahn Golan, editor of the Israeli diamond industry trade website IDEX. Until recently, it had been made possible by the lack of an import tax on polished diamonds and cheap export financing in India, he said.

“The Indian government wanted to encourage exports, so it required banks to set aside lending money to finance exporting activities and subsidized them (by offering to lend at relatively cheaper rates)," Golan said. “For the diamond industry, this was very lucrative."

Mint’s David Shaftel say the new import duty that the government has levied on polished diamonds has been welcomed by diamond traders as they hope it will curb the practice of circular trading.

Traders would then export the same goods again, in the process borrowing against the receivables—the diamonds —at a more favourable rate of interest than available through traditional means. This could be done four or five times, he said.

More often than not, the first port of call for circular trades is Dubai in the United Arab Emirates (UAE), where there are no import or export duties on diamonds, said Golan.

With diamond trades, it’s typical that up to 50% of goods sent may be returned because the stones are not uniform and not all would be accepted after a parcel is scrutinized by the buyer, he said. According to Golan, the UAE retained polished diamonds worth only 6.8% of the $12.43 billion exported from India in the fiscal year ended 31 March 2011.

“By the end of February we will see a decline in both imports and exports of polished diamonds," said Ashish Mehta, a partner in diamond trading firm Kantilal Chhotalal, thanks to the duty.

Another type of circular trade occurs when a parcel of diamonds changes hands among three or four entities and the value of the goods—which can be subjective in the case of such stones —is inflated at each stop in order to cover the borrowing rate in the previous country, said a senior Directorate of Revenue Intelligence (DRI) official on condition of anonymity because he’s not authorized to speak to the press. This way, he said, a single consignment of diamonds can generate four times its value in loans.

“This is not the Western concept of one-way transfer," said the DRI official. “It happens because of the ease of cash movement. Financial controls in Asia are a little lax compared with Europe."

Furthermore, entities in places such as Dubai, Thailand and Hong Kong are related to India through cultural or familial ties, but not officially, making it harder to track, he said. “This is global. There is nothing I can do about it."

Sabyasachi Ray, executive director of the Gems and Jewellery Export Promotion Council (GJEPC), said round tripping had tainted the reputation of the diamond industry, although the practice is not unique to India. “It’s not illegal, but it’s considered a problem within the diamond industry. We don’t want the diamond industry to be used as a conduit for this type of financing (by outsiders)," he said.

Globally, diamond traders’ access to credit is transaction-based, Chaim Even-Zohar, of the Israel-based diamond consultancy Tacy said by email and on phone. “By inflating turnover, more credit becomes available. In periods of tight credit availability, or in periods of low industry profitability and minimal margins, round-tripping may also be used to boost working capital. That’s very risky, as failing businesses may use it as a temporary lifeline, only to eventually make bankruptcies more serious," he said.

The new import duty was chiefly a government “revenue-generating exercise" but will also quell the trend, Even-Zohar said.

“Indeed, polished exports from Mumbai to Dubai plunged by some 65% after the measure was announced just a few weeks ago," he said. “If a 2% tax represents an adequate disincentive, the potential margin to be earned on round-tripping must have been reduced greatly and doesn’t make the activity worthwhile any more."

The method is also used as a conduit to convert black money into white, said a senior Enforcement Directorate official on condition of anonymity because he’s not authorized to speak to the media.

For about two decades now, those in possession of money that’s not been accounted for have been sending it to Dubai via hawala networks—the illegal banking system that facilitates the flow of money in and out of the country. The process involves the money being deposited there in the bank account of a diamond dealer. A parcel of diamonds is then sold by that company, that’s paid for with the hawala money, he said.

The parcel is then reimported and traded several times. Once the money enters the system, it could be brought back into the country and deployed in the markets in the form of overseas investments, sub-accounts or portfolio investments, the ED official said.

“The 2% duty has had a serious impact on the hawala trading of diamonds, since the margin the diamond traders earn for facilitating the transaction and providing a (fake) paper trail is only 1%," said the ED official, who expects hawala bankers to find a different conduit.

To combat this, Indian diamond traders had sought the imposition of a presumptive tax, based on turnover, not profit, coupled with the elimination of 3% import duty, GJEPC’s Ray said.

The duty was eliminated in 2007, Ray said, but the industry balked at a 6-8% presumptive tax, which it saw as too high. (Israel has a presumptive tax of around 1-2%.) The result, he said, was a surge in circular trading.

Rather than reverting to the 3% import duty, the government instead imposed the 2% import duty on polished diamonds, Golan said.

“If traders can still generate credit, and if the return on the money is more than 2%, then I expect some traders would find it worthwhile" (to continue round tripping), said Golan of IDEX.

The new import duty will have limited negative impact on the Indian diamond industry, said Ray of GJEPC, since, for the most part, the industry is driven largely by rough diamond imports on which there is still no tax.

Ray said the true impact of the import duty will be apparent only after two or three months, but that GJEPC may lobby for more reforms. Depending on the outcome of the import duty “experiment", the council may call for an exemption for 10% of exports to be kept in duty-free stores, to serve as samples for buyers and exempted from import duties should they be returned to India.