One of the most important policy decisions of Narendra Modi’s government was to replace the Planning Commission with the National Institution for Transforming India (Niti) Aayog. The body is mandated to be “designing strategic and long term policies and programmes for the Government of India" and also provide “relevant technical advice to the Centre and States".

In a recent meeting of its governing council attended by the Prime Minister and 28 chief ministers of the country, Arvind Panagariya, Niti Aayog’s vice-chairman and a professor of economics at Columbia University, made a presentation outlining the think tank’s vision, which seems to raise more questions than it answers.

According to the presentation, India’s per capita income is expected to increase from Rs1.06 lakh in 2015-16 to Rs3.14 lakh in 2031-32. It then goes on to claim that this will allow access to two-wheelers or cars, air-conditioning, and other white goods “for nearly all" in this “New India".

Even an undergraduate student of economics knows that unless there is perfect income equality, all persons in a country would not have incomes equivalent to per capita GDP. According to the Household Survey on India’s Citizen Environment & Consumer Economy (ICE 360° survey) conducted last year by the independent not-for-profit organization, People Research on India’s Consumer Economy, it was only the top quintile (or top 20%) which reported having incomes close to the GDP per capita levels at Rs95,694. The per capita income among the poorest quintile (or bottom 20%) was as low as Rs14,850. Even if one believes that there is under-reporting, and adjusts for it by inflating the reported income figures, the per capita incomes of the bottom four quintiles (or the bottom 80%) remains below the aggregate per capita mark.

The inequality in asset ownership is even starker in the country. Even among the top 10%, not all households owned a car or two-wheeler, the survey of 61,000 households showed. It is only among the top percentile (or top 1%) that nearly all households owned either a car or a two-wheeler. Evidence from other sources corroborate such findings. According to the India Human Development Survey conducted by the National Council of Applied Economic Research (NCAER) in 2011-12, less than 3% of Indians owned five household assets typically associated with being “middle-class": TV, motor vehicle, computer/laptop, cooler or AC, and refrigerator. 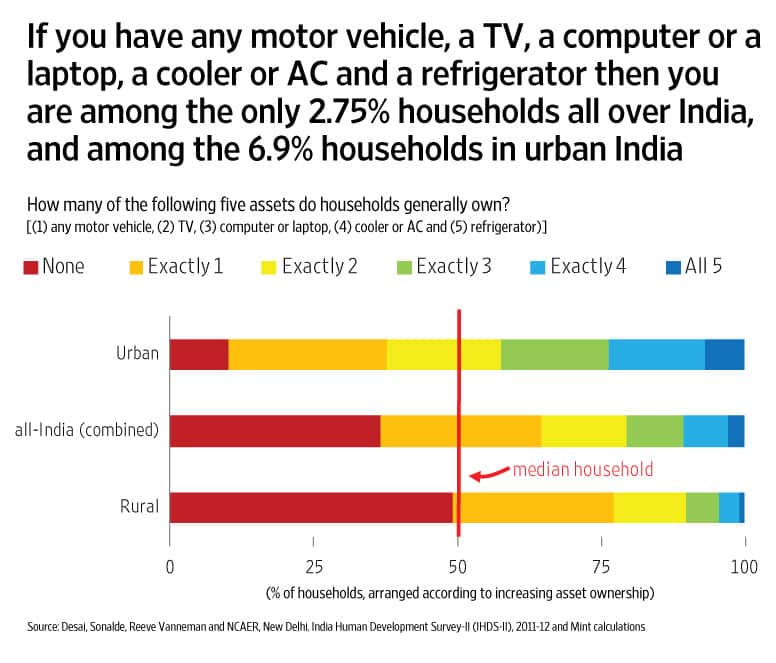 This means that access to such assets requires incomes which are significantly higher than India’s current per capita income levels. Unless the Niti Aayog is advocating a radical income redistribution program, “nearly all" Indian households won’t have access to such white goods even by 2031-32.

As the first chart shows, those in the second income quintile (bottom 20-40% of income distribution) enjoy a per capita income which is just 22% of the GDP per capita figure for India in 2015-16. For this income class to enjoy per capita income of Rs3.14 lakh in 2031—which might be what is needed to own white goods such as motor vehicles and coolers/AC—India’s per capita income would have to rise to Rs14.27 lakh by then.

This entails nearly a 14-fold jump in per capita incomes in almost as many years (or an 18% annual pace of per capita GDP growth), a feat which no country on earth has achieved throughout human history. Even during their most rapid phase of growth between 1965 and 1990, the so-called “miracle economies" of Asia such as South Korea and Taiwan did not experience per capita GDP growth beyond 6%.

Niti Aayog’s focus on growth is welcome but it would be better to hear from them how they propose to achieve higher growth rates rather than hear them weave fantasies of a “New India". For instance, if India needs to catapult itself to a sustainable high-growth trajectory, it should find a way to revive the sluggish investment cycle. India is nowhere close to reaching investment levels which China had during its high-growth phase.

The Niti Aayog has had its share of problems with several chief ministers questioning its style of functioning and relevance. If the Niti Aayog has decided to ignore such concerns and make outlandish claims in the name of a vision document, it should be ready for barbs from economists as well.