New Delhi: India has warned nations against attaching strict conditions and targets to the aid given to Afghanistan because it is grappling with the threat of terrorism, a menace it is ill-equipped to fight without support from the international community. 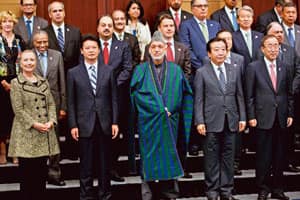 “While we assist Afghanistan in attaining its long-cherished goal of self reliance, we must also acknowledge that despite our successes in Afghanistan, the basic, ideological, infrastructural, logistical and financial infrastructure of terror is still intact in the region," foreign minister S.M. Krishna told representatives of about 80 countries and international aid organizations, including the World Bank and the Asian Development Bank, gathered to discuss aid for Afghanistan beyond 2014—the date by when most of the US-led international troops will leave Afghanistan.

The one-day meet is aimed at ensuring the sustainable development of Afghanistan during the so-called transformation decade of 2015-2024.

“Afghanistan continues to be a country that faces an existential threat from terrorism emanating from beyond its borders—a threat that it is fighting every day, and that it is ill-equipped to repel in the absence of substantial assistance from the international community," Krishna said. “It is this perspective that should animate our thinking when we commit to Afghanistan’s long-term future today. This perspective should not only determine the quantum of resources that we commit to Afghanistan, it should also temper the kind of conditionalities that are attached to assistance."

India’s comments represent support for Afghan President Hamid Karzai and his administration, who have been battling charges of graft and poor governance that have been reportedly stymying the effects of international aid from percolating down and weaning away ordinary Afghans from the insurgency there.

International financial backing is critical for security in the strategically located country, given that most of the US-led international troops are to leave in 2014. But donor fatigue coupled with weariness over the decade-old war in Afghanistan—among the poorest and most corrupt nations in the world—have taken their toll on global community.

“Afghanistan’s security cannot only be measured by the absence of war. It has to be measured by whether people have jobs and economic opportunity, whether they believe their government is serving their needs, whether political reconciliation proceeds and succeeds," US secretary of state Hillary Clinton said in her speech.

“That must include fighting corruption, improving governance, strengthening the rule of law, increasing access to economic opportunity for all Afghans, especially for women," she later said.

According to a report on the BBC website, Karzai pledged to “fight corruption with strong resolve". He said that despite the progress made in the past 10 years, Afghanistan’s economy remained vulnerable and security a major obstacle.

“It will take many years of hard work on our part as Afghans, as well as continued, empowering support from our international partners before Afghanistan can achieve prosperity and self-reliance," he said.

International donors provided $35 billion in aid to Afghanistan between 2001 and 2010, according to a summary prepared by Japanese officials. The Afghan central bank has estimated that at least $6 billion a year in new investment from foreign donors will be needed to foster economic growth over the next decade.

Krishna said the aid pledges “represent a baseline or minimum requirement for a least developed, land-locked country that has experienced externally-imposed conflicts for three decades... and continues to face an existential threat of suicide terrorism from across its borders. These amounts give a fighting chance for success if they can be optimized and managed in a frugal way without excessive administrative costs. Indigenization of aid management while upholding best practices should be one of our aims in the transformation decade."

India has pledged $2 billion for reconstruction and development of Afghanistan since 2001, Krishna said, adding the government “does not visualize its partnership with Afghanistan as conditions-based, or transitory; nor are we looking to transition out of this partnership".

Underlining India’s commitment to standing by Afghanistan, Krishna said India was not planning to “limit its future development engagement in Afghanistan to a particular time frame or only to projects in the pipeline".

Referring to an investment conference New Delhi hosted to attract the private sector into Afghanistan on 28 June, Krishna said the recommendations made at the event included the facilitation of two-way transit and transport agreements, infrastructure connecting Afghanistan to major ports and markets in the region and an international fund for developing small and medium enterprises in Afghanistan.

India considers Afghanistan part of its extended neighbourhood and is keen to see a government in Kabul that is not inimical to its interests. India’s rival, Pakistan, on the other hand, has been trying to ensure that the Kabul administration remains within its sphere of interest so that it can fall back on Afghanistan in case of a war with India.

India and the US agree that Pakistan has been supporting the rebel Taliban insurgents in Kabul with this aim in mind.

Reuters and AFP contributed to this report.