Mumbai: Homes in the so-called affordable segment across India are finding buyers but most are investors, not people who plan to stay in them because these are located too far away from offices and have little support infrastructure, analysts and trade experts said.

That they say is defeating attempts by the government to increase the accessibility of housing through tax breaks and other incentives, the benefits of which are therefore going towards those more interested in turning a profit. 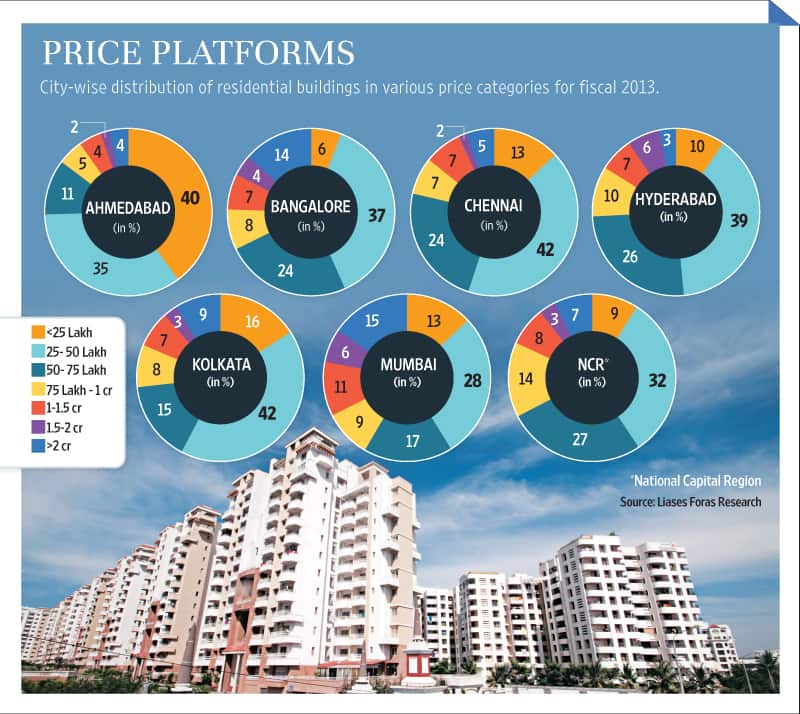 “Most new launches in the last three quarters are in the affordable category," said Pankaj Kapoor, managing director of Liases Foras.

He attributed the rise in sales in part to government regulations that have been favourable to both developers and buyers in the relatively more affordable segment.

In December, the Reserve Bank of India allowed developers and housing finance companies to raise up to $1 billion (around ₹ 5,500 crore ) through external commercial borrowings (ECBs) to promote housing projects in the category, sometimes referred to as low-cost because they are cheaper than more upscale properties.

The 2013 budget proposed a ₹ 2.5 lakh deduction on the total taxable income on home loans of less than ₹ 25 lakh, applicable to loans from banks and non-banking financial companies (NBFCs).

Such housing is a profitable business for developers. In Mumbai, they offer an internal rate of return (IRR) of 45% and gross margin of 24%, according to a report by consulting firm Monitor Deloitte in 2010.

Most of these apartments are being bought by investors rather than genuine low-income buyers despite the lower prices and interest rates, since these houses are being built in far-flung places with poor connectivity and social infrastructure, analysts and real estate consultants said.

For instance, a person who buys such a home in Karjat, one of the last stops on Mumbai’s suburban Central line in Mumbai, will have to travel about 85km if her office is in the central business district of Nariman Point. That’s about two hours by train each way.

To be sure, investors are also taking a gamble for the same reasons of connectivity and support infrastructure.

“Most projects are not affordable in terms of living and these projects are bought by investors who park their money. If it is a wrong product, their investment gets stuck," said Om Ahuja, chief executive, residential services, at real estate consultant Jones Lang LaSalle India.

Meanwhile, developers are promoting affordable housing in a big way.

Value and Budget Housing Corp. (VBHC) has several affordable housing projects— one each in Mumbai, Delhi, Chennai and two in Bangalore.

It’s planning to launch one more in Mumbai and Delhi in the next few weeks, according to Vivin Mathew, chief executive, western region.

Over the last two years, Poddar Developers said it has sold more than 2,500 apartments in Badlapur in Thane district and Karjat in Raigad district, in the range of ₹ 3.5-12 lakh each. It recently launched a similar project at Atgaon in Thane and is planning 40,000 sq. ft of land by the end of this financial year.

“Around 30% of our home buyers are availing this loan facility and we are mostly getting the end users," said Yogesh Bosmiya, director, Rashmi Housing.

The company said it has sold 3,000 units in the Mira-Bhayander area of Thane district since 1999 and is developing another 4,000 units in the same area. Bosmiya said the profit margin is 20-25%.

Some developers are also building hospitals and schools, or improving existing public schools, to create social infrastructure in a bid to attract families.

That strategy may not necessarily bear fruit, say analysts.

“Creating social infrastructure is directly related to density and it will not happen by building schools," said Kapoor of Liases Foras.