Innovation and investment to lead shift towards green energy

Innovation and investment to lead shift towards green energy

The government and the industry must work in tandem if India has to grow in a sustainable manner, panellists said at a Mint conclave on sustainable industries, held in Bangalore on Tuesday. While the industry must ensure quicker investment in greener forms of power, such as wind and solar power, the government should put in place a policy framework that ensures solar photovoltaic cells and solar thermal cells become the norm than the exception. 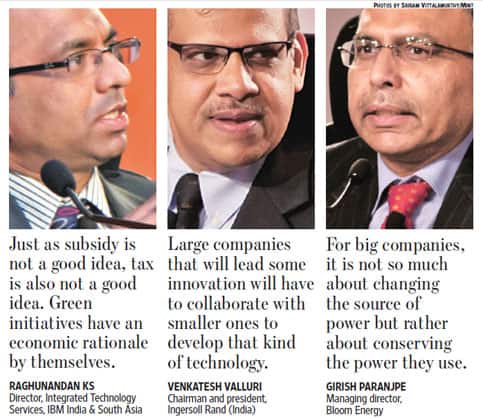 The ‘Global Trends in Renewable Energy Investment’ annual report says this year that there has been a 32% increase in green energy investments, and for the first time developing countries have invested more in green energy than developed ones. You can invest in green technologies for about two years, and then recover it over a period of time. But what about companies that don’t have that kind of deep pockets. Will they be able to invest in expensive technology and still stay in the black any time soon?

Valluri: I take it back to the ’90s where shareholder value maximization at any cost was the primary aim. You had to deliver profitability quarter after quarter. There is a tipping point that’s come in the industry that shareholder value is important, but the question of whether you are a responsible company is important too. Responsibility leads to sustainability. Investments are needed. Companies that don’t make the investments will probably not survive in the future. While they deploy responsible technologies, they’ve to deliver shareholder value. Large companies that will lead some innovation will have to collaborate with smaller ones to develop that kind of technology.

Valluri: Over many decades in this century, we did not define any technology as irresponsible. It’s unfair to describe so, as we did not know anything beyond that. Now we realize that some of these technologies are not creating environmentally sustainable programmes. Now, we want to start bringing technologies like wind and nuclear. It’s a transition that has to be quicker, where investments need to come in. That’s what the industry has to grapple with, how to bring in these investments quick.

The argument goes that the Western civilization has been polluting for years, and now when the time has come to conserve, they developed CDM (clean development mechanism) markets and so on, expecting developing countries such as India to go green first. Is a similar cycle going to be played out within India too? Are the wealthier ones going to deploy expensive technology in India first, or are we all going to go green together—bottom up?

Paranjpe: The advantage of new technology in renewable energy is that it doesn’t have to be top-down. It can be bottom-up too. This has created a wave of innovations in technology and business. For example, the husk power generation in Bihar is a business innovation. For big companies, it is not so much about changing the source of power but rather about conserving the power they use. It is different for each section. If you reduce air conditioning in your office by one degree, maybe it reduces power consumption by 10-12%.

India started on solar power early. Research institutions started developing this technology in the ’80s. But it is gaining momentum only now. Is it because of the subsidies? Unless and until there are subsidies, is more green growth possible?

Saxena: It is not just a matter of subsidies. There’s always a right time for the introduction of any technology. Solar was talked about much earlier. But we had to wait for the technology to transform into a viable business proposition. We are at that stage now. This is not just for solar, there are a number of such technologies that can be developed to form a green portfolio. The only sustainable path to staying in black is, in fact, to go green.

I recently read that IBM (International Business Machines) has a smart-grid project in a tie-up with the bureau of energy efficiency. Is it that now the time is right and so we must invest in a certain kind of technology?

Raghunandan: IBM smart-grid is part of the IBM smarter planet project. For sustainable cities, it’ll encompass multiple technologies starting from water management, power optimization, to having sustainable use of technology. There are stages to adoption. The first stage is compliance to certain government norms. The second is social consciousness, a citizen phase. The third is the innovation phase, where you look at not just doing the right things but also look for financial opportunities—a business development opportunity in helping other companies and the society to become greener, while also making our own business greener.

India has always been considered a conservative country, while the West has been a consumptive culture, probably because they had far more natural resources. Now, do we need to become more conservative than we inherently are? Are we just pushing conservation as a marketing package with sustainablity now? 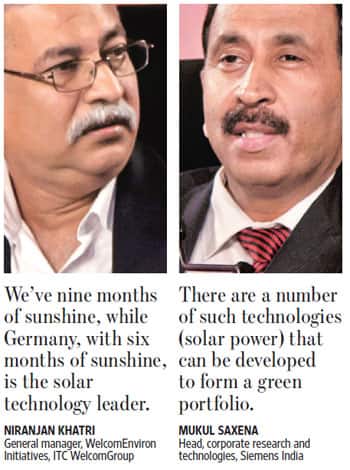 Now that we have the national solar mission in place and there are active subsidies, is that all that is needed now? Are we on the right track?

Khatri: I’m wary of subsidies. To my mind, you and I don’t need subsidies. Anyway in our own homes, we have genset, water filter, etc. We are capable of buying those products. The state governments should put the onus on citizens on generating similar solutions for energy shortage; then citizens will use solar photovoltaic and solar thermal (energy), if the government provides needed subsidies and incentives. The capital burden is then shifted on to the citizen. The government does not have the money to do it on a large scale. There’s at least a 40-50% deficit. The policy framework has to be made more innovative so that these low-hanging fruits like solar, PV (photovoltaic) and thermal will be there in every house. The saved energy can be then used for industry.

Is there a lot of low-hanging fruit in renewable energy space waiting to be plucked in India, or are there several tall trees to climb?

Valluri: The execution piece in the country is a huge challenge. We ought not have subsidies for everything. This country gives a ₹ 120,000 crore subsidy to agriculture—Rs 80,000 crore for fertilizers and the rest for seeds and other things. We also have 30% of our food being wasted. If the farmer needs to win, his crops should not be wasted. Instead of giving subsidies, the government can build infrastructure to save food. But that’s not happening because of political pressure. Anyone who wants to use a new technology will use it only if it is beneficial financially. Each company will be good in some technology or the other. We need to build a platform and integrate these. But, usually, we take up only one technology at a time and try to make it a success in isolation. We need technology convergence while we retain IP (intellectual property). Then, the question of subsidies and government policy takes a back seat. We don’t need to dig up forests and resources, there’s enough available to innovatively use today.

Khatri: If you bring about leapfrogging change, we need transformative change, for which we need architectural change. It’s time for state governments also to look at current policies and assess their impact on sustainability. For example, we probably need to make a matrix in this country to see which industry’s waste can be used for which other industry. For example, in Rajasthan, Hindustan Zinc Ltd has about 20,000 tonnes of waste, which was finally picked up by Shree Cement Ltd. That freed up 40ha of land. We can do the same for landfill sites. The government should first aim that, say, by 2017 there’ll be no landfills. Then, we can analyse what’s thrown into landfills and how they can be utilized. If we take Delhi, nearly 45% of the waste there is wet garbage, 40% is inert construction debris. It’s an individual and national waste. Opportunity to convert this into wealth: Wet garbage is a source of biogas or it can be composted. Inert debris can be converted into low-cost construction material. Waste is wealth at the wrong place.

Is it just a matter of scaling up? Do we have all the nuts and bolts in place?

Paranjpe: There are one or two such sectors, like waste to biogas. Problem here is that garbage is not segregated. It’s just a habit that people can be educated to change. The way cities organize themselves should change. They should become more autonomous, like in China, Europe and the US. City governments have to be powerful and plan for themselves in energy planning, water, waste, etc. Here we have the decisions taken at the state or the federal level, disconnected from the ground.

So, do we need more legislation?

Paranjpe: The unit of governance has to shift much more to the city, like China has demonstrated. They say that they’ll have 1,000 cities with 10 million each and that’s how they’ll take care of a billion people. We don’t have a plan like that. The most people estimate is that India will have 15 cities. Ultimately, there’ll be urbanization, and we’ll have to plan for energy and water anyway.

Do we need more government?

Saxena: We can wait for the government to lay out all the policies for us and expect us to toe the line. We can also look at a different approach: how do we approach the problems that we have at hand, where to get solutions, how to address them at the grass-roots level. Waste to wealth is a good idea. How many organizations with the financial power to do that are doing that? We should take the bull by the horn and invest in some of these basic technologies.

Mr Raghunandan, do you think we need a carbon tax? The government can use those tax funds to plan more programmes?

Raghunandan: Just as subsidy is not a good idea, tax is also not a good idea. Green initiatives have an economic rationale by themselves. We can start small, by adapting some simple initiatives with economic benefits. Starting with using mugs instead of paper cups, channelling the heat produced in data centres to house warming, like in Canada. We just have to use what’s available. Even for fossil fuels, I read that only one-third of the energy is extracted and gas is used for that. The same article says that we could use solar thermal to extract and extract more. There’s economic rationale at every step, starting small at consumer or corporate level. Then the government can make them big projects.

Mr Khatri, do you think it would be a good idea for all companies to set targets for themselves, as accepted by a regulatory body? If the company does not do it, it has to pay a fine.

Khatri: Let’s take water. In 1947, we had water at 30ft depth. In Bangalore, it’s gone down to 1,000ft now. But, if we ask people if they’ve done water harvesting, most of them have not in their ₹ 1-2 crore houses. As corporates also get water easily, they’ve not thought up innovative solutions for water usage optimization. Payback in this area is hardly 6-12 months as investment required is very low. Water and energy are like Siamese twins. If you waste water, you are wasting energy. Especially for SMEs (small and medium-scale enterprises), just by cleaning up the glass, switching off the lights and closing the leaking tap, we can save up to 60% energy. In our country, we have limited water, but archaic systems are flushing litres of water out.