Bangalore: Sitting on a shelf at the library of the National Law School of India University, or NLSIU, a glass-walled structure straight out of Ayn Rand’s The Fountainhead, is a book titled the Young People’s Book of Law.

It reads: “So, there is, and must be for each generation, much to read, much to learn and much to put into practice. But it is all such interesting work and understanding of the principles of law and seeing how they apply in the modern world that is one of the most rewarding studies. Those who decide to take it up seldom, if ever, regret it."

More than two decades ago, Indian students would find these words dull and unconvincing. But NLSIU’s path-breaking efforts have helped redefine the need for legal education in India, making the legal profession a lucrative and attractive career option.

“When I joined in 1993, no one had even heard of the NLSIU. Law was an option for those not interested in studies or for those who wanted to pass up a few years or those whose parents were lawyers. The competitive exam conducted by the school was fair and honest and would take in a limited number of the best students in the country. This changed the notion of what a law school was," says Menaka Guruswamy, who graduated in 1997.

Last month, around 12,000 Indian students aspiring to be lawyers appeared for the first Common Law Admission Test, or CLAT. The test is the result of an effort initiated by the Bar Council of India, a regulatory body that prescribes standards in legal practice and education, and the University Grants Commission, a government agency that provides funds to institutions of higher education to cut down the multiplicity of law school entrance exams in the country.

The CLAT at present applies to admissions in 10 law schools in the country. Students are given an option to rate the schools according to their preference. As per the rank obtained by the students seats are allotted as per their preferences.

The admission process of the first CLAT exam held this year showed that more than 7,500 students chose NLSIU as their first preference.

Not surprising, considering the high salaries offered by international and national law firms, besides multinational corporations, to NLSIU students and the school’s competent faculty and exceptional infrastructure facilities; it is believed to have the best law library in the country. The government of Karnataka set up NLSIU in 1988 as a response to the neglect of legal education in India. This negligence could have been a heavy price to pay in the wake of economic liberalization and new regulatory schemes.

NLSIU’s first batch graduated in 1993, coinciding with the early years of liberalization of India’s economy. Around that time, a need for corporate lawyers arose to fulfil demands of private players and foreign investors who were forging new deals and awaiting reforms that would end the “licence raj" and open doors for trade and commerce at an accelerated pace.

Moreover, the success of the school’s progressive curriculum and the opportunities it created for young law students through job placements and extra-curricular activities encouraged policymakers in other states in India to follow suit and begin paying more attention to legal education and feed the demand for young law graduates in multinational and corporate entities, besides traditional legal practice in courts.

“NLSIU brought in a new dimension to education in India. Our five-year BA LLB programme made students take legal education seriously. Before our students were recruited, corporates and multinational corporations thought law students were unemployable," says vice-chancellor A. Jayagovind. He believes the high standards set by the NLSIU have provided an impetus to the improvement of legal education in India with states setting up law schools modeled on NLSIU and law colleges attached to state universities too emulating the NLSIU curriculum in an effort to improve.

“Chandrababu Naidu, former chief minister of Andhra Pradesh, supported setting up a similar law school in Hyderabad with an aim to make it the best in the country, " he explains talking about Nalsar University of Law in Hyderabad. 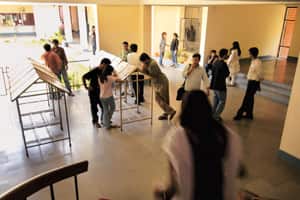 Since 1993, the school has produced students who have excelled in India and abroad while working with law firms — corporate law and litigation in courts, international organizations, non-profit groups and in civil services.

A board outside the vice-chancellor’s office displays the names of alumni who were awarded for their excellence. Vikram Raghavan, gold medallist of the batch of 1997, now works as legal counsel for the World Bank dispensing legal and transactional advice on a variety of constitutional operational, and local law issues that arise in World Bank-financed projects in West Asia, north Africa and South Asia. Nandan Nelivigi, Raghavan’s senior by four years and a graduate of the first NLSIU batch, is now partner at American law firm White and Case Llp.’s New York office and advises on cross-border transactions in India.

Sitting on a stone bench in the 23-acre NLSIU abound with gulmohar and eucalyptus trees, fifth-year student and president of NLSIU’s student body Visakh Abraham is sending frenzied text messages to his friends who are sprucing up their campus for “University Night" — an annual event before summer vacation begins where all the student committees that are involved in extra-curricular activities give out prizes and souvenirs.

A few metres away, students huddle around a notice board covered with flyers with information on membership procedures for different student committees for the coming academic year 2008-2009, from sports to moot court competitions. One committee conducts legal literacy programmes in rural areas and partners with local non–profits. There’s also “Legala", an annual inter-collegiate competition that culminates in “Strawberry Fields", a popular rock concert.

Third-year student Srinivasan Gowrishankar says, “Life in NLS is hectic and stressful but you learn how to have fun. We develop a great deal here by learning from our peers."

His classmate Vrinda Maheshwari agrees: “I don’t know how the trimesters pass by. There are so many activities during the year. But of course, you have to learn to prioritize and balance academic and extra curricular activities."

Maheshwari, who will graduate in two years, believes she will not get into legal practice of any sort but wants to pursue further studies in liberal arts and then teach.

Until a few years ago, NLSIU received criticism from the legal fraternity since the majority of the students took up plum offers by corporate law firms and multinational corporations; very few offered their services in spheres such as litigation practice in courts, legal education and social work.

In the last decade, more law schools like National Academy of Legal Studies and Research, or Nalsar, University of Law in Hyderabad and National University of Juridical Sciences, or NUJS, in Kolkata burgeoned to fulfill the rising demand for legal services in developing areas such as intellectual property laws, taxation and mercantile laws.

Second-year student Tasneem Deo, who got a seat in NLSIU after her second attempt and also spent a year at Symbiosis Institute of Law in Pune says: “There’s really not so much a law college can give you than what you take away from it."

The recruitment drive at NLSIU in the last two years has seen top law firms in the UK, such as Clifford Chance Llp., Linklaters and Allen and Overy Llp., whisking away top students in anticipation of the opening up of the legal services sector in India with attractive pay packages. The end of 2007 saw law firms in India hiking their salaries by 30-50% to stop the loss of fresh talent.

Abraham, all set to graduate in July, is looking forward to practising at the Amarchand and Mangaldas and Suresh A. Shroff and Co.’s Bangalore office this year. He has been offered Rs12 lakh per annum. “Our students are in demand. Students I teach earn over 50 times what I earn," says Parvathi Menon, assistant professor of law, poverty and development at NLSIU.

“Lawyers have a role to play in the development of a maturing economy like India. Talking not as an immediate graduate from law school but from a holistic level we can help in setting up a fine regulatory system by adopting practices of other countries that help facilitate deals across the world and attract foreign investors," Abraham says.

Interestingly, the private sector and foreign firms are not only hiring from NLSIU but also funding endowment chairs to sponsor legal experts who conduct classes for students in specialized and developing areas of law. For instance, financial services giant ICICI Ltd holds a chair on business laws and Reliance Industries Ltd holds a chair on corporate governance. Leading UK firm Allen and Overy Llp. in January set up a chair on international financial law, the first of its kind in the history of legal education in India. Allen and Overy also recruits from NLSIU for its London offices.

Back at his vice-chancellor’s office, the phone lines are busy with calls from prospective students anxious to find out how the admissions after the CLAT results will roll out.

As NLSIU celebrates its 20th anniversary celebrations this year, it is poised to witness many changes in the academic year 2008-09. Old professors are due to retire and there will be a change of guard in the administration with Jayagovind and Registrar V. Vijayakumar completing their five- year tenures.

“Though new additions to our new girls’ hostel are washing machines and a table tennis table these are only little steps," says Maheswari, who dreams of a better canteen and hostel facilities like those of Nalsar in Hyderabad.

“We still don’t match the best law schools in Singapore and Malaysia in terms of infrastructure, though our students are on par with international students," Jayagovind says. “No one should be complacent about (the institution’s) success."