New Delhi: India’s external economic profile improved significantly as short-term debt to total external debt ratio fell to 17.8% in 2014-15, the lowest in eight years, which could provide confidence to the central bank and the government in a volatile external financial situation. In 2013-14, the ratio stood at 20.5%.

Rise in short-term debt is usually considered riskier as it needs to be repaid from foreign currency reserves in a shorter duration of time.

However, the external debt-to-gross domestic product (GDP) ratio rose marginally to 23.8% at end-March from 23.6% a year earlier as external debt during the year rose 6.6% to $29.5 billion due to higher commercial borrowings and non-resident Indian deposits.

“The increase in the magnitude of external debt was partly offset by the valuation gains resulting from the appreciation of the US dollar vis-a-vis Indian rupee and other major currencies," the Reserve Bank of India (RBI) said in a statement. 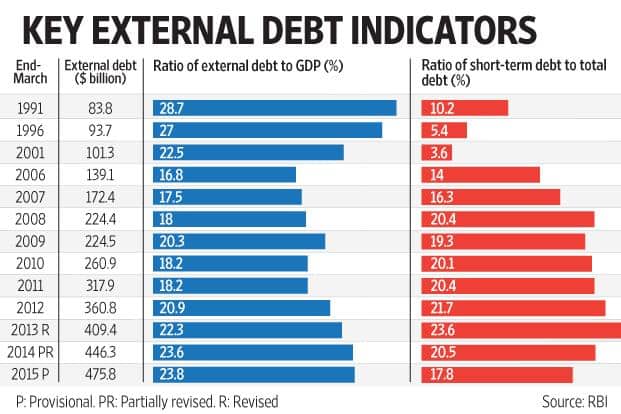 Data on short-term debt includes trade credit up to one year, foreign institutional investor (FII) investment in government treasury bills and corporate securities, investments by foreign central banks and international institutions in treasury bills and external debt liabilities of foreign central banks and commercial banks. At the end of March, India’s short-term debt fell 7.6% to $84.7 billion over the same period a year ago.

Crisil Ltd chief economist D.K. Joshi said it is encouraging that short-term debt to total external debt and the government’s external debt are falling, but increase in commercial borrowings could pose trouble for the companies that have unhedged exposure.

External commercial borrowings rose to $181.9 billion in 2014-15 from $149.5 billion a year ago. External debt on the government account during the period fell to $58.5 billion from $62.2 billion in the previous year.

Aditi Nayar, senior economist at Icra Ltd, said the accretion of external debt moderated in 2014-15 from the previous year and was outpaced by the increase in foreign exchange reserves, resulting in a welcome improvement in the coverage provided by reserves.

“If external developments lead to a prolonged bout of risk aversion, refinancing pressures may re-emerge for a portion of the debt that is set to mature during 2015-16. However, the substantial level of foreign exchange reserves limits the vulnerability on a macroeconomic level," she added.

According to RBI’s latest data, India’s foreign exchange reserves stood at an all-time high of $355 billion.

Data separately released by the Controller General of Accounts showed the government keeping its deficits under check. The fiscal deficit in the first two months (April-May) of the fiscal year 2015-16 stood at 37.5% compared with 45.3% during the same period last year.

Revenue deficit, the difference between government’s revenue and expenditure, was 43.8% of the budgeted ₹ 3.9 trillion against 54.2% during the same period last year.

With the focus on infrastructure building, capital expenditure got a boost with the government spending 13.6% of the budgeted amount against 11.4% spent during the same period a year ago.

The fiscal deficit, the government’s gross borrowings, for the entire current fiscal year has been pegged at ₹ 5.55 trillion. Net tax revenue stood at ₹ 19,889 crore, or 2.2% of the estimate, while non-tax revenue was ₹ 32,472 crore, or 14.6% during the period.