New Delhi: India, at this moment, is free of polio.

A day after the World Health Organization (WHO) announced that India no longer belonged to the list of polio-endemic countries, congratulations continued to pour in as stakeholders gathered at the World Polio Summit, being held in New Delhi, raised a toast to India’s success.

According to World Health Organization (WHO) norms, India has to retain this state of affairs for two more years before it can join the list of polio-free nations. 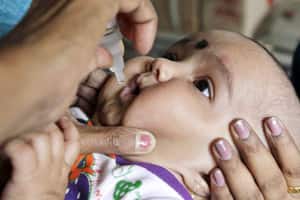 A health worker administers polio drops to an infant at a polio center in Mumbai. AP

In 1985, India reported 150,000 cases, and as recently as 2009, the government was struggling to control the outbreak with 741 cases, more than any other country in the world. The success announced on Sunday is sweeter because of the dramatic turnaround and public health experts now say the dream of a global eradication is achievable.

“I was a disbeliever. I always thought India would be the last country to eradicate polio because of the sheer size of the population. What India has done has set a gold standard for polio-endemic countries. If every country follows the model set by the Indian government, we will soon achieve global eradication of the virus," said William Boyd, chairman of the Rotary Foundation, which partnered with the Indian government in the polio campaign, along with WHO, Gates Foundation and UNICEF.

The challenge of providing universal immunization was compounded by high birth rates, a large birth cohort of 26 million children every year, migrant communities, lack of sanitation, huge disparities among and within states, and most of all, resistance to oral polio vaccine in high-risk populations.

Despite the enormity of the challenge, the central reason for the remarkable success of India’s polio campaign is that the government reviewed its strategy as it went along, giving tailor-made solutions to unique problems in each state.

The purple pinky—an indelible ink to mark each immunized child—came along with incentives like toys, stationary and balloons, drawing in the target population. Additionally, the government roped in clerics, who then endorsed the campaign, convincing minority communities in Uttar Pradesh and Bihar of the benefits of immunization. When faced with the challenge of migratory population, impromptu vaccination booths were set up at railways stations, bus stops and highways.

“The government showed unflinching political commitment and emphasized on innovation in implementation of the campaign. We had to rope in religious leaders and opinion makers when we faced resistance from communities. Similarly, transit and migrant strategies were adopted to enhance coverage," health minister Ghulam Nabi Azad said at the summit. 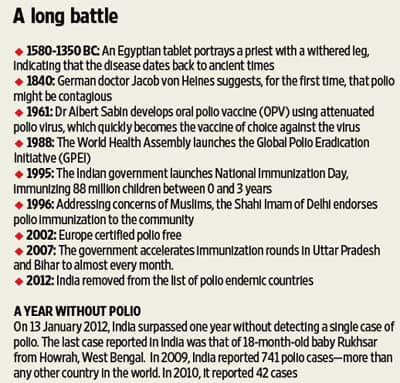 While India’s last case was reported on 13 January 2011, it will have to wait two more years before it can join the club of polio-free nations. During which time, the immunization campaign will have to sustain highly sensitive surveillance and prepare an effective emergency response, should there be a resurgence.

“I would like to emphasize that strengthening routine immunization is an imperative if we wish to sustain our gains in polio and guard ourselves against international importations," said Azad.

Keeping that in mind, the Indian government has declared 2012 as the year of intensification of routine immunization with a special focus on 207 districts recording low immunization coverage.

The fight to eradicate polio has not been easy. From addressing the insecurities of minority groups, innovative strategies to the sheer scale of vaccination campaigns, the government is being lauded for its political commitment. The government is now hoping that success in one area will lead to success in other health campaigns.

“We have a lot to learn from this campaign. This success is a boost for our health workers and we are hoping that, if the same commitment is applied to other health campaigns like measles vaccination we will be on our way to achieve the millennium development goals," said health secretary P.K. Pradhan.

As the polio virus continues to spread in Nigeria, Afghanistan and Pakistan, India stands a high risk of importing it. Azad has offered India’s assistance towards the goal of global eradication of the wild polio virus.

The country’s long battle against polio has been won, but the war is far from over. One child at a time, the government has achieved the remarkable and must now continue the effort if we are to maintain our status of a polio free nation.