Baran, Rajasthan: The consequences of careless, uncaring governance in Jaipur and Delhi-both ruled by the Congress-are proving deadly to India’s poorest tribals and providing a warning to the dangers inherent in India’s upcoming multi-billion dollar social-security scheme.

At a time when the Congress-led United Progressive Alliance (UPA) is finalizing a food security Act that will cost India more than ₹ 1 trillion and party general secretary Rahul Gandhi champions the tribal cause, Hindustan Times found how the Central and state governments, each blaming the other, have either not spent or diverted to the bureaucracy ₹ 72 crore meant to stop chronic malnutrition and hunger deaths among Rajasthan’s 90,000 Sahariya tribals.

The ₹ 72 crore constitutes the Sahariya Welfare Fund for the 11th Plan period, 2007-2012. It didn’t stop seven Sahariya children dying of hunger-related causes in 2009 and thousands living with hunger today.

Hindustan Times’ investigations reveal how over the years the funds were either not released by the Union government or not used in time by the state government. When some of the money was indeed used, the state diverted portions of it to construct homes or on other official needs.

A study in 2010 by Doosra Dashak, a voluntary organization, in Brahmpura village—one of five Sahariya villages, about 300 km southwest of Jaipur—found 42.59% of the children of 1-5 years malnourished; 25.93% severely malnourished and 1.85% suffering severe, acute malnourishment, with little hope for survival.

The core of the Sahariya aid programmes—running “ma-baari" (mother-child) centres that run pre-schools children from the tribe, and stocking primary health centres with medicines and nutritional supplements, among other things—are aimed at addressing the widespread undernourishment crippling the community. 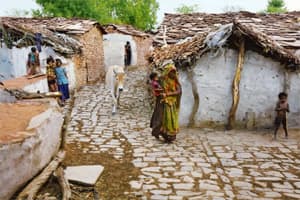 Sahariyas in a village in the Baran district .Photos: HT

So far, the state has furnished utilization certificates for only ₹ 11 crore, said Prabhudayal Meena, joint secretary in the Union ministry of tribal affairs.

When the Rajasthan government actually used the money, here’s what happened:

The Centre gave no money to Rajasthan in 2009-10 because the state provided no proof of money spent, official documents show.

In the year to 31 March 2010, the state government used only one-third of the ₹ 12 crore given by the Centre under the programme. Official documents show it transferred the rest, ₹ 8 crore, to its public deposit account, where Rajasthan parks Central and state government funds that remain unused in a financial year. 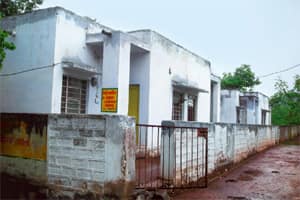 Funding issues: The residential quarters built from the Sahariya development fund at Baran.

“The blame-game between the Centre and state governments is routine and large amounts of funds are surrendered each year," said Naresh Chandra Saxena, member of the National Advisory Council, a body headed by Congress president Sonia Gandhi that provides policy and legislative inputs to the government. In 2009-10, state governments utilized ₹ 1,996.79 crore against budgetary estimates of ₹ 3,205.5 crore for tribals across India.

Another aberration is the infrastructure focus of the Sahariya welfare fund, say non-profit organizations working on tribal welfare.

In 2010-11, Rajasthan used ₹ 8 crore of the total ₹ 12 crore of Central funds for Sahariyas on buildings. In this fiscal year, it intends to spend ₹ 17 crore of the ₹ 18.79 crore received from Delhi on infrastructure, including schools and hostels.

“The administration raises huge buildings and then spends huge amounts on their upkeep," said Moti Lal, convenor of an organization called Sankalp that works for the welfare of Sahariya tribals. “It is a big farce."

Baran additional district magistrate Ram Prasad Meena lays the blame on Delhi. “The programmes are designed by the Centre," he said.

“That is incorrect," said Meena of the Union tribal affairs ministry. “Schemes are designed in consultation with the state governments, not unilaterally by the Central government."

Shortly after the Congress won Rajasthan in December 2008, the Sahariya development committee, which supervises and monitors tribal welfare schemes, was disbanded. Disagreements over nominated candidates have prevented the formation of a new committee.

“The government’s rhetoric is right but its intentions remain ambiguous," said Komal Srivastava of Bharat Gyan Vigyan Samiti, a voluntary organization that works for Sahariya welfare.

Baran district magistrate Navin Jain admits “gaps in implementation" of the welfare scheme but claims progress. “It is a tremendous achievement," he said, “that the Sahariyas have now stopped dying from hunger."

The report is the first in a two-part series on malnutrition in Rajasthan.

Tomorrow: Among the Sahariyas, India collapses. (The “Tracking Hunger" series is a nationwide effort to track, investigate and report India’s struggle against hunger and malnutrition. This special report on malnutrition is the result of a fellowship jointly awarded by Save The Children and Mint. To know more about Save The Children:www.savethechildren.in)