New Delhi: India and China on Thursday discussed a series of confidence-building measures, including the institutionalization of a dialogue on maritime issues to bridge the trust deficit between the Asian neighbours. 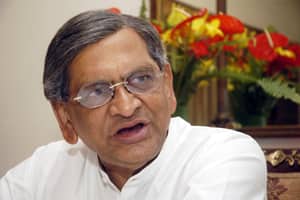 “The Chinese foreign minister said China will be willing to (provide) landing rights for Zee TV in China," Akbaruddin said.

India raised the issue of balancing bilateral trade, which has been booming but skewed in favour of China. In 2010, both sides set a target of $100 billion in bilateral trade by 2015. India-China trade has crossed $73 billion so far in 2011-12, according to media reports. But India is worried about a yawning deficit that crossed $20 billion in 2010-11 in China’s favour.

Parallel to the ministers’ meeting, Indian and Chinese officials held their fifth round of talks on counter terrorism cooperation. Officials from India who are part of a panel to ensure greater coordination between the two countries on their border dispute will be travelling to China next week for their first round of talks, Akbaruddin said. India and China are also looking at institutionalizing a dialogue on maritime issues. The suggestion for such a dialogue came from China, said Gautam Bambawale, joint secretary (China), at the external affairs ministry, adding the idea would need further discussion. This follows a Chinese warship confronting an Indian Navy vessel in late July in the South China Sea. In another incident in 2009, an Indian Kilo class submarine and Chinese warships reportedly engaged in rounds of manoeuvring while on their way to the Gulf of Aden.