The numbers behind climate change

On Monday, leaders of more than 180 nations will meet in Paris to start discussions on a legally binding and universal agreement on climate. The thrust of the talks will be on reducing emissions of greenhouse gases to limit the rise in global temperature by the end of this century to 2 degrees celsius above pre-industrial levels.

The talks cannot come sooner. The current set of commitments to reduce greenhouse gas emissions run out in 2020. Whatever countries have outlined so far in their intended nationally determined contributions (INDC) documents—essentially pledges to reduce emissions—don’t seem enough to curb the rise in temperatures. In the first of a two-part series, we highlight the key numbers on climate change. According to the World Meteorological Organisation, 2015 is likely to be the warmest year on record. January to October data shows the average surface temperature so far is around 0.73 degree Celsius above the 1961-1990 average of 14 degrees Celsius and approximately 1 degree Celsius above the pre-industrial 1880-1899 period. Research has shown that many other impacts of climate change just get more and more intense with rising global temperature. For example, extreme heat waves, flooding, rainfall events, but also drought and water scarcity, are all expected to become more frequent in many regions and countries, including India. 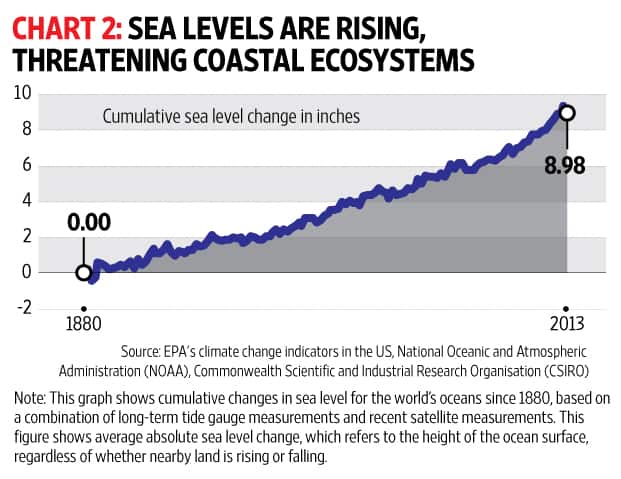 The warming has set off melting of polar ice caps, resulting in a rise in sea levels that threatens to drown coastal areas and islands. Sea surface temperatures have also been rising, accelerating sea level rise. Coastal flooding and submergence of entire island nations is the most immediate impact of sea level rise. Scientists estimate that with rising sea levels, small island countries such as the Maldives, will not survive.

Kiribati, a Pacific Island nation state, has become famous for buying land in nearby countries as it prepares to resettle its population amidst the threat of submergence. It also threatens marine life, especially corals, as well as making shellfish (a source of essential protein for more than a billion people across the world) cultivation more difficult. 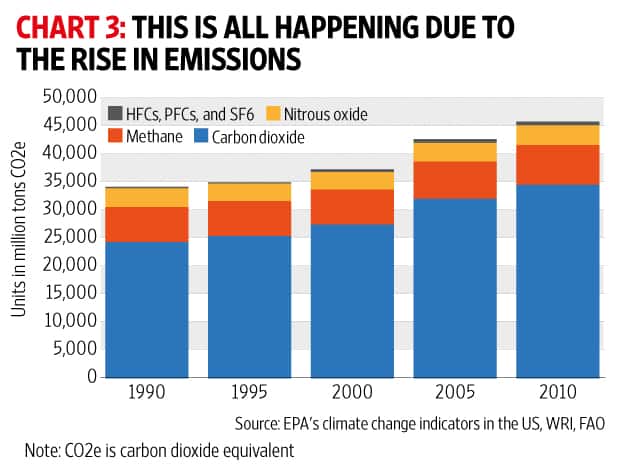 There is consensus among scientists about the dangers of climate change from anthropogenic (owing to human activity) emissions. Greenhouse gases have a heat-trapping effect on the earth’s atmosphere. Industrialization, driven by rising fossil fuel consumption, has seen carbon dioxide emissions soar. Deforestation to clear land for cultivation and settlement has removed the world’s carbon sinks. Modern lifestyles are energy intensive, and fossil fuel consumption is only set to rise as population grows. According to a UN climate panel report, to curb global warming at 2 degrees Celsius, the world can only emit a total of between 800 billion and 880 billion tonnes of carbon. Of this, about 530 billion tonnes had already been emitted by 2011. Rising temperatures and sea levels have set off a chain of extreme weather events and environmental changes that are making the world a more risky and dangerous place. According to Aon Benfield, a reinsurance company, 2014 was the 12th costliest year for global weather catastrophes since 1950. In fact, seven out of the 10 costliest years have occurred since 2000.

Data shows that since the 1980s, the incidence of extreme weather events has accelerated manifold, be it floods, droughts or storms. India too is feeling the heat of global warning. According to Jacob Schewe, a researcher with the Potsdam Institute of Climate Change Research, this summer’s devastating heat wave and the weakening of average monsoon rainfall along with more frequent rainfall extremes can be seen as harbingers of India’s future climate. 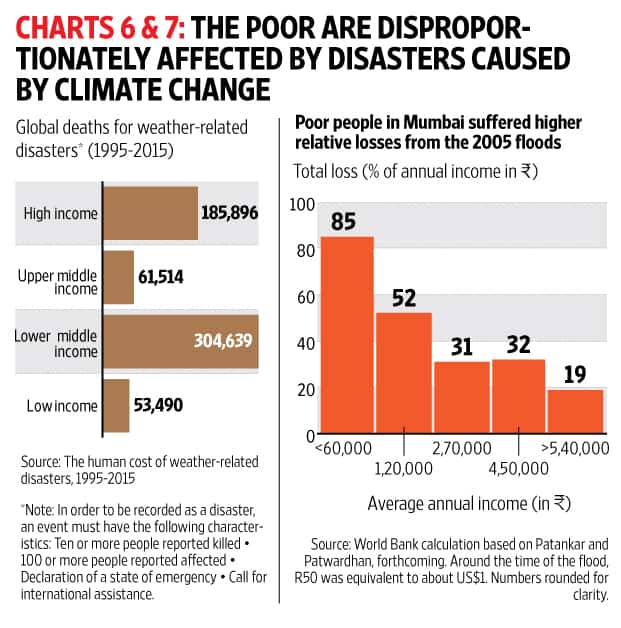 It’s hard to adequately quantify the adverse effects of climate change, but the most acute effects include food stress. The agriculture sector is particularly vulnerable to extreme weather events. Modelling studies suggest that climate change could result in global crop yield losses as large as 5% by 2030 and 30% by 2080. Health effects—higher incidence of malaria, diarrhoea and stunting—and the labour productivity effects of high temperatures are the next strongest drivers.

A recent World Bank report finds that in 52 countries where data was available, 85% of the population live in countries where poor people are more exposed to drought than the average. To give an example from closer home, poor people suffered economically the most during the Mumbai floods in 2005 and the Bangladesh floods of 1998.

Part II of the series will focus on the politics behind climate change and what major greenhouse gas emitting countries have promised so far.