Home / Politics / News /  Saving a forest from vanishing
Back
Share Via

Saving a forest from vanishing

Saving a forest from vanishing

Kathgodam : The Nandhaur forest that stretches from India’s border with Nepal in the north to Corbett National Park is one of the several hundred reserve forests in India—and that may just be the problem. Nandhaur deserves an upgrade, say conservation activists who, over the past six months, have undertaken an exercise using camera-traps placed along the Kathgodam-Tanakpur road to track wildlife in the region—they have pictures of tigers, leopards and bears, among other species to show for their efforts.

The state government doesn’t seem to be sensitive to the ecological needs.

In the last decade it has allowed the setting up of a railway sleeper factory, an Indian Oil Corp. Ltd (IOC) depot and an Indo-Tibetan Border Police (ITBP) complex on land carved out of the reserve forest.

The state government wants to broaden the road close to where the camera traps took the pictures. It remains blind to other projects, including illegal boulder mining and logging that are destroying the forest. Poaching continues unabated in the absence of adequate forest guards. Meanwhile, a Central Reserve Police Force (CRPF) camp is being built at one end of the Nandhaur forest. All this may be a precursor to further developmental activity.

Going by the pictures produced by the camera traps, it’s highly likely that the forest interior harbours much more by way of wildlife than has been captured by the road-side devices, says Dipankar Ghosh, director of species and landscape programmes at WWF (World Wide Fund for nature)-India, whose team set up the traps.

“If proper protection measures are put in place, Nandhaur can be as successful as Corbett, which has a high density of tigers and holds a large elephant population," says scientist and conservationist A.J.T. Johnsingh.

The 850 sq. km pristine forest tract east of Corbett National Park lies between the Gola and Sharda rivers on the Terai. It is part of the Terai- Bhabar region in the Shivalik range of the Himalayas and is mostly covered by sal trees and grasslands. 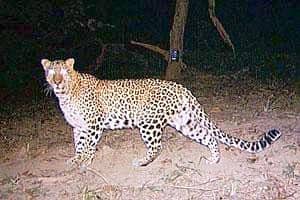 Nandhaur forms part of the larger area known to conservationists as the Terai Arc Landscape (TAL) that covers 49,500 sq. km (30,000 of which is in India, the rest in Nepal). The global biodiversity hot spot lies in an 810km arc curving from the Kalesar Wildlife Sanctuary in Haryana and the Simbalwara Wildlife Sanctuary in Himachal Pradesh to Valmiki National Park in Bihar.

Though fragmented in many places, TAL represents one of the densest populations of the tiger in the world with 14 protected areas (nine in India, five in Nepal) and is home to three flagship species—the tiger, Asian elephant and the Indian rhinoceros.

In 2004, Wildlife Institute of India said it was one of the three viable habitats key to the long-term future of the tiger, which was acknowledged by the state forest department in 2005. The area is also a part of the Shivalik Elephant Reserve declared by the Uttaranchal government in 2002. 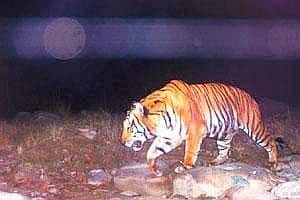 Photo of an Indian tiger taken by hidden cameras during a wildlife tracking exercise in the forest.

Rajesh Gopal, member secretary and head, National Tiger Conservation Authority (NTCA), says, “Since 2001, the authority has made a concerted effort to declare as much tiger habitat as possible so that the forest landscape gets the highest possible legal protection. It is the only way to save forests from getting diverted for development purpose."

Still, Nandhaur is outside the Protected Area (PA) network on India’s conservation map. The state’s apathy has led to large-scale destruction of the Gola river corridor and has hampered elephant movement. The corridor used to ensure that wildlife could move uninterrupted from Corbett to Nandhaur and all the way to Nepal.

TAL in Uttaranchal can be roughly divided into three areas—between the Yamuna and Ganga rivers, between the Ganga and Gola rivers and between the Gola and Sharda rivers.

This area is the only link between the eastern forests of TAL such as Bramhadev and Sukhlaphata Wildlife Reserve of Nepal and the western forests of Ramnagar and Terai central forest division, conservationists say, offering another argument for its protection.

It was the British who renamed Bamori Ghati as Kathgodam (meaning a depot of wood) in April 1884. Since then, the constant flow of timber has reached unsustainable levels. Tree theft: A truckload of wood being smuggled out of a forest in Uttaranchal.

These rights are being subverted by the so-called “wood mafia" to exploit the sal forest, conservationists allege. Instead of cutting dead trees, there is indiscriminate felling of sal trees across Uttaranchal. Sometimes, when an inquiry is conducted, permission papers for the hak hakook of random villages are liable to be produced, allowing violators to escape.