Home / Politics / Policy /  GST: One nation, one tax a work in progress

GST: One nation, one tax a work in progress

As the GST regime completes one year, India's most important tax reform has overcome initial jitters but still remains a work in progress

As the goods and services tax (GST) regime completes one year, the consensus is that India’s most important tax reform is off to a good start, barring a few niggles, which will soon be sorted out. In short, it has gone past the initial jitters, and is now a work in progress. Here are the takeaways:

One nation, one tax

GST integrated the country into a common market by removing barriers across states and enabling smooth flow of goods from one state to the other. It subsumed various indirect taxes levied by the centre and the states to bring in a pan-India uniform indirect taxation system.

However, in an effort to bringing all states on board and to minimise the inflationary impact, India brought in a dual GST with multiple tax rates for both goods and services—fewer slabs would have meant taxing items of common consumption at a higher rate.

GST, a destination-based tax, has eliminated double taxation by removing the cascading impact of taxes. Subsuming most indirect taxes such as excise duty, service tax, value-added tax, entertainment tax and octroi, it has done away with the need for businesses to pay multiple taxes. Consequently, it has brought down the paperwork significantly and infused supply chain efficiencies, especially with respect to time taken for the movement of goods.

It has also eliminated inspector raj to a significant extent, though businesses fear the introduction of the e-way bill system or the electronic generation of e-way bills could lead to harassment by tax authorities. However, the compliance burden remains onerous for small firms. 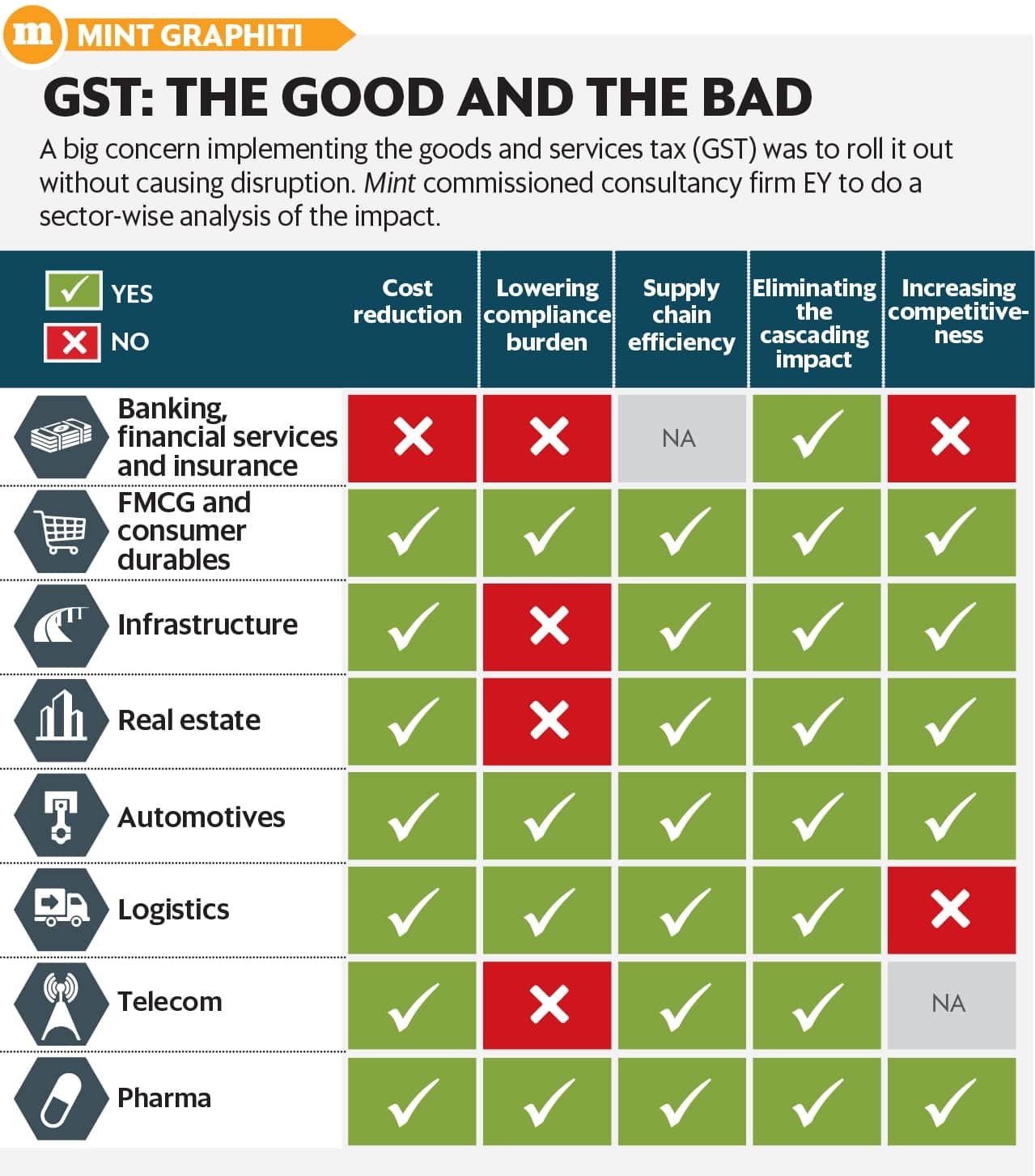 All decisions pertaining to GST are taken by the GST Council—the representative body comprising state finance ministers as well as the Union finance minister. So far, 27 council meetings have taken place, and all decisions have been taken by a consensus and the provision of voting has not been used. This, despite the fact that there are sharp differences among the states, as well as between the centre and the states, due to their different political affiliations, and the basic economic character of each state.

The entire process under GST, including registration, tax payments, return filing and refunds is technology-driven. Implementation of GST along with the rollout of the e-way bill system has ensured a seamless audit trail of all transactions in the supply chain. This has not only expanded the taxpayer base, but to a large extent, reduced under-invoicing of transactions and no-bill transactions. However, such fraudulent practices are still being widely used by tax evaders. This has contributed to revenue buoyancy. When annualized, GST revenues have grown by 11.9% with a revenue buoyancy of 1.2. The impact of GST is also visible on the direct tax side. More taxpayers are getting added to the tax base and direct tax revenues are growing at a robust pace.

The advent of matching invoices under GST from December is expected to further plug the loopholes in the tax system.

Eliminating double taxation has led to a fall in overall taxes levied. However, prices have not fallen commensurately despite the constitution of the anti-profiteering authority.

Many changes are expected under the GST as it enters its second year. Simple tax return forms, more anti-tax evasion measures such as matching of invoices to filter genuine input tax credit claims, reducing the number of items excluded from GST as well as reducing the number of tax slabs, gradually, are measures that are on the anvil.

At the same time, there is a threat of further distortion in the GST architecture as revenue pressures mount.

The second year will also see the government aggressively cracking down on tax evaders and looking to expand the tax payer base further.

Subscribe to Mint Newsletters
* Enter a valid email
* Thank you for subscribing to our newsletter.
Topics
mint-india-wire one-year-of-gst long-reads
First article
Close
Recommended For You
Feedback
Select your Category
Your Message
No Network
Server Issue
Internet Not Available