New Delhi: It has not yet reached a crescendo but across the Indian Institutes of Management (IIMs) this week, one question is finally being asked aloud: Is this really the best way?

The top business schools kicked off placements on Tuesday, starting at IIM-Bangalore. But, this year, after several years of frantic hiring and high stress levels among both recruiters and candidates, there has been admission and recognition that reform is inevitable. 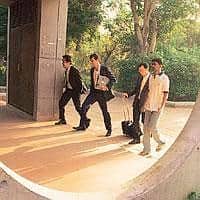 Tight schedule: A file photo of recruiters going for appointments with IIM-A students. Many say the recruitment process should be extended, giving time to recruiters to choose the right candidates and vice versa. (Photo: Madhu Kapparath/ Mint)

The IIMs in Ahmedabad, Bangalore and Kolkata each have a five-day or week-long process but, in real terms, the fight for the country’s most- sought-after business school talent is over in a day or two at every campus.

In this crucial time period, recruiters from investment banks and consulting firms, private equity companies, commercial banks and business conglomerates criss-cross the country, packing a tight schedule to make it to the three campuses scattered at almost the three ends of the country.

They will use their expertise to judge students in half-hour slots, try to lure them with big bonuses and foreign postings, lose good candidates to others, and pace the floor when competitors simply lock a candidate in their room to force a hire. “We understand that the recruitment process is competitive. We also think that the process is very stressful for the candidates themselves and a bit suboptimal for us as a recruiter," said Vinod Nair, managing partner of Diamond Management and Technology Consultants’ India practice, which hires at the top IIMs and the Indian School of Business at Hyderabad. Diamond is also among the consultants used by HT Media Ltd, the publisher of Mint.

Nair calls the process stressful and unfair for candidates as they are forced to make on-the-spot decisions about jobs and careers, often “under pressure, without having time to think about the decision or getting others opinions".

For recruiters, it is also less than desirable as they often do not get to spend enough time with the candidates or sometimes even meet the candidates who are on their list.

The IIMs, it seems, agree with Nair, but say changes in the placement process won’t be immediate. They say a packed placement process essentially has evolved to suit a market that is hungry for talented business leaders.

Students, who manage the placements and have been taught in class to weigh their words as future CEOs, say change is desirable but not feasible. “I agree that in the long term the process needs to evolve. Maybe a rolling one that stretched over January and February. That’s the way forward," said Rohan Mathur, who is part of the 18-member student placement body at IIM, Ahmedabad, in an annual ritual to take charge of the complex placement process.

IIMs say the placement process has evolved with feedback from companies. “Companies are very comfortable with the fact that when they leave campus at the end of the day, they have a fixed number of confirmed candidates, which they don’t have in a US B-school. Over there, they have to chase students for six months," said Sourav Mukherji, teacher in charge of placements at IIM-B.

IIM-A’s Mathur warned that a rolling process can clash with student exchange programmes. IIMs have active student exchanges in the winter months when more than a quarter of the student body is away to campuses abroad, while students from Ivy League schools such as Columbia Business School and the Wharton arrive to experience Indian business education.

“It is a very competitive process. It is the alumni and the summer’s exposure which make a difference," said Swaran Sehgal, head of human resources at Edelweiss Capital Ltd, referring to summer jobs and the strategy of sending alumni to hire candidates.