Home >Politics >In Chennai, sex reform over a glass of beer

In Chennai, sex reform over a glass of beer

In Chennai, sex reform over a glass of beer

Chennai: For the past two years, Mano, a slightly built 24-year-old soft-drink salesman, has had a task in hand while swigging beer at a dingy bar in Tamil Nadu’s capital. He is one of the 1,700 people recruited and trained by the Chennai-based Y.R. Gaitonde Centre for AIDS Research and Education (YRG CARE) over the past decade to inform fellow drinkers about moderate drinking and wearing a condom during sex. 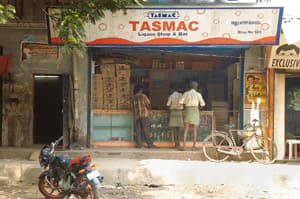 Periodic biological tests on a small group have shown that this exercise has successfully reduced the incidence of sexually transmitted diseases in the sample population.

Measures to control HIV in India include educating truck drivers or sex workers in safe sexual practices. But this global study of the US government’s National Institutes of Health, or NIH, targeted places or hot spots such as market areas in China and bars in India where sexual networks converge and negotiate.

At least three evenings a week, Mano (the nickname used for him in the study), the youngest of three children of an auto rickshaw driver, has beer at a central Chennai bar. After a drink, he loosens up to chat with his friends on condoms and moderate drinking. Sometimes, he pins a question mark cut out of paper on his shirt pocket as an icebreaker.

“Soon, strangers having a drink ask me why I am wearing a question-mark badge," Mano, who also takes these conversations to the neighbouring cricket ground on Sundays, says in Tamil. “That’s when I start the story and tell them, ‘Earlier, I would be okay doing it with an aunty (sex worker) without the helmet (condom), but not any more after I learnt about HIV through this class.’"

Mano received a Rs500 gift voucher and a certificate from YRG CARE after attending a five-day training programme for the NIH study that concluded in 2007. The sessions teach opinion leaders to counter excuses such as “Oh, but we all are going to die one day," or “Sex is not enjoyable with a condom."

“During the sessions, we don’t tell our trainees how they should conduct their sexual life but merely say that if they are engaging in sex with multiple partners, then they should do it in a way that is safe," says A.K. Srikrishnan, research manager of YRG CARE. “We are taking no moralistic stance."

The idea to target bars was to induce behavioural change in high-risk men who are likely to shun lessons on condom usage from a sex worker or by their wives, according to NIH.

Starting 2000, this study of 500 bars in Chennai also tested voluntary blood and urine samples of 1,200 male customers and 480 female sex workers in their vicinity every two years till 2006. According to an early analysis of the study that is to be published before the end of this year, the incidence of transmission has dropped, reflecting increased condom usage along with moderate drinking practices.

“We are currently investigating the impact of improving the ambience of a wine shop," says Srikrishnan. “Small measures such as improved lighting can also motivate people to drink moderately and consequently indulge in safe sex."