The National Biotechnology Regulatory Authority (NBRA), an independent entity to regulate a spectrum of biotechnology activities including vaccines, seeds and biological products, which require genetic engineering, requires parliamentary approval to come into being.

A draft of the enabling Bill was put up on the website of the department of biotechnology (DBT) in May for public comments, but officials say it is unlikely to be taken up in Parliament’s winter session beginning on Thursday.

Currently, the Bill is with the law ministry, which is yet to approve it. Before the draft Bill is tabled in Parliament, it also requires clearance from the Union cabinet. 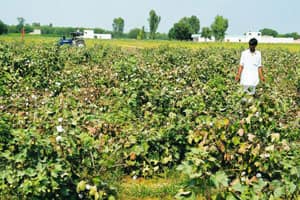 GM controversy: A file photo of a cotton field in Haryana. Bt cotton, which contains a gene sourced from a soil bacterium, is the only commercially available genetically modified product in the country. Rajkumar/Mint

“There was confusion with the health ministry over whether some functions of NBRA will clash with its proposed Central Drug Regulatory Authority," said one of the three officials, who is with DBT. It is one of the main reasons why the Bill has been delayed, he said.

Bt cotton, which contains a gene sourced from a soil bacterium, is the only commercially available genetically modified (GM) product in the country. Several other GM plants such as brinjal, tomato, potato and rice are in advanced laboratory trials and are awaiting clearance.

However, environment minister Jairam Ramesh said on 16 October that he would allow Bt brinjal on farms only after more detailed discussions.

Some experts said the lack of an authority contributes to making the approval process for GM crops opaque. “GEAC cleared Bt brinjal. Then the minister suggests more consultations. That implies he doesn’t trust his own ministry’s recommendations," said C. Kameshwar Rao of the Foundation of Biotechnology Awareness, a Hyderabad-based non-profit organization. “So unless an independent authority comes soon, such confusion and mistrust of GM will continue."

DBT has drafted the NBRA Bill. DBT secretary Maharaj Kishen Bhan is on an official visit to the US and was unreachable on his mobile phone.

An official with the law ministry said that some portions of the Bill were too “open-ended" and could lead to future conflict with the existing Environment Protection Act, 1986. “These have to be closed, and that will take some time." He, too, didn’t want to be identified as he is not authorized to speak to the media.

The NBRA proposal has had a controversial history. Environment groups have protested such an authority on a variety of grounds, the most notable being that it wrests control from state governments over clearances to genetically modified crops.

“We have state-level mechanisms that ensure what kind of seed is available to the farmer. This piece of legislation overrules that," said P.V. Satheesh of the Deccan Development Society.

The organization has been strongly against the introduction of GM food. “It compromises biodiversity as well as farmers ability to choose their seed," added Satheesh.