Home >Politics >Policy >Congress down in Mizoram, but is still in with a chance

Congress down in Mizoram, but is still in with a chance

Mizos' wariness about the BJP forming a government here could give the Congress, in power since 2008, an edge

Nausel/Aizawl (Mizoram): Ngaihliani, 40, has nothing to say when asked which political party should come to power in Mizoram after the 28 November assembly polls. Ask what she would like the next government to do for her and the answer is “a good road" to connect her village to state capital Aizawl, about 22km away.

No surprise given that the existing road that connects Nausel to Aizawl isn’t metalled, is riddled with pot holes and easier to walk than travel by car. Then there are times when the road, hewn out of a steep hillside, sees landslides, closing the path for days.

Ordinarily, the Bharatiya Janata Party’s (BJP’s) emphasis in the state on development, connectivity and jobs should have resonated more with voters such as Ngaihliani. But in remote Mizoram, sandwiched between Bangladesh and Myanmar, things are a little more complicated. Being a predominantly Christian state, people seem wary of the BJP’s so-called “religious agenda."

“We want development but not at the cost of our culture," says Daniel Vanlalfakawma, a 29-year-old Ph.D student from Aizawl. When asked to explain “culture", Vanlalfakawma puts it down to religion, food habits and music that has a distinct Western influence because of Christian missionaries from Europe and America. “We have a distinct culture here that includes a powerful Church and a big role for civil society. I would say many Mizos are uncomfortable at the idea of a BJP forming a government here," Vanlalfakawma says.

This wariness vis-a-vis the BJP could give the incumbent Congress government—in power since 2008—an edge. Chief minister Lal Thanhawla is seeking a third successive and sixth term overall in office. Ranged against the Congress are the Mizo National Front (MNF), the Zoram People’s Movement (ZPM) and the BJP. 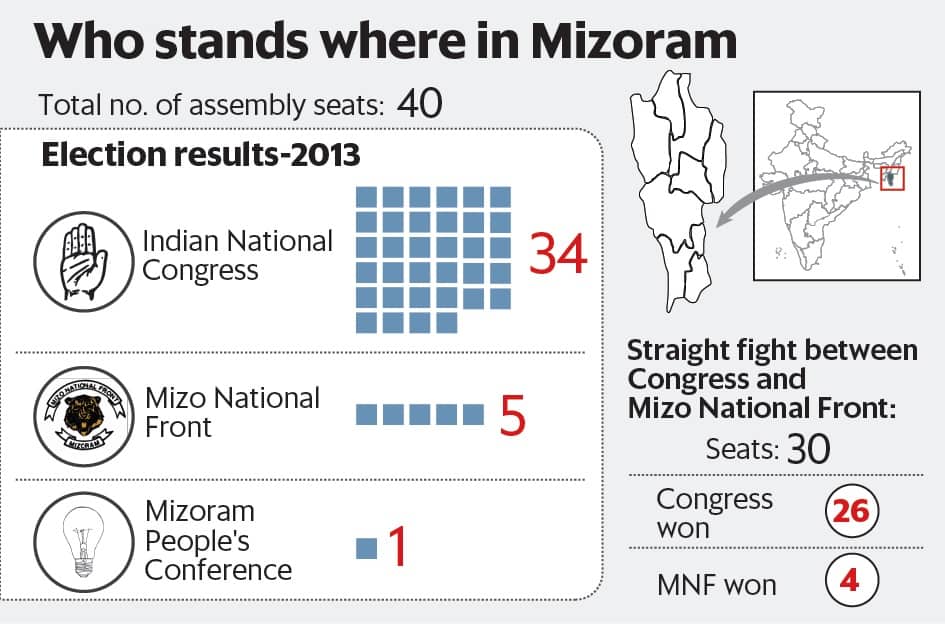 For both the Congress and the BJP, the 28 November polls are crucial. For the former, maintaining its last bastion in the North-East while for the latter to strengthen its foothold in the region. In the past three years, the Congress has seen its presence dwindle in the North-East—with governments in five states now reduced to one. For the BJP winning even 2-3 seats in a hung assembly, still means an achievement of sorts since the BJP has not won a seat in Mizoram since 1987 when the state was formed. “We will be part of the next government in the state," says Manash Deka, the BJP’s North-East zonal coordinator. He doesn’t say how but the party is expected to join hands with the MNF, that sees itself as the principal opponent of the Congress.

Asked about the misgivings of the Mizo people about BJP, Deka says the BJP is focussing on good governance, better infrastructure and jobs for the youth. If many in the state have not heard about flagship programmes of the BJP government like “Ujjwala" (giving a cooking gas connection to every village household in the country) or “Mudra" under which people from Scheduled Castes and Scheduled Tribes besides women can access loans to set up small businesses, Deka blames the Lal Thanhawla-led Congress government for it. “The Congress led government has not allowed the central schemes to work here. There is a complete blackout here," he says. Prime Minister Narendra Modi’s plans for Mizoram include developing it as a hub of regional trade between South and South-East Asia wedged as it is between Bangladesh and Myanmar.

I would prefer to have political leaders who are young and are in touch with the dynamics of the youth population in Mizoram- C Vanrempull, student from Aizawl East II Constituency

Lal Thanhawla on his part says that the BJP government’s central schemes are of no use in the state whose per capita income is higher than the national average. He is confident that the government’s flagship new land use policy—that aims to give all farmers “suitable, permanent and stable trades" besides “self sufficiency in rice, vegetables" putting an end to shifting cultivation—will ensure a win for the Congress.

On his part, MNF leader Zoramthanga, the former insurgent-turned politician, says he is confident of defeating the Congress. “In the past 10 years, there has been no development in Mizoram. The Congress lifted the ban on prohibition (imposed in 1991 and lifted in 2015) and allowed the sale of liquor. There is mismanagement of the financial situation and people are really fed up," says the two-time chief minister. He rules out an alliance with the BJP even after polls —a tactical move—say his critics given that joining hands with the BJP ahead of polls would spell political disaster considering the misgivings of the Mizo voters vis-a-vis the BJP.

If Zoramthanga believes anti-incumbency will work for his party, there are voices in the state that call for trying out a third grouping like the ZPM for example. “We have seen MNF for 10 years and the Congress for 10. I think it’s time we voted for a new formation like the ZPM," said Lalfakzuala, a 40-year-old farmer from Muthi village, 7km from Aizawl. Interestingly, these views are being expressed by first-time voters too. “It is time younger leaders who are nearer our age take the reins of the parties and governments of our state," says L. Vanlalhmangaiha, 21, a student of mathematics at the Aizawl’s Pachunga University College.