The transformation of the Indian countryside has been slow and messy

One of the celebrated success stories of India’s growth experience over the past decade was the rapid transformation of the countryside, with a massive shift in the rural labour market away from farm jobs.

Two labour economists have now challenged the empirical foundations of that success story, raising deep questions on the nature and scale of that transformation. Their research also raises questions on the ability of India’s official statistical machinery to capture the evolution of an economy in transition.

The story of India’s rural transformation was based largely on the official data on employment released by the National Sample Survey Office (NSSO). The last employment survey conducted by the NSSO showed that between 2004-05 and 2011-12, a huge section of India’s workforce, 33.3 million to be precise, left farm jobs to take up non-farm occupations, primarily in the construction sector.

The NSSO data was greeted with cheer by most economists and economic commentators, as it signalled a dramatic shift away from the farm sector, with the proportion of workers dependent on agriculture falling below the 50% mark for the first time since India’s independence. One of the most influential theories in development economics, the Lewis model (so-called after the name of its originator, the Nobel-winning economist, Arthur Lewis), relates to such a shift from the farm to the non-farm sector involving a transition from low-productivity jobs to high productivity ones. Most countries across the world, including the Asian tigers, have gone through such a transformation on their development journey, with each decade lowering the proportion of people dependent on farm jobs, and raising the proportion of people engaged in industrial or formal sector jobs. The NSSO data release was thus interpreted as the beginning of precisely such a transformation in the country, and 2011-12 was seen as a Lewisian turning point in the evolution of the Indian economy.

However, when the economic tables of the Census were released, it painted a diametrically opposite picture of the labour market in rural India.

According to the Census, between 2001 and 2011, there was a net addition of 29 million workers to the country’s agricultural workforce. The ratio of such workers in the overall workforce fell only marginally by 3.7 percentage points across the entire decade to 54.6% in 2011. In stark contrast, the NSSO reported that the proportion of farm workers (those involved in agriculture and allied activities) increased by 17.4 million between 1999–2000 and 2004–5, and subsequently declined by 33.3 million between 2004–05 and 2011–12. Thus in a period roughly matching the Census rounds, the NSSO reported a net decline of nearly 16 million farm workers. Thus, according to the NSSO, the ratio of farm workers fell sharply by 12.7 percentage points over the past decade to 47.6% in 2011-12. 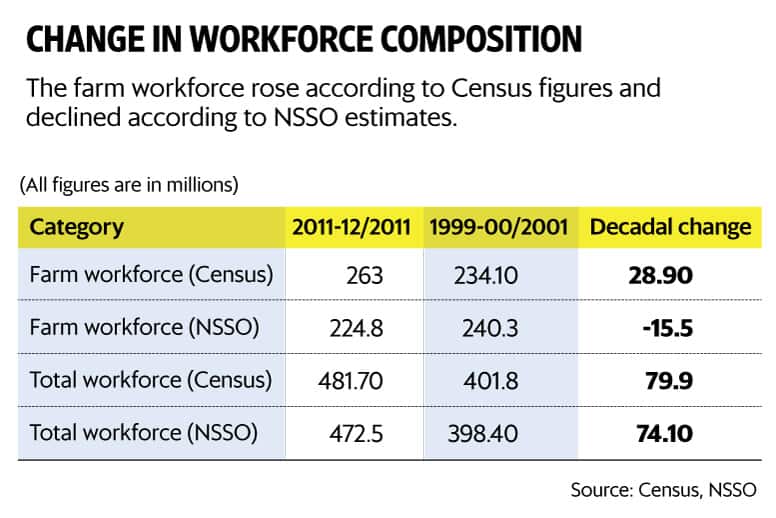 In a research paper published earlier this year in the Review of Agrarian Studies, two labour economists, Jayan Jose Thomas and M.P. Jayesh of the Indian Institute of Technology (IIT) Delhi have attempted a first-of-its-kind explanation of the divergence between the NSSO version and the Census figures, and in doing so, raise questions on the Lewisian transformation of the Indian economy.

The duo point out that the divergence between the two databases is significantly high in several states in the central, eastern, and northern parts of the country. The discrepancies are lower in case of states in southern and western India. Ranking Indian states based on growth of farm workforce over the past decade based on Census and NSSO data, the researchers find significant discrepancies between the rankings based on the Census and the NSSO in Bihar (undivided, i.e., Bihar and Jharkhand combined), Rajasthan, Odisha, Madhya Pradesh (undivided, i.e., Madhya Pradesh and Chhattisgarh combined), Haryana, Uttar Pradesh (undivided, i.e., Uttar Pradesh and Uttarakhand combined), and Himachal Pradesh. The Census recorded much faster growth of the population dependent on agriculture in some of these States (Bihar, Rajasthan, Odisha, and Madhya Pradesh). 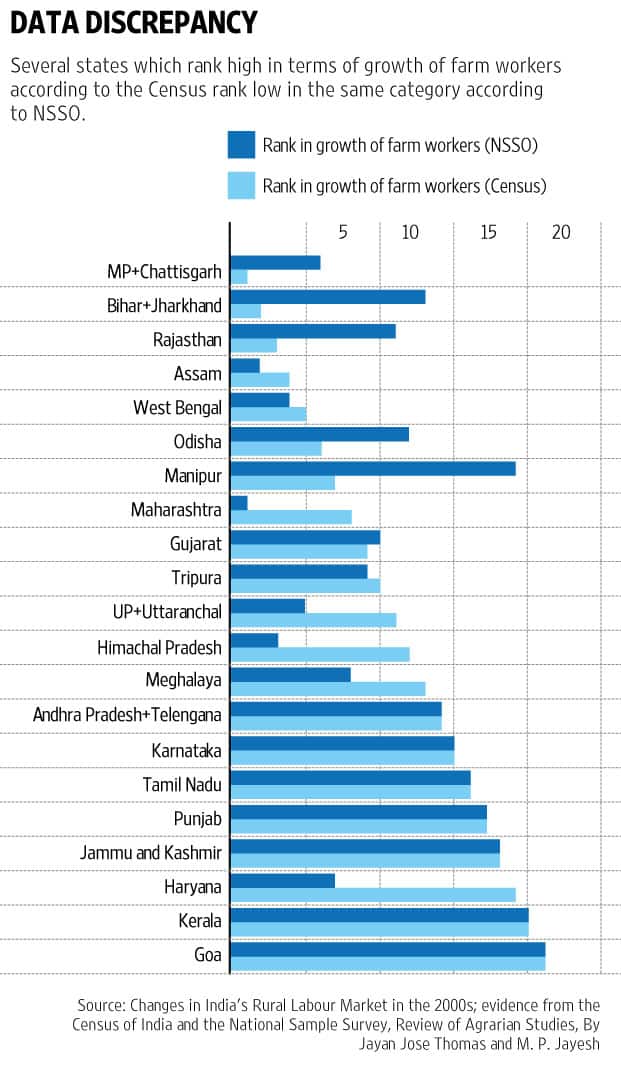 Thomas and Jayesh argue that the divergence between the two databases arises from three key reasons: definitional differences that may have led to different classification of categories of workers, the limited transformation of large parts of the countryside which meant that many workers divided their time between farm jobs and non-farm jobs, and the inability of our official statistics to take account of short-term migration.

While the NSSO’s definition of ‘principal status workers’ is more liberal than the definition of ‘main workers’ by the Census, the Census definition of ‘marginal worker’ is more liberal than the NSSO definition of ‘subsidiary workers’. ‘Principal status’ and ‘main workers’ are terms respectively used by NSSO and Census’ for regular workers engaged in one activity for a substantially long stretch of time while ‘marginal’ or ‘subsidiary status’ workers refer to short-term workers. Thus it is likely that a worker working on his farms in one season and migrating to get construction jobs for the rest of the year was classified as agricultural labourer (marginal worker) by the Census but was classified as a construction worker (usual principal and usual subsidiary status worker) by the NSSO.

The authors point to regional divergences to buttress their point that this may indeed have been the case. They point out that the states such as Bihar and Madhya Pradesh in which the discrepancies are largest are poorer and more agricultural than most other parts of the country, and have witnessed significantly higher migration over the past decade than earlier. It is likely that a short-term migrant’s occupation has been recorded differently in the two databases. The scale of discrepancy in these states in the central, northern, and eastern parts of the country suggest that despite a massive construction boom in these states, the jobs generated by the boom have been of a temporary nature and of poor quality. National accounts data seem to corroborate this hypothesis as it suggests a sharp decline in the value-added (or productivity) per worker in the construction sector. “...Even as construction’s share in total employment in India rose sharply, from 5.7% in 2004–5 to 10.6% in 2011–12, its contribution to India’s GDP hardly changed (7.7% and 7.8% respectively in these years)," write Thomas and Jayesh.

As the chart below illustrates, the differences between the two data sources are considerably reduced when one compares the rank of states based on net addition to marginal farm workers (as classified by the Census) and the rank of states based on the net addition to construction workers (as classified by the NSSO). This seems to lend support to the hypothesis that the marginal construction worker in large parts of rural India also happens to be a farm worker. 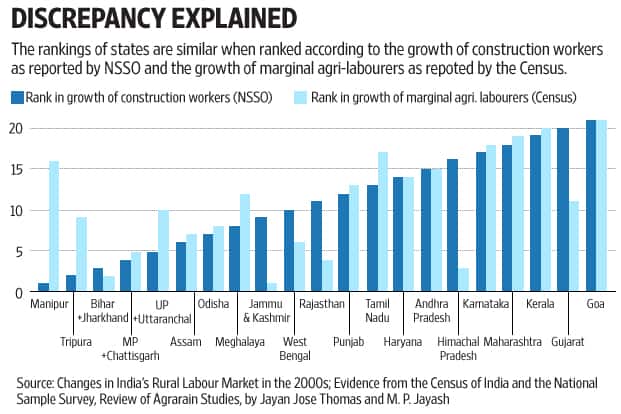 While the researchers question the narrative of Lewisian transformation of the Indian economy, they are careful not to endorse the opposing claim of unmitigated rural disaster, pointing to the recovery in rural wage rates in even the poorest states of the country. The transformation of the rural labour market has been a combination of ‘pull’ factors such as a global commodity boom and the rising demand for labour in the construction industry as well as ‘push’ factors such as the fragmentation of land-holdings and declining returns of farming. While several states in the southern and western parts of the country may be close to a Lewisian turning point, the rest of the country is yet to achieve that stage of development, the authors contend.

Thomas and Jayesh’s analysis suggests that the transformation of the Indian countryside has been slow and messy. While the rural construction boom helped absorb a large section of India’s rural workforce, the jobs offered did not offer a durable non-farm alternative to many workers. Their analysis raises questions on the limited ability of India’s statistical machinery to capture changes occurring in an economy in transition. 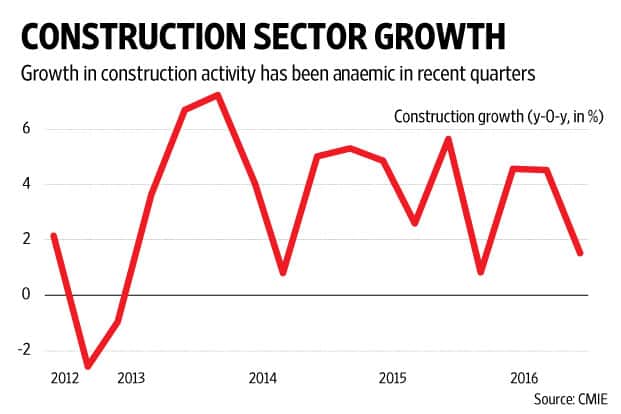 The analysis also suggests that the transformation of the countryside is not a one-way linear path. In the absence of the pull factors that contributed to the limited transformation of the past decade, it is likely that many farm workers who found non-farm jobs and were able to raise their incomes (even if temporarily) are likely to return to farm jobs. The lacklustre growth in the construction sector, as the chart above illustrates, may already have driven a large number of such workers back to their farms. If this trend continues, and there are no alternative sources of better employment, India is unlikely to witness a Lewisian transformation anytime soon.