New Delhi: It was her hunt for a recession-proof industry that took 26-year-old Dinah Manasseh to Sikkim Manipal University. A lecturer in management and commerce, she joined the Bangalore study centre of the university’s directorate of distance education in April to teach students of healthcare services management.

“The wellness training institute where I was last working was limiting its operations. That made me think of looking for a 100% recession-proof industry," says Manasseh, who had earlier worked in two hospitals as an administrator. 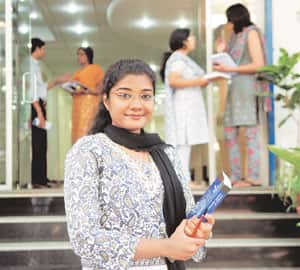 Cashing in: Sikkim Manipal University lecturer Dinah Manasseh says the wellness training institute where she was last working was limiting its operations. That made her look for an industry not hit by recession. Hemant Mishra/ Mint

A global survey conducted by staffing services firm Manpower Inc. says that in India government departments and education will see maximum hiring in the three months to September. The survey, Manpower Employment Outlook, was released on 9 June.

Jobs in education had gone abegging until the economic slowdown hit the world. Qualified candidates in happier times would opt for corporate jobs or join foreign universities to pursue a combination of research and teaching rather than becoming full-time teachers. After all, it’s always been a case of “practising the skills you have acquired rather than teaching them," says Vijay Shanker, 28, who completed his MTech in design engineering from the Indian Institute of Technology, Delhi, or IIT-D, in May.

He gives examples of his batchmates who pursued a postgraduate programme to get a “white collar job in an MNC with a chance to go abroad" rather than to take up a career in academics. “A passion for teaching combined with attractive pay packages" brought him to Lovely Professional University, or LPU, a private university based in Phagwara, Punjab, where he starts as an assistant professor of mechanical engineering this month. “A career as a professor or lecturer would be the last option for many," says Shanker.

That could now be changing.

As private professional colleges sprout and the number of deemed universities, government-recognized vocational educational centres and professional courses mounts, there is an increasing demand for teachers, laboratory assistants and administrators.

“Generally, in a recession, the education sector takes off due to focus on skills, training and unavailability of enough quality jobs," says Cherian Kuruvila, director, operations, Manpower Services India Pvt. Ltd. A definite push by government-aided organizations to hire a better workforce, given the fact that private sector hiring is low and cautious, results in a spike in hiring, he adds.

Agrees Nishant Mohanty, senior vice-president, human resources, Manipal Education Group, which has two universities offering courses including advertising, medicine and engineering: “In our organization, there is a clear focus on hiring quality faculty. Our plans are clear. We will hire more faculty even if it means having a bench strength. We have plans to build a pool of quality people." The group has increased faculty intake in engineering, medicine, various management courses and nursing, he says.

The slowdown and the reduced presence of big companies at campus placements have benefited newer institutes such as LPU in attracting IIT alumni as faculty members. At LPU, which received University Grants Commission recognition in 2006, 490 faculty members were hired this year, of which 202 are IITians.

“Though LPU has been recruiting IIT graduates since inception, a formal recruitment drive by visiting IIT campuses was initiated this year only," says Aman Mittal, assistant director, LPU. “LPU enjoys the reputation of being a generous paymaster, with pay packages (for an assistant professor) climbing to the figure of Rs6.6 lakh per annum."

Mohanty says that Manipal group has always been able to attract quality faculty, perhaps due to the competitive compensation package it offers. “While the Sixth Pay Commission salary hike has made jobs in government institutes more attractive, at Manipal, we had effected salary hikes of an average 33% in 2007."

However, K.K. Aggarwal, former vice-chancellor of Guru Gobind Singh Indraprastha University in Delhi, says it’s not so difficult to attract candidates for the first rung of posts, assistant professors (also known as lecturers) as it is at the senior positions (professors and associate professors). “The last 10-15 years were not favourable to attract the best of talent to academics, so it is not easy to fill up the vacancies at the mid-level," he says. “Only 10-15% of the people would jump from industry to mid-level positions in academia."

To be sure, this new-found love for a career in education could turn out to be a passing fancy with young employees tapping more lucrative opportunities once the economy rebounds. Siddharth Mishra, a senior lecturer in electrical engineering at LPU, admits that he has not dropped plans to join a foreign university to pursue higher studies. “I find research-oriented work more interesting as this was what I was doing during my BTech at IIT."

Agrees Aggarwal, who says the biggest player right now is the economic slowdown, which has affected the corporate sector’s paying capacity. “But yes, this is the right time to attract quality faculty, especially young, bright candidates who can be groomed to take up senior positions in the future."