Mumbai: India’s financial capital is known as the city on the move. On early Sunday morning, it seemed as if the whole of Mumbai had turned up in Azad Maidan to run the fifth edition of the Mumbai Marathon. At 6am, the field resembled a typical Indian fair with loud music, people in colourful costumes—there was a prize for the most garishly dressed person—and fast food stalls that were already open. The turnout for the race, this writer (and runner) learnt later, was around 33,000.

“If I tell my patients that I ran this race, it will inspire them to be healthy," said one of the runners, 70-year-old Premamnad Ramani, a well-known neurosurgeon. Other runners ran for other causes: from Go Green to Child Relief and You (a non-profit organization that works with children). 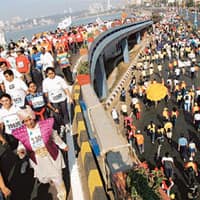 On the move: Participants run the fifth edition of the Mumbai Marathon on Sunday.

The race started off at 7:45am. The first part took runners through the well-lit Marine Drive area. At the seventh kilometre, runners encountered the climb, as it was called, or an uphill run. There were more of such to come. This writer lost count after the third and was kept going by a sign in the distance that seemed to read “Beer Peena" (drink beer). It turned out to be Heera Panna, and all there was at this stop to drink was water.

Mumbai’s citizens provided the runners with biscuits and water, supplementing efforts by the race organizers. By the 14th kilometre, most runners in the half marathon were walking and medical tents were filling up with people seeking assistance.

After that, everyone’s focus (including this writer’s) was on completing the race. So much so that this writer never found out if Veena, whose proud parents and assorted relatives positioned themselves on the route with placards exhorting her (Go Veena Go), finished the race.

A PTI report later said that Anil Ambani, the head of the Anil Dhirubhai Ambani Group and Anand Mahindra, the vice-chairman of Mahindra and Mahindra Ltd also ran the half marathon.

This reporter finished his second half marathon in 2:42:53.