Demographic explosion in the greying population

Demographic explosion in the greying population

New Delhi: The demographic dividend—referring to India’s vast working population between the ages 15 and 60—is a recurrent theme in the narrative of India’s potential to become a superpower. Only, experts now say, the country must brace itself for a social transformation as the population is greying faster than the policymakers realize. Grey area: Residents of an old-age home in the Capital gather in the dining hall for a tea break. Photo by Pradeep Gaur/Mint.

While the increase in India’s ageing population is due to better health services, there is little to cheer.

Mint’s Vidya Krishnan says India will have to brace itself for a social transformation, with the population greying faster than policy makers had envisaged.

“The challenge for India is to add value to the number of years that the geriatric population has left after retiring from jobs in the organized sector," said Mathew Cherian, chief executive, HelpAge India. “This is a great opportunity to bring in a change in mindset where society actively encourages senior citizens to pick up hobbies if not monetarily rewarding jobs."

As for the elderly poor, Cherian said there was no concept of retirement. “For them, the government needs to step in, enact laws that provide them social and financial security," he added. A resident of the home gets ready for the day. To keep up with the rapidly greying demographic profile, experts say India must urgently invent new models, essentially to keep seniors productive. Photo by Pradeep Gaur/Mint.

“Service delivery to the geriatric population is a challenge but we intend to address the policy gaps first and then look at implementation," said Sujaya Krishnan, joint secretary, health ministry.

“We have already tested pilots of the policy in 100 districts and will now expand to nearly 700 districts. We are looking at the feasibility of tying up with the National Rural Health Mission," Krishnan said.

“The policy will create a tiered, national geriatric care with focus on outpatient care, palliative, rehabilitative as well as respite care," he said.

Besides giving tax incentives to families caring for older members, the senior citizens policy calls on the ministry of personnel, public grievances and pensions to reconsider the retirement age in the context of increased longevity. 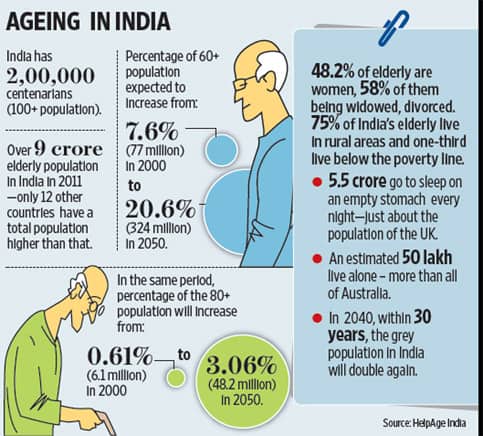 Dr A.B. Dey, an expert in geriatric medicine at the All India Institute of Medical Sciences, said care for the elderly has become less of a priority in public health.

“Old patients compete with younger ones for hospital beds and most doctors give the beds to younger patients as they have a better chance of survival. We need to reorientate ourselves quickly as this issue requires attention from all quarters," said Dey.