London: Pakistani cricketers Salman Butt and Mohammad Asif were found guilty on Tuesday of taking bribes to fix part of a Test match against England in a case that prosecutors said revealed rampant corruption at the heart of international cricket. 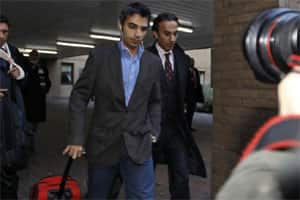 The men will be sentenced on Wednesday with Butt and Asif facing up to seven years in jail or large fines. The three players have already been banned from playing by the International Cricket Council for a minimum of five years. The “spot fixing" plot was orchestrated by Butt and sports agent Mazhar Majeed, London’s Southwark Crown Court was told.

During the three-week trial, the jury heard how an undercover reporter recorded Majeed, 36, boasting of how he could arrange for Pakistan players to rig games for money and how huge sums could be made for gambling syndicates.

Majeed said he had been carrying out match-fixing for two-and-a-half years, had seven players from Pakistan’s national side working for him, and had made “masses and masses of money".

He told Mazher Mahmood, an undercover journalist with the now defunct News of the World newspaper, that it would cost between £50,000 pounds and £80,000 pounds to fix “brackets", a set period of a match on which punters bet.

Rigging the outcome of a Test match would cost £1 million, Majeed told him. He was secretly filmed accepting £150,000 in cash from the journalist as part of an arrangement to rig games.

Majeed promised the reporter that Asif and Amir would deliver three no-balls at specific points during the Lord’s Test. The no-balls were bowled as promised, with the probability of someone predicting this by chance estimated by a cricket statistician as 1.5 million to one.

Butt and Asif denied any involvement in the plot but were convicted of conspiracy to cheat and conspiracy to accept corrupt payments, the Press Association reported.

Amir admitted the same charges in September but his guilty plea could not be revealed until the end of the trial of his teammates.

Butt, appointed Pakistan’s captain during last year’s tour of England, told the court the agent asked him to rig parts of crunch games at the 2010 Twenty20 World Cup and last summer’s test series, but he had ignored the requests. He admitted he did not fulfil his duty to inform the cricketing authorities about the corrupt approach.

The guilty verdicts came on the day Butt’s wife gave birth to their second son in Lahore.

“This is a case of cheating, pure and simple," said detective chief Supt. Matthew Horne after the verdict.

“The defendants have let down the cricketing world, their fans and the hard working people that buy tickets to watch," he told reporters.