New Delhi: A parliamentary panel will examine Samajwadi Party leader Amar Singh’s allegation that a group of top officials in the oil and power ministries are promoting the interests of Mukesh Ambani-led Reliance Industries Ltd, or RIL, in a lawsuit over gas supply from the company’s KG basin find. 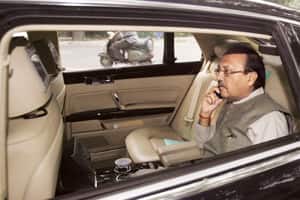 Taking a stand: Amar Singh has demanded an inquiry against some NTPC officials for allegedly colluding with RIL in scuttling the public sector unit’s case against Mukesh Ambani on a gas supply agreement. Photo: Vijay Verma / PTI

The case is between RIL and state-owned utility NTPC Ltd and is related to a separate case between RIL and Reliance Natural Resources Ltd, or RNRL, a company promoted by Mukesh Ambani’s estranged younger brother Anil Ambani.

Amar Singh is considered close to Anil Ambani. His party’s support is crucial for the ruling United Progressive Alliance government to remain in power.

“Amar Singh has written a letter to the committee that a section of both the ministries of petroleum and natural gas, and power are trying to scuttle NTPC’s case," said a member of the parliamentary committee on public undertakings, or Copu, who didn’t wish to be named as the issue is controversial. “We will look into the matter once the committee meets," the member said.

Last week, Singh, whose party helped UPA, win a crucial 22 July confidence vote, had demanded an inquiry against some NTPC officials for allegedly colluding with RIL in scuttling the public sector unit’s case against Mukesh Ambani’s firm for not supplying gas.

“I am glad these questions are being raised," said a senior Union minister who declined being named. The two cases are linked and a victory for NTPC could significantly strengthen RNRL’s position in its own case against RIL.

A senior NTPC executive, meanwhile, contested Singh’s charges against its officials: “We have pursued the case for a long time and it has been adjourned (in the court) 61 times. We are happy that this issue has reached Copu, which we expect will take a corrective measure," he said, requesting anonymity.

“Why were these objections of inaction not raised by Amar Singh earlier?" he asked, adding that the counsel for the petroleum ministry had embarrassed all parties involved in the case.

On 21 August, the counsel T.S. Doabia had intervened in the dispute between RIL and RNRL in Bombay high court, and said NTPC didn’t have a “concluded" deal with RIL.

His statement has weakened the position of NTPC, which is fighting a separate lawsuit with RIL, involving the supply of 12 million standard cubic metres of gas per day, or mscmd for 17 years at $2.34 a million British thermal unit, or mBtu. The case between RIL and RNRL is expected to come up for hearing on 1 September.

Differences have already emerged within the government on the issue, with the power ministry blaming the petroleum ministry for weakening NTPC’s case.

The petroleum ministry, on its part, has denied the accusation that it is promoting the interests of RIL as reported by Mint on 25 August.

NTPC’s lawyer has written to his counterpart in the petroleum ministry that statements Doabia made in the high court were “factually incorrect and contrary to the stand" taken by NTPC till now.

Interestingly, the petroleum ministry has, on its part, instructed Doabia to withdraw his statement because it was not part of the brief given to him. Amar Singh could not be reached for comment and a message left for him remained unanswered. Spokespersons for RIL and Reliance-Anil Dhirubhai Ambani Group declined comment.

NTPC, whose lawsuit against RIL dates back to December 2005, has always said it has a “concluded" contract with Reliance on the gas from the latter’s field in the Krishna-Godavari basin off India’s eastern coast. The gas was meant for two NTPC plants in Gujarat, which have now been delayed.

RNRL’s litigation against RIL dates back to November 2006 and the former has claimed it has rights, courtesy an agreement signed when the Reliance group’s assets were split between the estranged Ambani brothers, to 28mscmd of gas from the latter’s Krishna-Godavari basin fields, and an additional 12mscmd if Reliance’s agreement with NTPC breaks down, both at the same price at which Reliance had agreed to supply gas to the state-owned power generator, that is, $2.34 per mBtu.

Reliance wants to supply the initial 40mscmd of gas from the fields to buyers other than NTPC and RNRL.

Singh had earlier demanded the imposition of a windfall profit tax of up to 50% on refiners such as RIL and withdrawal of export-oriented unit status accorded to RIL’s Jamnagar refinery. The Indian government provides various fiscal incentives to export-oriented units.