SC to hear petition against courts&#8217; power to suspend convictions

SC to hear petition against courts’ power to suspend convictions

New Delhi: A Supreme Court bench headed by Chief Justice of India K.G. Balakrishnan will hear on Friday a petition that questions the power of courts to suspend convictions of politicians found guilty of criminal acts.

A public interest litigation (PIL) filed by three Lucknow-based lawyers—Hanuman Tripathi, Krishna Saran and Alok Saran—has expressed concern that “hard core criminals found guilty of abductions, murders, extortions and even terrorism are getting suspension of their convictions from courts", based on a 2007 judgement of the apex court that suspended a criminal conviction of former cricket player Navjot Singh Sidhu, who is now a member of Parliament representing the main opposition Bharatiya Janata Party (BJP).

Section 8 of the Representation of People’s Act bars individuals convicted for crimes that attract sentences more than two years from contesting elections.

Its sub-section 4, however, says that for incumbent members of Parliament the disqualification starts three months from the date of conviction to allow them to file an appeal.

“I had argued then (in 2007) that this (Sidhu’s case) would set a wrong precedent," said senior counsel Sushil Kumar Jain, who represented the Union government in the lawsuit and opposed his petition. 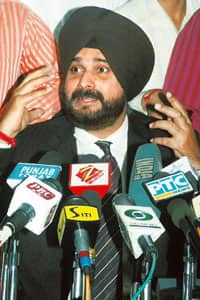 “The Criminal Procedure Code only allows for suspension of sentences with a view to preserve a person’s liberty, pending appeal. The Sidhu judgment was an expansion or bending of the Representation of People’s Act to that extent," said advocate Nitya Ramakrishnan.

She added that the PIL raises a relevant question. “I am not of the opinion that merely because a person is convicted, he should not contest elections. But there have to be some clear legislative guidelines on this. What are the parameters? What categories of convictions can be suspended?" she asked.

A recent survey by non-profit group National Election Watch has found that, as on 18 March, out of about 500 candidates for the Lok Sabha election announced by the BJP, Congress party, Bahujan Samaj Party, the Communist Party of India (Marxist), the Communist Party of India, and the Samajwadi Party, there are at least 42 candidates with criminal convictions that range from offences such as holding unlawful assemblies to murder.

Actor and Samajwadi Party candidate Sanjay Dutt’s petition seeking a suspension of his conviction in the 1993 Mumbai blasts case by a special court will come up for hearing before the Supreme Court on 30 March.

“We have finalized his (Dutt’s) name as our candidate for the Lucknow Lok Sabha seat and there is no alternative candidate for him. It is Sanjay Dutt for Lucknow and no one else for us," the party’s general secretary Amar Singh said.

On Monday, senior counsel and Congress spokesperson Abhishek Manu Singhvi represented Rashtriya Janata Dal member of Parliament Mohammad Shahabuddin and secured an order from the apex court directing the Patna high court to take up Shahabuddin’s case on the suspension of his conviction promptly before the phase for filing of elections in his constituency in Bihar would end on 30 March.