How Jayalalithaa made her political debut

An excerpt from Jayalalithaa's biography by Vaasanthi

The All India Anna Dravida Munnetra Kazhagam(AIADMK) party conference was organized on a big scale at Cuddalore, south of Pondicherry, and the whole town thronged to hear the star speaker who was to give her maiden political speech, which she had written herself. They mainly came to see a pretty face, and were instead treated to an impressive, fiery oration.

In the star-spangled politics of Tamil Nadu this was a new glamorous entry that raised many eyebrows. On 4 June 1982, Jayalalithaa had joined the ruling AIADMK party and became a card holder by paying one rupee.

At Cuddalore she was taken round the streets in a carnival-type procession which the DMK described in its party paper as the ‘Cuddalore cabaret’.

What made her take this first step into the political world? People who knew her said she was intellectually accomplished, had little in common with people from the film world and wanted to make the right use of her talents. She herself said it was her wish to be ‘of service to the people’. What remained unsaid was there were no other options left to her after her failed love affair and dipping fortunes in the film world.

She now sought to revive her relationship with MGR, who had become chief minister of Tamil Nadu for the second time. They had been estranged for nearly ten years. She realized MGR alone could give her the break she needed. Politics attracted her but she was aware of what politics entailed. The DMK seized on her remark that she had joined politics to ‘serve the people’ to make lewd comments, to the effect that Jayalalithaa had offered her body to serve the people, so the youth of Tamil Nadu should come forward to avail of her offer.

Many in the party had come to believe that she was out of MGR’s life when they parted in 1973. How did the rapprochement come about, after nearly a decade?

The man who was most shocked was of course R.M. Veerappan, now a cabinet minister in MGR’s government.

He came to know later that when MGR was on an official visit to the US, Jayalalithaa also happened to be there for treatment for her obesity. A common friend arranged a meeting between the two. One meeting was apparently enough for her to change the leader’s heart.

RMV’s fear was that, as a member of the party, she would not be a mere wallflower. She was ambitious. She would not be content with just parading as the AIADMK’s banner of glamour, or being the party’s ‘elegant sweetmeat that serves to attract votes like flies’ as the Tamil saying goes. She was full of confidence in herself and her capabilities. She said in an interview to a national English weekly, ‘I am not a person to be taken lightly.’

And she flaunted her closeness to MGR to make people believe that she was his chosen heir. From then on it became RMV’s mission to malign her growing reputation so that his leader was ‘protected’ from being ‘consumed by the evil’.

Solai, a veteran journalist and for some time political speech writer for Jayalalithaa, recalls that it was MGR who decided to bring her into politics.

He recalls, ‘Because of his duties as the CM, MGR could not attend public meetings like before. When Jayalalithaa, on her own, renewed her contact with him, it was a godsend to MGR. MGR needed someone to attract the crowds and to counter Karunanidhi, who had gone on a spree of vitriolic attacks on him at his public meetings. MGR decided to make use of her for public meetings. He asked me to train her to speak.

‘She instantly scored. The DMK was startled by the crowds that came for her meetings. She was capable of facing Karunanidhi’s barbs with effective repartees. All the district AIADMK secretaries were ready to build her up. The whole party went behind her. After thalaivar, it will be Amma, they came to believe. Then she was made the party’s propaganda secretary. RMV, S.D. Somasundaram and a few others in the party started actively working against her. But all the district secretaries and party workers were behind her. All their mischief failed in the end.’

Solai adds, ‘MGR was fond of her, that was obvious, and people thought it was natural if they had physical intimacy. But they never showed that intimacy in front of people. Both remained dignified.’

Jayalalithaa was clearly confident that she would be able to tackle her detractors in the AIADMK as long as she had the trust of her mentor MGR. She said to a magazine that her relationship with MGR was special.

‘Our relationship is very peculiar. Although he is so much older than me, every spare moment on the sets, we would spend talking to each other, discussing every subject under the sun. We used to talk about science, philosophy, literature. Both of us are deeply interested in classical music, astrology and astronomy. We have so much in common.’ 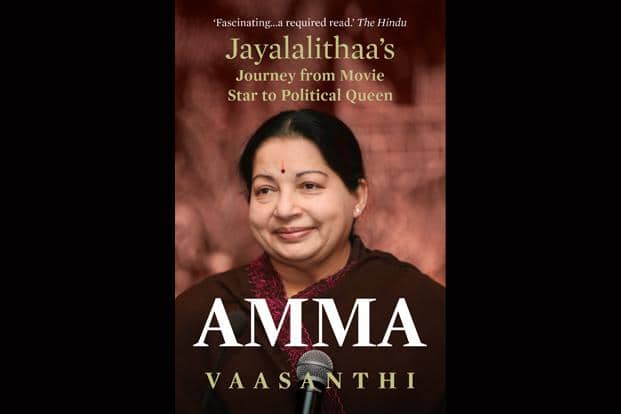 She went on to say, ‘He is everything to me. He is my father, mother, mentor, friend, philosopher and guide. He is my anchor. He will never let me down. He never lets down anyone who believes in him.’

Of course, she did not say ‘he is also my lover’, but the party cadres thought he was and that made her more special and lovable to them. They, who referred to MGR as Annan or elder brother, came to call her Anni – wife of elder brother.

When MGR made her the party’s propaganda secretary her stature and importance grew manifold. She very consciously set out to ‘de-glamourize’ her appearance, perhaps in an attempt to wipe out the stigma attached to her as an actress. It was a signal that she was serious about her political role. Solai says that he never saw her gaudily dressed. She hardly wore any jewellery. She always wore the simple white sari with the AIADMK party border. Even so, she looked stunning and the crowds yearned to see more of her.

She had a magnetic presence, and when she attacked Karunanidhi in her hard-hitting speeches, the crowds roared their approval. She had an effective tactic at public meetings, and took to addressing questions to the crowd: ‘Would you agree with Karunanidhi’s malicious talk? Will you say yes to him?’ The crowds would respond with a resounding ‘No!’ Praising MGR’s noon-meal schemes and other development plans and his goodness and generosity, she would appeal to the audience, ‘I am asking you; you tell me. Aren’t you on the side of puratchithalaivar?’ The crowd would reply with a thunderous ‘Yes!’ Her trailblazing trips across Tamil Nadu became a great success and was carefully watched by the sakunis in the party, who noted that her trips were arranged and organized in the same grand style and pomp reserved for MGR.

She did not stop with giving speeches. She gave the impression that her mandate from MGR was absolute. The AIADMK party headquarters buzzed with activity and Jayalalithaa’s office schedule was meticulously planned, to encourage party workers to come in hordes to make representations and seek her guidance in solving their problems. She forwarded the petitions to MGR with her recommendations.

Also read: Can Paneerselvam shift from lieutenant to leader without Jayalalithaa?

She took it upon herself to look into administrative lapses in the party, made surprise visits to noon-meal halls and pulled up errant workers. MLAs who did not visit their constituencies but spent their time visiting MGR’s Ramavaram Gardens residence were divested of their party posts. Senior members who missed party meetings were sent show-cause notices. People came to believe she did everything with MGR’s consent.

Inevitably, a hate campaign against her began to brew. Senior party members were worried at the speed with which her power was growing, and that this novice party member might soon be given a cabinet post, but MGR had other views. He needed someone smart in Delhi who could mediate between him and the Centre.

Jayalalithaa spoke excellent English. She was fluent in Hindi too. On 24 March 1984, he announced that Jayalalithaa had been nominated for the Rajya Sabha.

The seat given to her in the Rajya Sabha was Number 185, the same that C.N. Annadurai had occupied when he was an MP in 1963.

Jayalalithaa stole the scene wherever she was. Her maiden speech at the Rajya Sabha was widely acclaimed for its clarity of diction and elegant prose. Khushwant Singh, a fellow Rajya Sabha member, gushed that here was a beauty with brains. Even Prime Minister Indira Gandhi was impressed.

MGR now wanted Jayalalithaa to meet Indira Gandhi. Solai, who had also been sent to Delhi by MGR to be with Jayalalithaa, describes the meeting:

‘Congress was in alliance with the DMK. Our proposal was that Congress must have an alliance with the AIADMK. Jayalalithaa was told to impress this point on the PM. Jayalalithaa was given only ten minutes but they spoke for thirty minutes. Indira Gandhi was so impressed that when we were returning she sent Moopanar, Tamil Nadu Congress leader, on the same flight to broker the alliance.

‘But after the meeting with Indira Gandhi, Jayalalithaa did not at once report on it to MGR, as she should have done since she had been deputed by him. MGR was naturally anxious about the outcome.

When we were returning from Indira Gandhi’s house I told her, please speak to the leader about the meeting. She said “that will be done" a little carelessly. But she didn’t. MGR called me to ask what had happened. We departed the same day for Chennai and I asked her on the flight, “Didn’t you tell thalaivar about the visit?"

She said, “We are anyway meeting in person now. I thought we could convey it all then." This behaviour of hers, taking him for granted, sent out a wrong signal to MGR.’ She seemed to be becoming too big for her boots. The senior members around MGR kept stoking the cinders to ultimately create a conflagration.

Whether it was to pacify her detractors or to rein in Jayalalithaa, MGR announced at the party’s general body meeting that he was removing Jayalalithaa from the post of propaganda secretary.

MGR could see that the prominence he had given to Jayalalithaa had virtually split the party into two. His trust in her was slowly eroding. Or so it seemed.

Excerpted with permission of Juggernaut Books from Amma: Jayalalithaa’s Journey from Movie Star to Political Queen by Vaasanthi. Available in bookstores and www.juggernaut.in.