A courtroom of (and for) grandparents

Those convicted for abandoning senior citizens may face jail term of up to 3 months or fine of `5,000

Mumbai: An ambulance pulls up in front of the new administration building of the state labour court in Bandra, Mumbai, on Thursday, 26 July, as it will again on Tuesday. It ferries 96-year-old Shiva Chetanram Krip, the plaintiff, who has a fractured hip and must attend proceedings on the ninth floor, where a landmark case quietly unfolds. The defendant is Krip’s son, Bhagvan Shiva Krip, himself a senior citizen, and grandson, Prashanth Bhagvan Krip, 33.

Krip is the first senior citizen in Maharashtra whose case is being heard by the tribunal set up under the Maintenance and Welfare of Parents and Senior Citizens Act, 2007. He first filed for maintenance of up to ₹ 10,000 under section 5 in Pune, in May 2011. This, his second plea for the rendering of a gift deed allegedly taken by force to render his will invalid and void was filed under section 23 of the Act in April 2012. 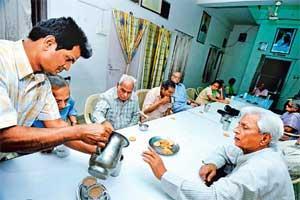 Krip is represented by advocate Sunder Navalkar. Navalkar, 91, who began practising as a lawyer in 1946, is a famed social worker and activist, and associate of the late Mrinal Gore. Naxalite leader Kobad Ghandy was her student when she was a professor at Khalsa College in the 1970s, and she is best known for her win in the Air India contract labour sweepers’ case in 1998. The son and grandson are represented by noted advocate Kranti Sathe.

Both lawyers refused to divulge details of the case as the matter is sub judice.

The Krip vs Krips case is being heard by sub-divisional officer (SDO) Ajit Sakhare.

The Act, which was notified in 2009, does not fall under the jurisdiction of any civil court, but takes on the powers of the civil court, and cases are tried by the SDO at the level of additional magistrate. Senior citizens abandoned by their children can apply for maintenance of up to ₹ 10,000 under this Act. Those convicted for abandoning senior citizens/parents could face a jail term up to three months or a fine of ₹ 5,000. It can make provisions for medical care, look into the establishment of old age homes, and issues such as voiding the transfer of property. The aim of the state-appointed tribunals was to spare senior citizens the runaround and the time taken by civil courts. Cases are to be resolved within 90 days.

While this is Maharashtra’s first case, tribunals in Delhi, and most effectively, Karnataka and Tamil Nadu, have been functioning since 2009. States such as Assam have still not implemented the Act.

The Krips case is the first of five that are in queue for hearing at the tribunal. The second case, that of Devyani and Gajanan Shantaram Mayekar vs their son Sudhakar Mayekar, is also ongoing.

Sakhare, the SDO, who also refused to divulge details of the cases, is particularly inspired by what senior citizens can achieve.

“Both lawyer and plaintiff are of such an age that it is an admirable sight," he said in Marathi. “As you age, your mind diminishes. But Navalkar is fit and sharp. She reads, drafts and argues with such acumen. She is quite aggressive and knowledgeable. I am quite inspired by the case."

Sakhare made it a point to catch a recent Satyamev Jayate episode on the elderly.

“I see them here, grandfather, son and grandson, and it reflects how the social structure has changed with time. People who shed tears for the show will not be able to sit through the cases that are beginning to appear before me," he says. “More such cases are coming up and it is required. It is a social evil, and I am glad that the government has implemented it so that there is some recourse for the elderly."

Until the Act, senior citizens who wanted to file against abandonment could do so under section 125 of the Code of Criminal Procedure, 1973, a section more used by women than the elderly. Still, under the code, landmark maintenance has been issued in cases such as Pandurang Bhaurao Dabhade vs Baburao Baburao Dabhade in 1980, when the court ruled that fulfilment of parental obligation is not a precondition to claim maintenance; or in Dr Vijaya Manohar Arbat vs Kashiram Rajaram Sawai (1987), which ruled that a daughter is liable to pay maintenance to her parents. Even with its limited powers, applications under the code have brought relief to all manner of elderly.

A tactic often used by lawyers was to delay and transfer the proceedings under various heads, prolonging cases until the senior citizen plaintiff passed away. This pattern is expected to be greatly altered with this Act.

One of the first victories for the maintenance tribunal of the central district of Delhi came in October 2009, when the tribunal ordered the son and daughter-in-law of a septuagenarian man, Komal Singh, to vacate his house in Prasad Nagar, Delhi, after he accused them of ill-treating and harassing him and his wife.

There is, of course, fear that the Act can be abused. Dossiers will start piling up soon enough on the shelves, a junior officer at the tribunal office warns. Senior citizens who feel slighted for no reason can file cases. Yet, the care of the elderly has been a matter of concern in India for some time now. The benefits far outweigh any perceived abuses of the Act, which lawyers say are standard for any law or Act.

According to HelpAge India’s 2012 report on Elder Abuse in India, which spanned 20 cities, 31% of older persons reported facing abuse, 24% of the elderly faced it on a daily basis, 75% of those facing abuse lived with their families, and 69% were the owners of the house in which they were being abused. Fifty-six percent faced abuse by sons, and 23% by daughters-in-law. More than 55% suffered abuse silently to uphold “family honour", 50% for periods of more than five years. The Delhi-National Capital Region (NCR) witnessed a rise in abuse from last year, with 29.82% of the elderly stating that they faced abuse, against 12% the year before; Mumbai followed a close second to Delhi-NCR with 29.46%. Bhopal ranked the highest in elder abuse with 77.12% elders stating that they faced this, followed closely by Guwahati with 60.55%.

An activist for the elderly and founder of the Dignity Foundation, Sheilu Sreenivasan believes the setting up of tribunals in Mumbai will have a greater impact on cases for the elderly throughout the country because of the sheer visibility of the cases and the progressiveness of urban tribunals. “Their setting up has been delayed due to repeated changes of (state) secretaries. The state had also reached out to NGOs (non-governmental organizations) like us. The mandate was for one tribunal per district, but it has been very difficult to set up. It is an extremely progressive step and it comes at a time when elderly abuse is at its peak. One hopes that they will become as effective for the elderly as family courts have become for those cases," Sreenivasan said.

The judgement in the Krips case, due within the next few weeks, could set a legal precedent for the rights of the elderly for years to come.