Starting with 1,500 students in 2000, the midday meal scheme run by Akshaya Patra Foundation has evolved to become the world's largest. It now aims to increase its reach to five million students by 2020

Bengaluru: Neha, a 12-year-old girl studying in class VII at Jeevan Bhima Nagar Government School, lives with her grandparents near Jagadish Nagar, a quiet suburb in eastern Bengaluru. Her mother died and her father rarely visits her. Her grandparents are daily-wage labourers.

“I want to be an engineer when I grow up," says Neha (who goes by her first name), with a smile.

Her classmate, Syed Fazal, also wants to be an engineer, while Eshwar and Vijay plan to become police officers. All four rush as the school bell rings at 12.15pm for lunch. 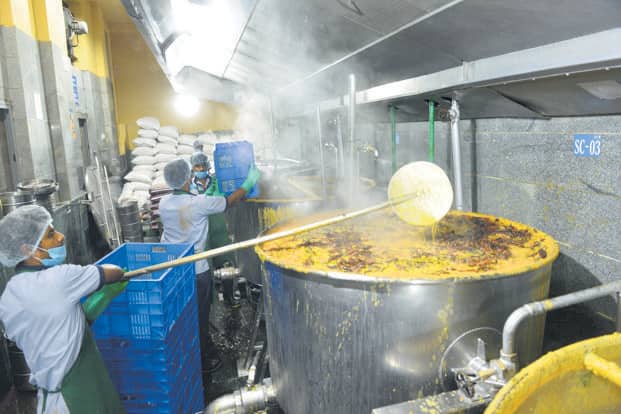 “There are many students who come to school just for the food and the milk. Parents drop them off early in the morning and leave for work," said principal S. Vishalaksha Shet. Children are also given milk every morning under the Karnataka government’s Ksheera Bhagya (free milk) programme.

Neha is among around 1.6 million students across India who are given midday meals, prepared in 34 kitchens of the foundation. 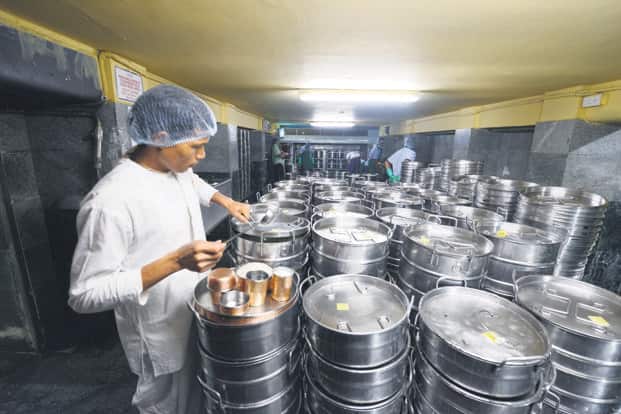 Since its inception in 2000, when it served 1,500 students, Akshaya Patra’s midday meal scheme has evolved into the world’s largest such programme catering to 13,839 schools. The foundation also delivers food to over 4,000 Anganwadi centres, benefiting more than 163,000 children.

It has served more than two billion meals and now aims to increase its reach to three million students by the end of 2018, and five million by 2020.

“Many evaluations have shown that midday meals (MDM) lead to an improvement in enrolment and attendance, both in India and globally. An evaluation conducted by professors from the Delhi School of Economics found that MDM increased attendance rates by 5%, particularly for girls in Delhi. A study conducted by the Indian Statistical Institute also showed that the attendance rates for girls increased by 12%," said Anushree Parekh, associate director of research and knowledge at Samhita, a Mumbai-based corporate social responsibility consultancy. 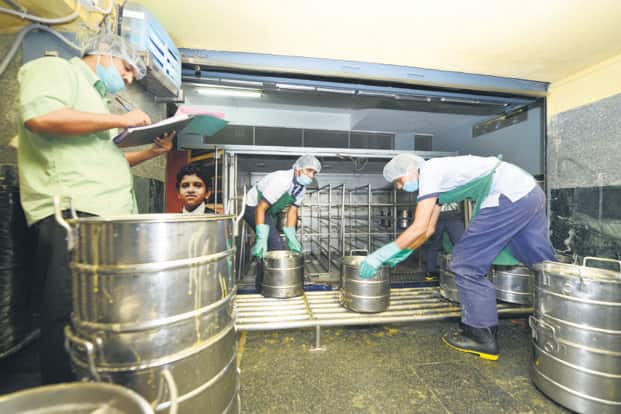 As per the 2016 report jointly released by the UNESCO Institute for Statistics and the Global Education Monitoring, 47 million youth of secondary and higher secondary school going age are not in school in India. “Once you start a kitchen, you give a child hope," said Shridhar Venkat, chief executive of the foundation’s India operations. He said the motive is to fuel aspirations of children by bringing them to schools, hoping that one day they will break barriers to soar ahead in life.

At 5.30am in the kitchen on the Iskcon (International Society for Krishna Consciousness) temple premises in north Bengaluru, around 10 staffers drag heavy loads of uncooked rice towards huge stainless steel rice cookers. Each of these drum-sized cookers can cook 100kg of rice in 15 minutes—enough to serve 1,000 students.

About 10 feet away, another large vessel churns out 1,200 litres of sambar, sufficient to feed about 600 children.

“We do not need professional cooks," said V. Arun Kumar, the manager of the kitchen, referring to the standardized cooking process to maintain the taste each time. A few turns of valves, and the sambar flows through many feet of complex piping into the next chamber.

Manjunath, the floor manager, watches and documents every step carefully. One floor above, vegetables are cleaned and cut—usually a day earlier, or at midnight.

With mechanized perfection, the staff moves the cooked food swiftly on trolleys and later fills it into airtight containers the size of barrels on a weighing machine. A short conveyor belt ride takes the food to the loading area, where it is neatly stacked onto specialized trucks that leave as early as 7.30am, as some schools are located nearly 100km away.

Hundreds of trucks make these journeys from 34 locations across 12 states, rarely missing a delivery.

“We run it (the foundation) like a person whose mind is that of a corporate and a head of not-for-profit," said Venkat.

Flush with funds, the foundation is investing in technological interventions like internet of things, blockchain, solar and bio-gas. New kitchens are also being readied in Uttar Pradesh and Chhattisgarh, among other locations which will take the total to beyond 50.

Venkat says earlier efforts have helped keep costs down despite rising inflation. One meal costs Rs10, of which about Rs6 comes from the government—state and centre—in the form of cash and grain subsidy and the remaining is raised through private donors.

“Feed a child for just Rs95. Call/SMS/WhatsApp/PayTm," reads one of their donation adverts, which are plastered on trucks.

Right from selection of vendors to cooking processes to delivery, the foundation adheres to the Food Safety Management System (FSMS).

Some of its practices include First Expiry First Out (FEFO) and First In First Out (FIFO) while issuing raw material. All raw material are inspected as per the norms laid down by Food Safety and Standards Authority of India. The foundation says all its kitchens use 5S (sort, straighten, shine, standardize, and sustain) and all its employees are trained in good hygiene practices. Thirteen of its kitchens are ISO-certified.

On the floors, staff are required to wear aprons, boots and hair caps at all times. Visitors are not allowed in the kitchen with outside footwear, and have to wear masks and hair caps.

Kumar says every step of the process is monitored and documented, from vendor selection and storage to transportation, to ensure the programme meets the brief every single time.

Food supplies are carefully inspected upon arrival and before cooking. Vegetables and other ingredients for the next day are stored in a specialized freezer. Rice is cooked at over 90 degrees Celsius to kill any bacteria that may remain after washing. The same process is used to clean large quantities of lentils used in the sambar.

Samples from each batch of cooked food are collected, labelled and kept aside in small containers for quality checks. Containers used to transport the food are sterilized every time they are brought back from schools.

“At any time we can have random checks," Kumar said.

“Scaling up of any social development programme will have an impact on quality. However, a corporate approach to development intervention through CSR/otherwise could take care of this issue. We have seen big NGOs like Akshaya Patra being supported by several corporates providing quality food which has resulted in improved literacy rate, increased attendance, enhanced educational performance, better health and nutritional status of children," said Abhishek Tripathi, director, CSR advisory, PwC India.

Moved by the sight of street children fighting with street dogs for food, Iskcon temple’s chief A.C. Bhaktivedanta Swami Prabhupada in the 1970s said, “No child within the radius of 10km of a Krishna temple should go hungry".

His posters, plastered on walls of the kitchen at Iskcon temple, serve to inspire the pressure, precision and purpose behind the initiative. The motto was later transformed to “No child in India shall be deprived of education because of hunger".

“Akshaya Patra is an NGO that runs like a professionally managed private company," said V. Balakrishnan, chairman of the foundation’s audit committee and former board member of Infosys Ltd.

A journey that began in Bengaluru by serving lunch to 1,500 schoolchildren back in 2000, now covers over 1.6 million students across 12 states in India. The wheel has turned full circle now. A fortnight ago, Akshaya Patra Foundation, UK—primarily a fund-raising unit for the India operations—began serving about 2,000 meals daily to students, homeless and seniors across five places in London.

“There are close to two million children from low-income groups in UK who go to school hungry that Akshaya Patra can help. There is enough of the first world in Bombay (Mumbai) and enough of the third world in London," Bhawani Singh Shekhawat, chief executive officer, UK and Europe operations, said on telephone.

The foundation carried out a pilot for six weeks last year, where they fed about a 100 students in a holiday club—a care facility for students when school is not in session. Students get lunch during school days, but for about 175 days in a year, when schools are shut, children may go hungry, Shekhawat said.

The foundation is looking to partner with the government, as well as borough councils and local communities to try and emulate the Indian model.

Haris Zargar contributed to the story.