Anna to restructure his team

Anna to restructure his team

Ralegaon Sidhi: With his team rocked by controversies, Anna Hazare on Monday said he plans to restructure his Core Committee to also give representation to religious minorities, tribals, dalits and youths to strengthen the campaign against corruption.

Hazare also hit out at the UPA government for targeting the key members of his team, alleging that those who are threatened by the Lokpal movement are attacking his supporters and close aides and trying to break his team. 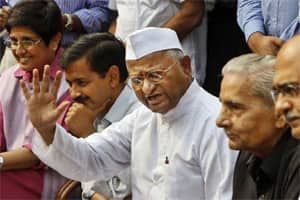 The social activist’s move to restructure his core team came against the backdrop of allegations that he was being misguided and used by his team members to fulfill their political agenda. Some key members in Team Anna--Kiran Bedi and Arvind Kegriwal--also faced alleged financial irregularities.

“We will take all sections in the Core Committee, Dalits, Muslims, Adivasis and all others. Nobody should complain that they were not given a chance," the anti-corruption crusader said.

“Even youth will be well represented. Youth’s power in Committee is extremely necessary. Youths from different communities will be picked for the Committee," he added.

Hazare recalled that when the Core Committee was formed there were complaints from some sections they were not not given representation.

“That Committee was for two-and-a-half months. But the Committee that we will form now will be for a much longer period," he added.

Hazare said he and his team will not be cowed down by anyone and challenged the government to show any evidence of misconduct or irregularities committed by his team members.