New Delhi: India will not sign a multi-billion dollar contract to buy European fighter jets before the fiscal year ends in March, the defence minister said about a deal to revamp ageing weapons in line with the country’s rising global clout.

However, India will “soon" announce the lowest bidder for the tender for 126 jets worth up to $15 billion, two government sources with knowledge of the deal told Reuters.

The Typhoon fighter made by four-nation consortium Eurofighter EADS is competing with Dassault’s Rafale jet to win what is one of the largest weapons contracts currently under negotiation globally.

“Not this financial year," defence minister A.K. Antony told Reuters in reply to a question about when the deal that has been in the works since 2007 would be signed.

“It is a long process. The file has not come to my table," he said, adding that the finance ministry and cabinet would have to look at the agreement after he signs off. 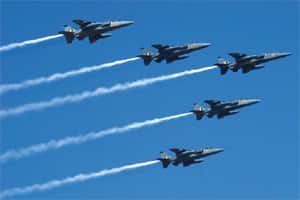 One defence ministry source with knowledge of the negotiations said each Rafale was $4 million to $5 million cheaper and the plane was preferred by the Air Force.

“Unit-wise, the French plane is much cheaper than the Eurofighter. Moreover, the Indian Airforce, which is well-equipped with French fighters, is favouring the French fighter," said the source, who asked not be named.

The source added the defence ministry was considering further extending the tender to buy an additional 80 or so jets, saying bidders excluded from the current process might be permitted to take part.