Home / Politics / Policy /  Explained: The Nepal earthquake and why more can be expected in the future
Back
Share Via

Explained: The Nepal earthquake and why more can be expected in the future

As the Indian plate pushes against the Eurasian plate, the southern part of Tibet that interfaces with India absorbes about 80% of this impact

The massive earthquake that shook Nepal and parts of India on Saturday was a result of the ongoing collision of two tectonic plates that form the outer shell of the earth.

The earth’s crust is broken into distinct regions called tectonic plates. The Himalayas was formed with the Indian plate constantly pushing against the Eurasian plate for over millions of years. The Indian plate is constantly moving north towards Tibet at the rate approximately 20 mm per year, according to IISc and scientists at the Jawaharlal Nehru Centre for Advanced Scientific Research (JNCASR) in Bengaluru.

An earthquake occurs when the earth’s crust cracks due to the movements along a so-called fault line. One section of the crust along the fault moves, or “slips", while the other is stationary, causing the crust to rupture. “The shallow nature of rupture (around 15 km at the epicentre) and the large magnitude of the slip (greater than 3 m) explains the devastation it wrecked", says C.P. Rajendran, a senior Aassociate with the JNCASR. 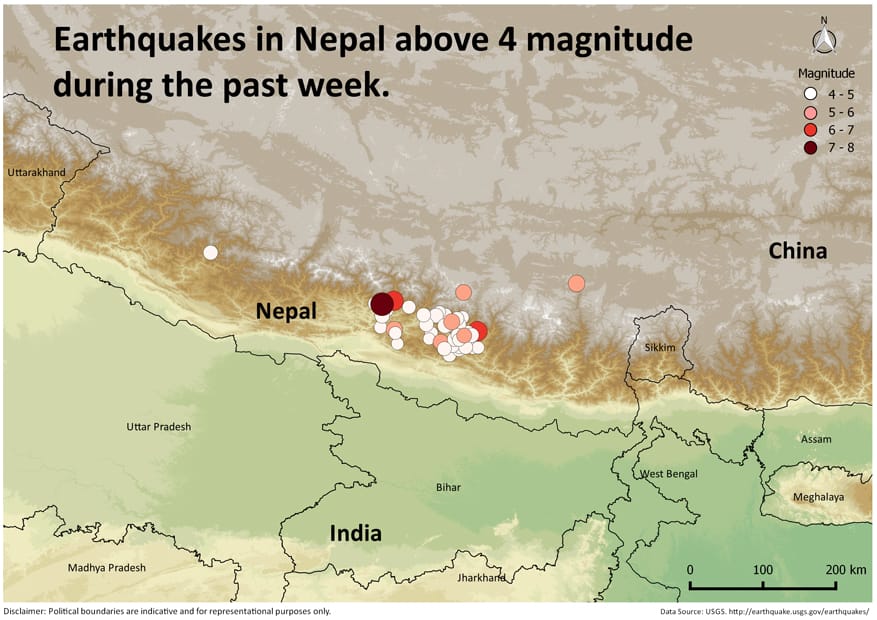 As the Indian plate pushes against the Eurasian plate, the southern part of Tibet that interfaces with India absorbes about 80% of this impact. The Tibetan plateau is situated north of the Himalayas, stretching approximately 1,000km north-south and 2,500km east-west, with many seams which are hundreds of kilometres long and generally in east-west direction. This means these regions are accumulating a large amount of strain, which is frequently released in the form of earthquakes.

“We find that some of the Himalayan segments show seismic quiescence for relatively long time, which means that strain that was accumulated there for several centuries has not been released. The central seismic gap or the central Himalayas is one such segment, which is matured to generate major earthquakes," said Rajendran.

The central Himalayas is what in geological terms is called a seismic gap which means that the strain is accumulating, only to get released anytime in the form of a great earthquake. “In fact, the present earthquake has released only a century of strain build-up", says Rajendran. “This region continues to be a zone that needs to be flagged for major seismic activity in the future," he said. Throughout the month, USGS expects several aftershocks of magnitude 5. These aftershocks will be felt in the current area where earthquake impact is being felt which would be around 200 km from the epicentre.