New Delhi: Despite Pakistan not budging on a key demand that it bring the perpetrators of the 2008 Mumbai terror attack to justice, India seems to be working towards a Pakistan visit by Prime Minister Manmohan Singh.

“There was no bypassing Mumbai," foreign minister S.M. Krishna said, referring to the 26-29 November terror attacks on Mumbai in which 166 people were killed. India blames Pakistan’s terrorist group Lashkar-e-Taiba for planning and executing the attacks.

However, Singh’s visit was not dependent on “Mumbai-related processes", Krishna said. 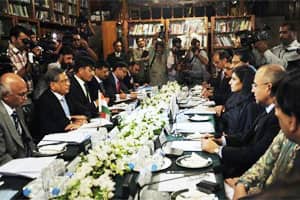 Pakistan has been keen on getting Singh to visit with several invitations from Pakistan’s president and prime minister pending.

India has been putting pressure on Pakistan to bring the perpetrators of the Mumbai attacks to justice. Pakistan has detained seven people in connection with the attacks but the trial has been slow. India is looking at allowing a Pakistan judicial commission to visit Mumbai to cross-examine witnesses in the Mumbai attacks’ case. During a previous visit, the commission was only allowed to record the statements of witnesses, which was deemed inadmissible as evidence against those under trial in Pakistan.

But despite differences on terrorism, their key dispute over Kashmir, the issue of demilitarizing Siachen glacier and the delineation of their maritime boundary in the Sir Creek area, both sides have decided to keep engaged—announcing that Indian and Pakistani officials would soon commence their third round of talks under the resumed dialogue process. The process was started in February last year after a hiatus of almost two years following the Mumbai attacks.

India and Pakistan signed a liberalized visa regime replacing a pact signed in 1974. The new pact allows businessmen of both countries easier terms of travel. Children and those above 65 years of age will not have to report to the police. The pact also provides for the issuance of group tourist visas for groups of not less than 10 and more than 50.

Both countries also signed a preliminary pact on boosting cultural ties, while a joint statement issued after the talks listed measures increasing contacts between the two halves of Kashmir administered by India and Pakistan. Cross-border travel would now include tourism and religious pilgrimage, the statement said. “Transportation links on both sides will be upgraded," it said and also spoke of increasing the number of items that can be traded across the de facto border in Kashmir.

Krishna described talks with Khar as “cordial, frank and positive". Khar, meanwhile, pushed India to shed the baggage of the past and build on the “convergences" as there was immense potential to normalize Indo-Pak relations. “We must not be held hostage by history," she said. “We must learn from missed opportunities and must commit to not lose further opportunities."

Khar said it was important to do so “because we must be able to disarm the naysayers".

“We must be able to disarm the people who will continue to want to divide us. So it is important that we are able to resolve these issues so that we can move forward and continue to consolidate on the success that we have been able to achieve so far and start viewing each other and looking at each other and coexisting as a part of the region," she said.

Kashmir has been the main issue for friction between the two South Asian rivals for the past six decades triggering three of their fours wars since 1947.