A US report says the evidence of global warming is stronger than ever, contradicting Donald Trump administration, who downplay humans' role in climate change

Washington: A massive US report concludes the evidence of global warming is stronger than ever, contradicting a favourite talking point of top Trump administration officials, who downplay humans’ role in climate change.

The report released on Friday is one of two scientific assessments required every four years. A draft showing how warming affects the US was also published.

Despite fears by some scientists and environmental advocates, David Fahey of the National Oceanic and Atmospheric Administration (NOAA) and several authors said there was no political interference or censoring of the 477-page final report.

“A lot of what we’ve been learning over the last four years suggests the possibility that things may have been more serious than we think," said Robert Kopp of Rutgers University, one of dozens of scientists inside and outside the government who wrote the reports.

Since 1900, Earth has warmed by 1.8 degrees (1 degree Celsius) and seas have risen by 8 inches. Heat waves, downpours and wildfires have become frequent.

It’s “extremely likely" — meaning with 95 to 100% certainty — that global warming is man-made, mostly from the spewing of carbon dioxide into the atmosphere from the burning of coal, oil and natural gas, scientists concluded. 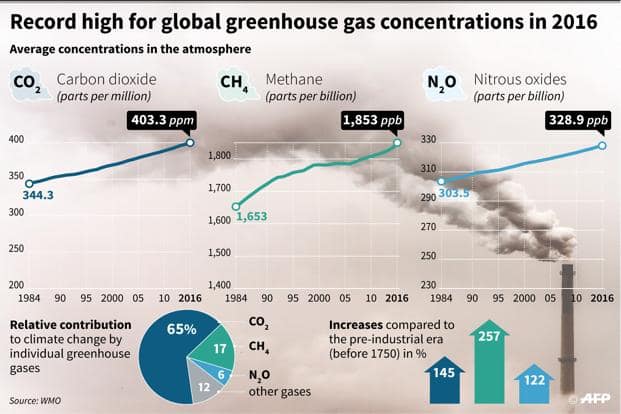 “Over the last century, there are no convincing alternative explanations," the report said.

Scientists calculated that human contribution to warming since 1950 is between 92% and 123%. It’s more than 100% on one end, because some natural forces — such as volcanoes and orbital cycle — are working to cool Earth, but are being overwhelmed by the effects of greenhouse gases, said study co-author Katharine Hayhoe of Texas Tech.

“This period is now the warmest in the history of modern civilization," she said.

For the first time, scientists highlighted a dozen “tipping points" of potential dangers that could happen from warming, things that Hayhoe said “keep me up at night."

They include the slowing down of the giant Atlantic Ocean circulation system that could dramatically warp weather worldwide, much stronger El Ninos, major decreases in ice sheets in Greenland and Antarctica, which would spike sea level rise, and massive release of methane and carbon dioxide from thawing permafrost that could turbo-charge warming.

Researchers did not provide an estimate of how likely tipping points would occur, but “there is certainly some chance of some of these things happening," Fahey said.

The report also documented how different climate change-caused events can interact in a complex way to make life worse such as the California wildfires and Superstorm Sandy five years ago.

The world’s oceans are under a “triple threat" — the water is getting warmer, more acidic and seeing a drop in oxygen levels, Hayhoe said.

In a 1,504-page draft report on the impacts of climate change, scientists detailed dozens of ways global warming is already affecting parts of the US.

Scientists said global warming is already sickening, injuring and killing Americans with changes to weather, food, air, water and diseases. And it’s expected to get worse, hurting the economy, wildlife and energy supply.

“Risks range from the inconvenient, such as increasing high tide flooding along the East Coast related to sea level rise, to ... the forced relocation of coastal communities in Alaska and along the Gulf Coast," the draft report said.

Outside experts said the reports are the most up-to-date summary of climate science.

“It shows that if anything the findings of scientists have become more dire" since 2013, said University of California, Berkeley climate scientist Zeke Hausfather, who wasn’t part of the work. AP