Agni V, an intercontinental ballistic missile, has a range of more than 5,000 km or the ability to reach northernmost China

New Delhi: India on Monday successfully test-fired its nuclear-capable, intercontinental ballistic missile Agni 5, that has a range of more than 5,000km or the ability to reach northernmost China.

“The three-stage, solid propellant surface-to-surface missile was test-fired from a mobile launcher from launch complex-4 of the Integrated Test Range (ITR) at about 1105 hours," said a Defence Research and Development Organisation (DRDO) official on condition of anonymity.

The missile was fired from Abdul Kalam Island off the Odisha coast.

“The successful test-firing today will pave the way for user trial of the most potent Indian missile and its eventual induction into the special forces command," the official said.

All the radars and electro-optical systems along the path of the missile—especially at the mid-range and at the target point—monitored and displayed all parameters in real time, the DRDO official added. 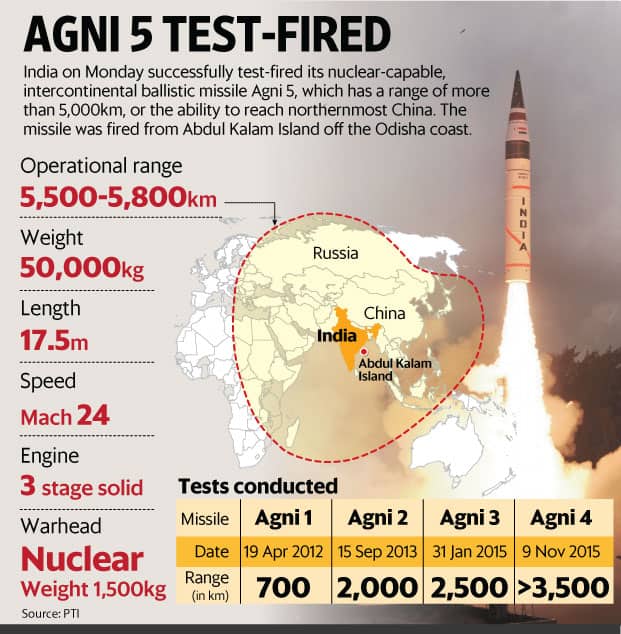 He said that of all the Agni series missiles that India has tested so far, the Agni 5 is the most advanced, with inbuilt new technologies for navigation and guidance, warhead and engine.

The integrated guided missile development programme (IGMDP), conceptualized by the defence ministry for missile research and development (R&D), has spearheaded the Agni missile programme, which was managed by DRDO. India already has the Agni 1, 2, 3 and 4 missile systems and supersonic cruise missiles like Brahmos, and an Agni 6 is reported to be in the R&D stage.

Lauding the launch, defence experts said the missile will lend credibility to India’s defence technologies—given the sharpening conflict between India and Pakistan over the past few months.

“The successful launch of the Agni 5 sends a strong message on India’s strategic capabilities," said C. Uday Bhaskar, director of the Society for Policy Studies.

“The IGMDP is a successful rise in the right direction, in case there is a threat in the region," Bhaskar said, noting that the accuracy of the missile—measured by the circular error probability—was a significant factor. For a launch to be successful, a missile needs to hit within 100 to 200 metres of the target.

The Agni 5 has a range of more than 5,000km and can carry a warhead of about 1,000kg. The solid propellant driven missile, which is 17 metres long and weighs about 50 tonnes, was test-fired from a canister giving it all-weather and all-terrain mobile launch capability.

The Indian Army said the successful test fire of the missile would give a fillip to India’s defence technology. “This launch will enhance India’s nuclear and missile deterrent value in the entire Asia-Pacific region. It will only make our defence capabilities more comprehensive and extensive," said a spokesperson from the Indian Army’s Northern Command.