Nasa says Cassini has detected hydrogen molecules in vapour plumes emanating from cracks from the surface of Saturn's moon Enceladus, necessary for life

Dallas: All of us can thank water for helping life emerge from the remnants of the big bang. Earth is awash in that slippery combination of hydrogen and oxygen, but we’ve always thought the rest of the solar system is mostly barren rock, noxious gases, and ice made from some really nasty stuff.

This is not entirely the case, it seems. Nasa announced on Thursday that a subsurface ocean has been detected on Enceladus, one of Saturn’s moons, with hydrogen pouring into it from hydrothermal activity on the sea floor. The gas could potentially provide a chemical energy source for life, researchers from the Cassini project to Saturn and the Hubble Space Telescope report. The findings suggest that Enceladus has an ocean below its surface similar to the one believed to exist on Europa, one of Jupiter’s moons.

“Although we can’t detect life, we’ve found that there’s a food source for it," said Hunter Waite, lead author of the Cassini study. “It would be like a candy store for microbes."

Researchers using Hubble also found large plumes of gas and ice erupting on Europa, which is about the size of Earth’s moon and the smallest of Jupiter’s four satellites. Some plumes, located in the moon’s warmest regions, rose as high as 62 miles.

Heat on the ocean floor

Underwater vents on Enceladus may resemble the ones seen on Earth’s ocean floors, where microbes and other sea life congregate in or near the superheated water, often at extreme depths.

“This is the closest we’ve come, so far, to identifying a place with some of the ingredients needed for a habitable environment," said Thomas Zurbuchen, associate administrator for Nasa’s Science Mission Directorate. “These results demonstrate the interconnected nature of Nasa’s science missions that are getting us closer to answering whether we are indeed alone or not."

The data suggest that Enceladus and Europa have geographies that could foster life—a salty ocean atop a rocky core that’s providing an energy source in the form of hydrothermal venting. Chemicals needed for life formation include carbon, hydrogen, sulfur, phosphorous, and nitrogen. No phosphorus or sulfur has been found on Enceladus, but scientists suspect their presence. 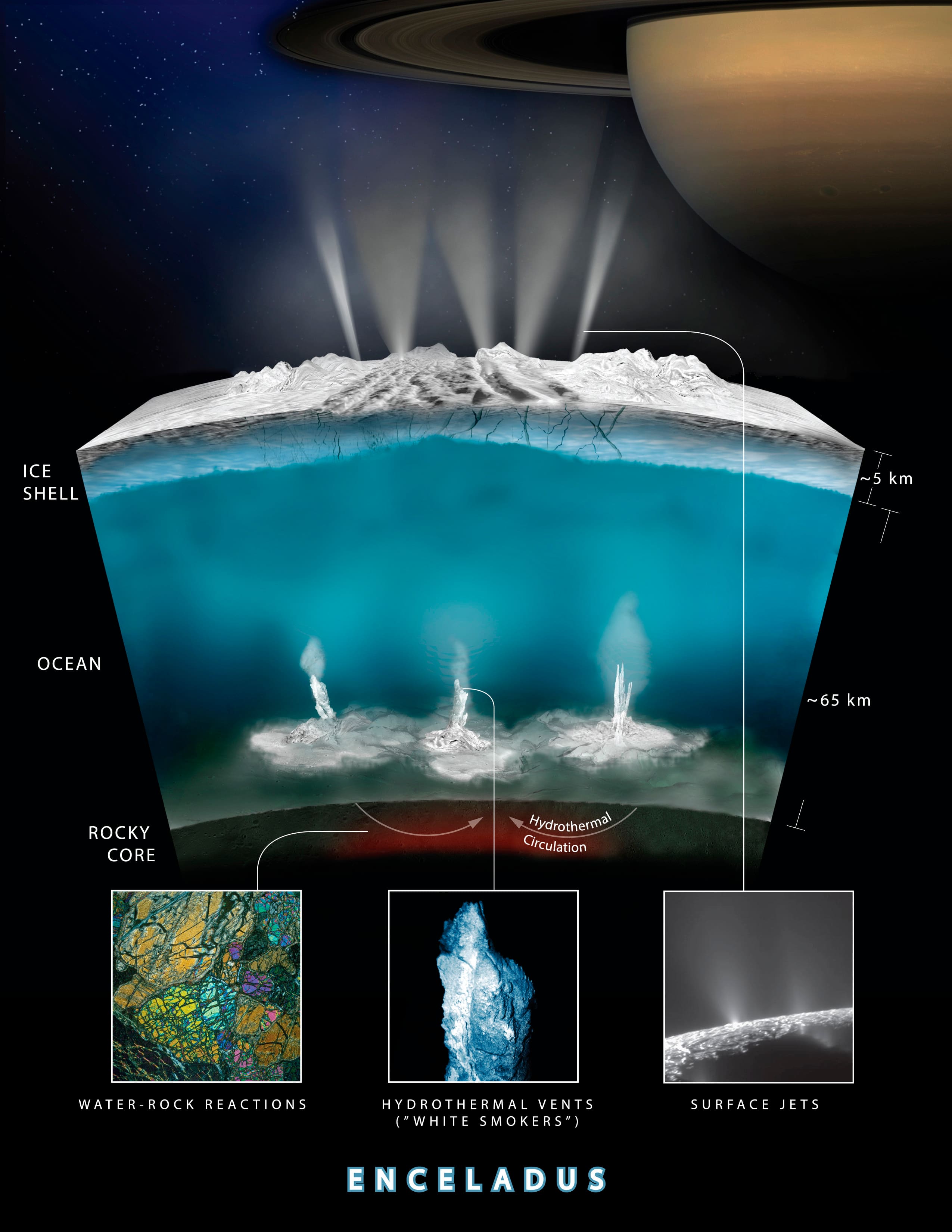 An illustration provided by Nasa on Thursday shows what scientists on the space agency’s Cassini mission theorize how water interacts with rock at the bottom of the ocean of Saturn’s icy moon Enceladus, producing hydrogen gas (H2). Photo: AP/Nasa

Given the findings, the tantalizing question for scientists is whether biology operates elsewhere in a fashion similar to that of our planet. If water, energy, and chemical building blocks are present, according to this line of thinking, then the odds of a microbe or other organism may rise dramatically.

On 26 April, Cassini will begin what Nasa has dubbed its “ grand finale " with 22 diving orbits within the region between Saturn and its rings, culminating in a final, fiery plunge into the atmosphere on 15 September.

Today’s news comes as Nasa is eager to secure funds for its planned Europa Clipper mission to the Jupiter moon. A salty liquid water ocean beneath its icy crust may contain the trio of elements necessary for life: liquid water, chemical ingredients, and energy sources.

Europa Clipper’s journey is set tentatively for the 2020s, although future funding hasn’t been secured. In February, Nasa moved Europa into a preliminary design phase after the project passed a major agency review. The mission plan includes 40 to 45 flybys to image Europa’s icy surface at high resolution and investigate its composition and interior structure. Europa orbits about 417,000 miles from Jupiter, and is exposed to extreme radiation levels from the planet, which further complicates exploration.

The theory of life on Europa has been around for awhile. Hollywood explored this terrain in the 2013 film Europa Report , depicting a crewed mission to the moon and investigation of its subsurface ocean. Before that, the 1984 movie 2010 , a sequel to the Stanley Kubrick masterpiece 2001: A Space Odyssey , explored the suspected possibility of life under Europa’s frozen exterior. Bloomberg