Dengue deaths on the rise in Tamil Nadu

Chennai: The number of dengue cases is on the rise in Tamil Nadu. While the ruling All India Anna Dravida Munnetra Kazhagam (AIADMK) government is being criticised for the handling of the menace, it claims it’s taking all possible measures to counter it.

The statistics are alarming. State health secretary J. Radhakrishnan on Sunday said that as many as 35 people have died due to dengue in the state.

A Times of India report on Wednesday said that public health officials have confirmed 40 deaths due to dengue and an equal number of casualties due to viral haemorrhagic fever or shock syndrome, triggered by dengue, since January.

According to the directorate of National Vector Borne Disease Control Programme (NVBDCP), 11,552 cases have been reported in Tamil Nadu this year, a 350% increase in the number of cases compared to last year.

About 30 fresh cases are recorded in Chennai every day, according to the state health department. “There are about 700 cases across the state, per day," Radhakrishnan said.

The CMCH alone handled 1,319 dengue in-patient cases in August, which is the highest monthly volume in the last several years, according to a report by The Hindu published on Tuesday. 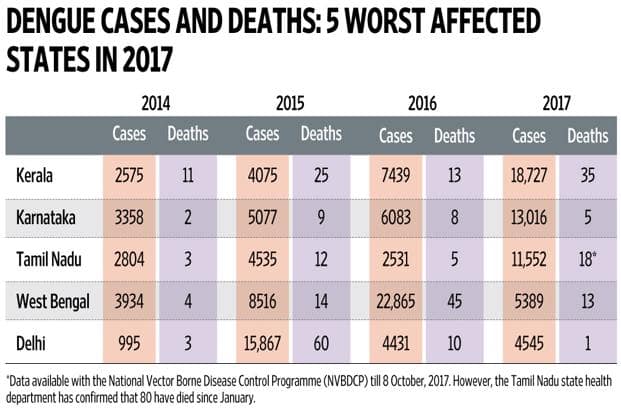 Chennai, at the Rajiv Gandhi Government General Hospital, of the 2,950 patients who have been admitted with fever, 519 have tested positive for dengue. More than 500 have been discharged.

The Tamil Nadu government is facing strong criticism from all quarters over the handling of the “health emergency", though it claims it is taking all possible measures to curb the menace.

The leader of opposition and Dravida Munnetra Kazhagam’s working president, M.K. Stalin, accused the Edappadi K Palaniswami-led government of “taking no efforts to control the spread of dreaded disease and concentrating only in participating in MGR centenary events".

The state government, which has kicked off several dengue prevention activities and awareness initiatives, has begun to observe Thursdays as anti-dengue day.

On Tuesday, health minister C. Vijaya Baskar said dengue shock syndrome and dengue-related haemorrhagic fever would be covered under the chief minister’s Health Insurance Scheme. Those admitted in intensive care unit with dengue could claim Rs2,000 per day under the scheme.

Meanwhile, Radhakrishnan said on Tuesday that the health department has issued notices to 20,000 commercial establishments and homes, over the past week, across the state to clear the breeding sources of mosquitoes.

“Curbing the breeding of the dengue-causing Aedes mosquitoes should be the focus. This will significantly bring down the number of new cases," said Sumanth Raman, a Chennai-based medical practitioner.

Another important measure is to identify the dengue patients who are at a higher risk of suffering from Dengue Hemorrhagic Fever (DHF) or Dengue Shock Syndrome (DSS), Raman added.

Doctors suggest that dengue becomes dangerous when it progresses into DHF and DSS and patients who are vulnerable to these include children, pregnant women and elderly people.